It’s autumn, and you know what that means …

“Oh my gosh, I love eating congealed baby food!” said no one ever. 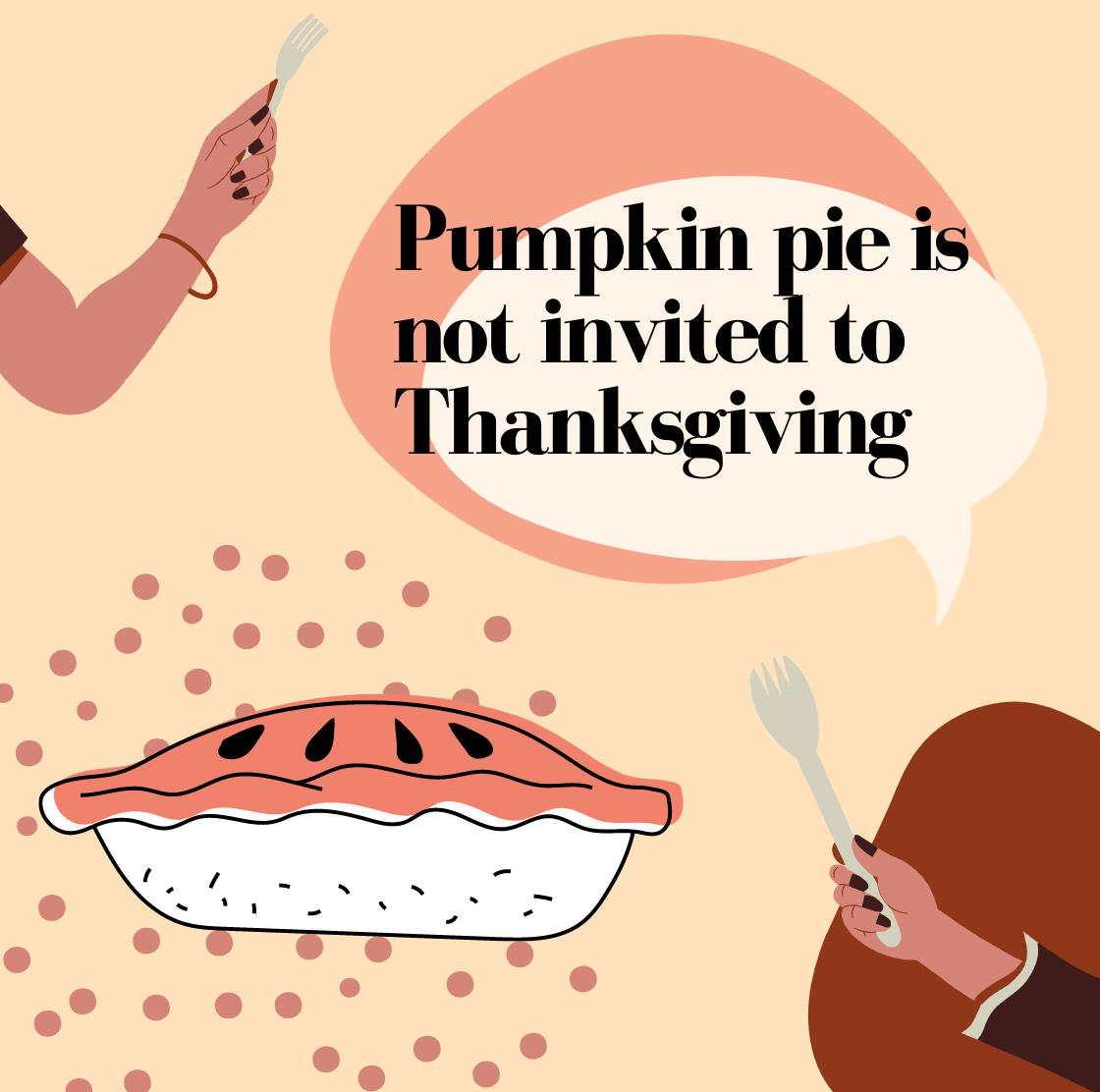 That’s right. Pumpkin pie is not good. I’m not saying it’s the worst — pecan pie holds that honorable distinction, which is an issue for a different day — but it’s certainly not the best.

No more! We must emerge from the fog that has shrouded us from reality for too long. Hold onto your turkeys, my friends.

First referred to as pyes in medieval Europe, pie evolved from ancient Grecian and Roman pasties and has become an integral part of international cultural gastronomy. The apple pie first emerged in popular culture in 1589 when it was referenced by poet Robert Greene, and a 1675 cookbook contains the first record of pumpkin pie.

Since then, the American Pie Council has developed, pie eating and baking contests have risen in popularity and intellectual discussions have emerged about food and baking. As one contributor to this discussion, chef and The New York Times columnist Samin Nosrat said the four elements of good cooking are salt, fat, acid and heat (temperature).

Yet, pumpkin pie is painfully one-noted: one unnerving texture, one stodgy flavor. Not to mention that the flavors you are tasting in pumpkin pie or anything that boasts “pumpkin spice” aren’t actually from real pumpkin. Not to burst your bubble, but you’re tasting a specific blend of distinctly non-pumpkin spices in an attempt to make the thing palatable.

There is a lack of complexity of flavor in pumpkin pie, owing to the absence of both acid and temperature from its cooking process. Even if you enjoy the texture of custard pie, others within that category — including chocolate, traditional custard, coconut and lemon — have more interesting flavors.

Furthermore, apple pies — and other fruit pies — are layered and complex. In fact, 19% of Americans cite apple pie as their favorite type of pie. Apples are delicious by themselves and are simply enhanced by spices. Apple pies contain all four elements of good cooking, as defined by Nosrat. A rich, buttery crust and sweet, tangy apples, with the heat aspect continuing beyond the baking time. Heat transforms and evolves the apple pie — caramelizing the filling and crust — leading to an improved depth of flavor and variation in texture.

I understand that it’s easy to fall back onto nostalgia or tradition when arguing in favor of pumpkin pie.

We have elevated a subpar food to a level of confusing reverence in the national psyche.

“But it’s Thanksgiving! This is the only time I will eat pumpkin pie.”

“I just love the message of Thanksgiving! We must have pumpkin pie!”

We have elevated a subpar food to a level of confusing reverence in the national psyche. Mediocrity is contagious, and with pumpkin pie’s comforting familiarity, the “eh-ness” of pumpkin pie continues to appear on our plates when Thanksgiving comes around, just like clockwork. What else will we settle for?

As a category, pie has become an element of our identity. Odd, perhaps, but Americans have a tendency to express their patriotism in strange ways.

The apple pie is the official state pie of Vermont and is supported by specific legislation that encourages maximum enjoyment of the food. Meanwhile, peach pie takes center stage in Delaware, key lime in Florida and blueberry in Maine. Illinois hitched its wagon to pumpkin pie as its state-designated pie and Texas has pecan pie.

You are welcome to form your own conclusions with that information.

Apple pie has long been associated with national pride, the simple joys in life and family. Pumpkin pie celebrates Thanksgiving — a time for reflection and thankfulness — but also a holiday derived from a period in American history of brutal colonization, violence and European immigrant-spread disease. We shouldn’t be so quick to gloss over the holiday’s historic roots, baking ourselves a pretty little fairy tale and elevating the pumpkin pie to a picturesque emblem of “patriotic” colonialism.

I don’t advocate the total and utter boycott of pumpkin pie (although you wouldn’t hear me complaining if such a thing did happen). I simply believe we should lower pumpkin pie from the turkey-themed pedestal on which it stands. Do not let herd mentality control you. Celebrate the pumpkin pie, if you wish, but do it because you believe in its merits, not because everybody else does.

Tradition is poor justification for the perpetuation of mediocre or just plain poor practices.

Face it: Pumpkin pie is not good.

Toni Shindler-Ruberg looked at a lot of pictures of pies when researching this article and is now hungry.