The Daily Nexus
Recipes
Five Ways To Use Extra Pumpkin Puree: Savory Plant-Based Edition
November 25, 2020 at 12:29 am by Celine Pun

Bless the food banks for offering cans of pumpkin puree in preparation for the upcoming autumn holidays. Not going to lie, the five cans between my family and friends sparked joy and stress at the same time. Having an excess of anything feels suffocating in a clutter-free space, so I decided to look for ways to make the most of this pumpkin abundance. Here are five of my favorite savory pumpkin recipes:

This is the third time I have tried making gnocchi. This chewy pasta is made with boiled potato, all-purpose flour and a little salt for flavor. Adding pumpkin puree elevates this dish with a hearty sweetness. Formed from rolling logs into bee shapes, this gnocchi is fun to make with friends and family.

I used a recipe from “Sweet Simple Vegan,” a vegan blog run by partners Jasmine and Chris. I did not have sage leaves, though; part of me wanted to go for a walk on the cliffs by Manzanita Village, plucking leaves from the purple sage bushes. However, dried thyme was in my spice rack so I tossed a tablespoon of that into my extra garlicky butter sauce, having doubled the number of garlic cloves as I am pro-garlic. I bet dried basil or dried parsley (or either fresh) would have added a similar savory herb kick to this dish, as well. I also stuffed some of the gnocchi balls with cheese, because why not? 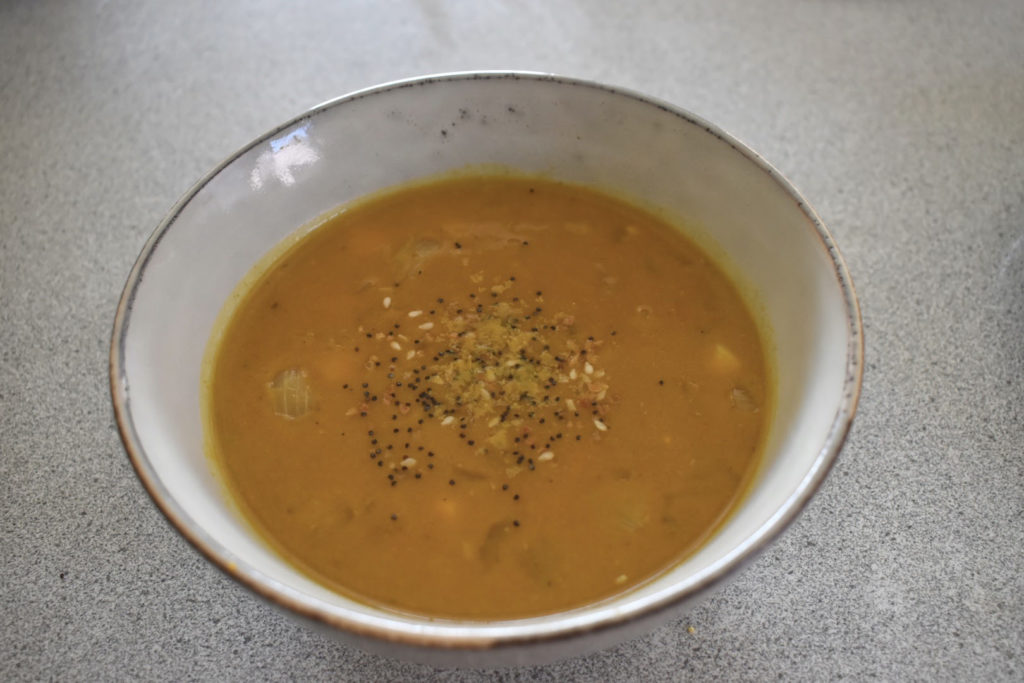 Autumn is the unspoken start of soup season. I have made corn chowder, miso soup and this morning: pumpkin soup. Leaving the soup in a big pot on the stove and sipping it throughout the day is a clever way to have convenient meals during a busy day.

This recipe is from “Salt & Lavender,” a vegan blog by Natasha Bull. I used soy milk instead of coconut milk because bulk soy milk from Costco is cheaper for someone who consumes soy milk religiously and is out of coconut milk. My pantry is abundant with canned corn, so I popped one in. I doubled the garlic clove count as well. Finally, no creamy vegan soup is complete without being drowned in nooch (nutritional yeast). 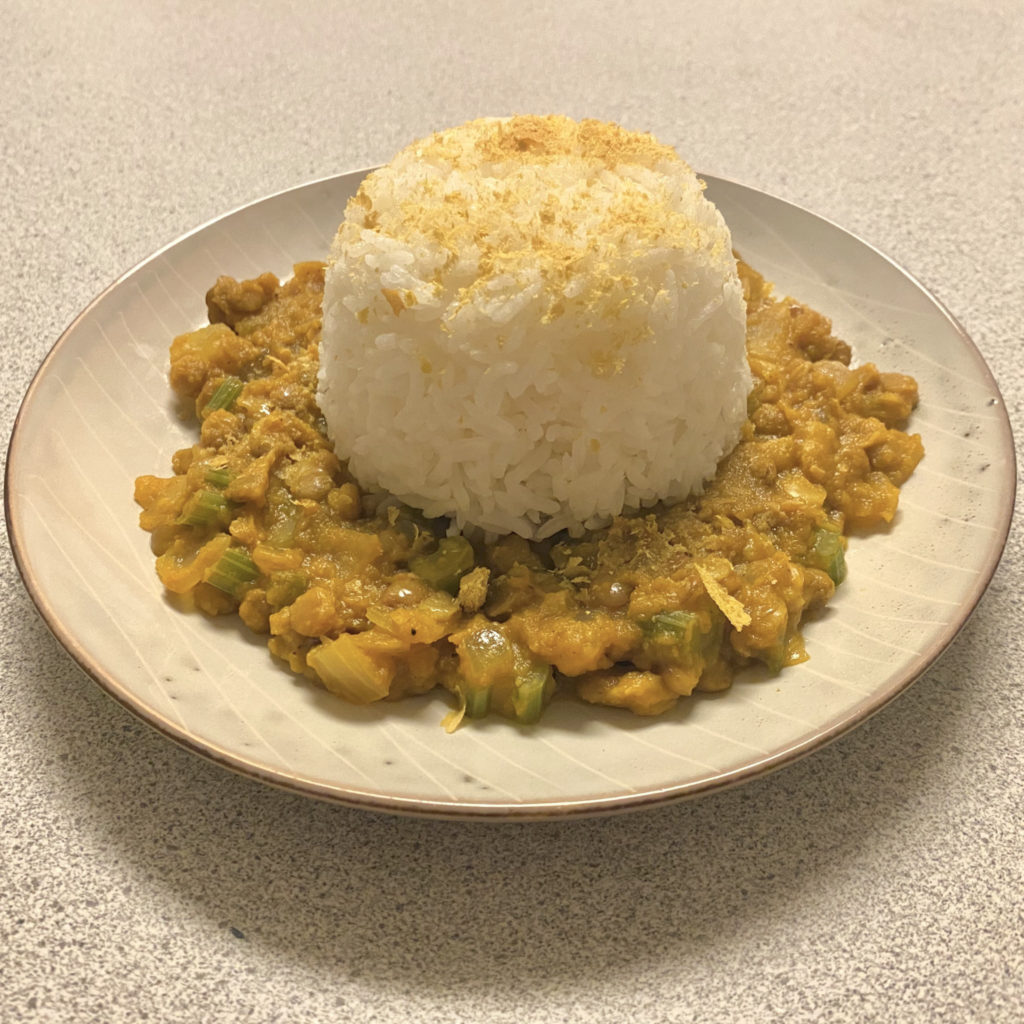 Curries are one of my favorite meals because they tend to be made from one-pot recipes and I can mass produce them for meal prepping. If I was feeling lazy, I would buy Japanese curry blocks instead of playing with the seasonings in my spice rack and heat up instant rice.

This dish is loosely based on a recipe by Shannon from her vegan blog “Yup, it’s Vegan!” First, sweat the aromatics: onion, garlic, ginger. Add curry powder, then the rest of the ingredients. I soaked my lentils that morning so I only boiled them for 10 minutes and used soy milk instead of coconut milk. I also added celery, but I should have also sweated the celery as it was too crunchy, even after sitting in the vegetable broth for 10 minutes. I wanted to add carrots and potatoes, but my midweek fridge was hollow from skipping a grocery shopping run on the weekend. My housemates and I felt that this curry was missing something, so we drowned the curry in mirin and sugar, simmering it for longer. I paired the curry with my favorite Thai jasmine rice and topped it with nooch.

If you are tired of using traditional marinara or Alfredo sauce with your penne or spaghetti, try this pumpkin pasta sauce. Adding a refreshing autumn zing to an affordable meal for college students makes cooking a worthier experience.

This recipe is by Jolinda Hackett of “The Spruce Eats” blog. I love how this recipe is a one-pot kind of recipe and I already had everything in my pantry from the Associated Students Food Bank. Pumpkin has such a sweet flavor, but pouring it over sauteed onions and garlic gives the pumpkin a refreshing salty undertone. Adding some grated ginger and lemon zest spices this recipe up even more. Drowning the sauce in nooch is also a classic plant-based move. 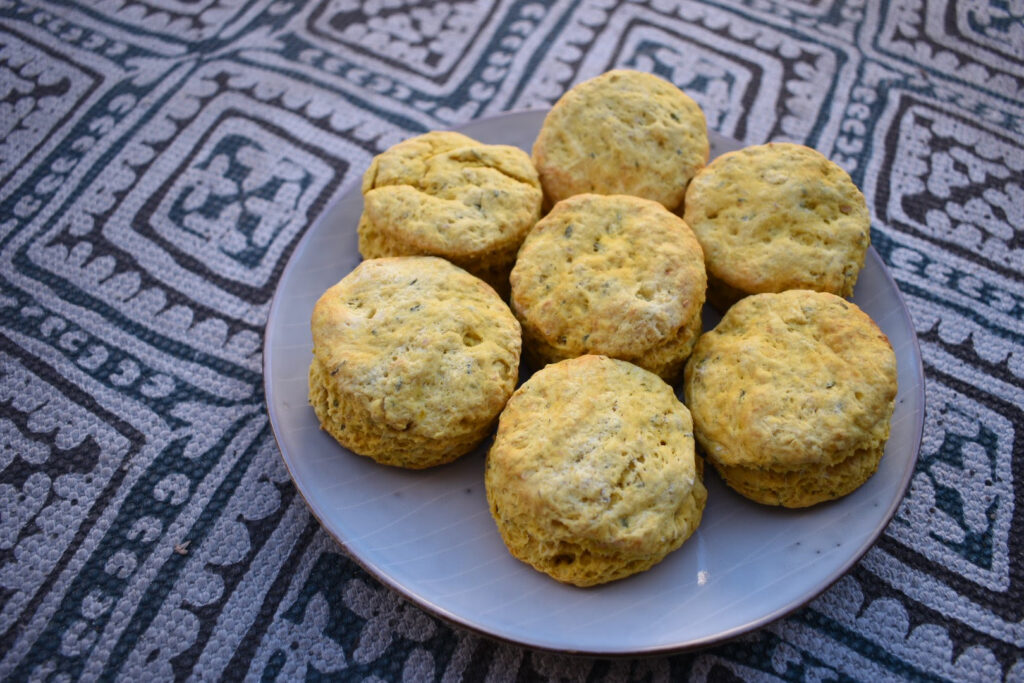 Growing up, I was obsessed with biscuits. My family often went to KFC and Popeyes, and I would look forward to their biscuits every time. The buttery, flaky pastry pairs nicely with any hearty meal, including curries and soups. I love peeling the layers with my fingers, savoring the biscuits in my mouth.

This recipe is by Richa of “Vegan Richa,” and I love her suggestion of adding herbs to the batter. I added thyme and parsley because I did not have sage on hand. I also folded the dough several times to create flaky layers like for croissants, except the dough never went into the freezer. Then, I brushed the top with coconut oil in an attempt to create that golden-brown coat, but I do not think that it made any difference.

The early mornings spent baking and cooking perfused our house with scents of cinnamon and sighs of satisfaction from my housemates, turning pumpkin stress into a fun autumn experience.