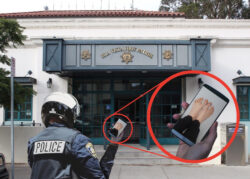 While most of us won’t admit to our unusual fetishes, the I.V. Foot Patrol wholeheartedly embraced their non-platonic feelings toward these appendages attached to our legs — but at what cost?

“I feel really uncomfortable with the name,” confessed a second-year student who wished to remain anonymous. “What’s next, the I.V. Piss Patrol?”

The Foot Patrol, formerly recognized as the on-foot Isla Vista police, now spends their time scouring the streets for any sign of feet, whether it’s through a hole in a shoe, sandals or even barefooting. Especially barefooting.

“One time, the Foot Patrol caught me selling answers to a midterm,” fourth-year Kayla Pied admitted.  “I flashed them my feet and went on my way, no charges pressed.”

The Foot Patrol, however, denied all affiliation with these 10 digits. “We’re here to keep Isla Vista safe, not to look at toes,” they stated. Minutes later, four members of the Foot Patrol were found trailing behind a surfer heading to the beach, ogling his freshly manicured — and quite bare — phalanges.

Despite the Foot Patrol’s vehement claims that their minds remained foot free, signs began to decorate Isla Vista, shaming them and their foot fetishes. “Hide Your Feet — Here Comes the Foot Patrol!” one sign read, with another advertising, “My Feet Aren’t Yours To Look At.” The kinkshaming continued throughout the week until the Foot Patrol decided to put a stop to it.

With signs of their own, the Foot Patrol took to the streets. “Looking at Feet Protected by First Amendment,” one sign proclaimed, along with other infamous sayings like “Give Me Feet or Give Me Death” and “Kinkshaming Is My Kink.” As they marched through the sign-strewn roads, they chanted their own rendition of Paradise City: “Take me to the I.V. city where the toes are bare and the feet are pretty!”

Whether the war between Isla Vista students and the I.V. Foot Patrol has cooled down is yet to be determined.

This is really hilarious! Baja Blastt you have a future as an comedian and or a writer of the craft.