Last Saturday, as part of the Pollock Theater’s Script to Screen series, Pollock Theater director Matthew Ryan moderated a lively discussion with “Birds of Prey: And the Fantabulous Emancipation of One Harley Quinn” screenwriter and co-producer Christina Hodson. 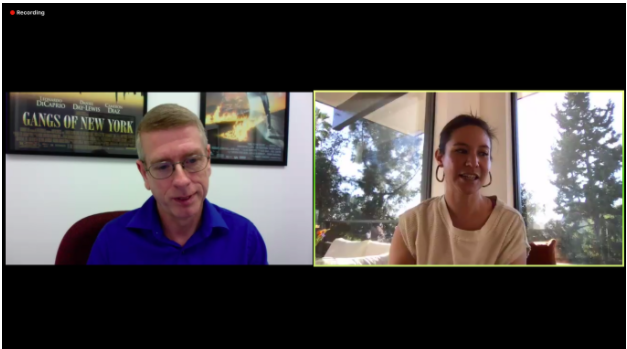 A followup of 2016’s blockbuster “Suicide Squad,” “Birds of Prey” follows the now-iconic Harley Quinn (played by Margot Robbie, who also served as co-producer on the film) after her breakup with the Joker. Over the course of the film, she teams up with four other women, forming the eponymous Birds of Prey. However, as Hodson said, this is not “just another superhero team-up movie.”

“They’re all so different is what I love […] they’re such interestingly unique, different, contrasting characters,” Hodson enthused. When Robbie and Hodson first started working on an “R-rated, ensemble, Birds of Prey, thing,” they had nothing but an “unimaginable amount of comics” and the power of the smart-mouthed, often unhinged, Harley Quinn and a desire to flesh out the character in new ways.

“Initially it was Margot and me in a vacuum,” but luckily, as Hodson quickly revealed, she and Robbie have a deep understanding of Harley Quinn, of what she “would and wouldn’t do.” “She is an antihero and an anti-villain,” said Hodson, and truly, this ambiguity and thrilling sense of chaos is what keeps audiences coming back for more.

Hodson praised the performances of her star-studded cast throughout the discussion, particularly those of Robbie and Ewan McGregor, who played the film’s villain, Black Mask. She gushed over McGregor’s comedic mastery of her own jokes, saying “he does them so much better than I ever wrote them, he just brings this magic to everything.” Of Robbie, she declared, “there are very, very few actors working right now who have that range” that can be convincingly murderous one second and touchingly vulnerable the next.

In the film, the antihero team comes together in what Hodson refers to as “glancing encounters between them […] impacting each others’ lives without really knowing they’re impacting each others’ lives.” Though not the most cohesive group, they are all tied together by one desire: emancipation. By the end, “they’ve all freed themselves from the various traps that they were in” and become the Birds of Prey.

When asked about the themes of the film, Hodson revealed that the theme of emancipation was not initially something she considered, but said that “the themes do come alive as you’re writing the project.”

At one point, Hodson pulled out a photo of her original outline of the film, which hangs framed on the wall of her home, composed of colorful sticky notes and masking tape on butcher paper. This project is, clearly, one of love.

As far as her own origin story, Hodson started as a script reader at Heyday Films, which produced the “Harry Potter” movie series. During her time at Heyday, “[she would] read two scripts a day and write coverage on two scripts a day,” a practice she recommended to aspiring screenwriters.

Though she started out on the production side of the industry, she commented that “the thing that I always loved was working with writers and working with story,” a passion clear in her work in the Lucky Exports Pitch Program.

In the program, she and Robbie picked six emerging women screenwriters “who worked their asses off” for a month, developing pitches for full movies and television projects. The fact that all six projects sold is a testament not only to Hodson’s skill and capabilities, but her commitment to amplifying previously unheard voices in the film industry.

When asked for advice to young female writers, Hodson had only one word: “WRITE.” In response to this answer, the chat exploded for the first time in the discussion, with viewers enthusiastically affirming Hodsons advice. “It can be tough and you can feel outnumbered,” she says, “but roll up your sleeves […] you should just keep writing what you want to write.”

As is the case with every installment of the Script to Screen series, Ryan ended the Q&A by asking what one movie his students should watch to study screenwriting. Hodson pointed to “Birds of Prey”’s two strongest influences: “Trainspotting”and “True Romance,” which she considers “among the best-written screenplays ever,” as well “Butch Cassidy and the Sundance Kid.” As she says, “if you guys haven’t read that, you’re nuts … William Goldman knows what he’s fucking doing.”

Hodson concluded her illuminating and enthusiastic discussion by expressing her desire to visit Pollock Theater once communities are allowed to gather again, saying, “[I] hope I get to see you in real life at some point soon.”