Proposition 16, the latest attempt in over two decades of efforts to bring affirmative action back to California, failed to pass in last week’s general election, upholding that race cannot be used in admissions or employment decisions in public institutions across the state, including the University of California. 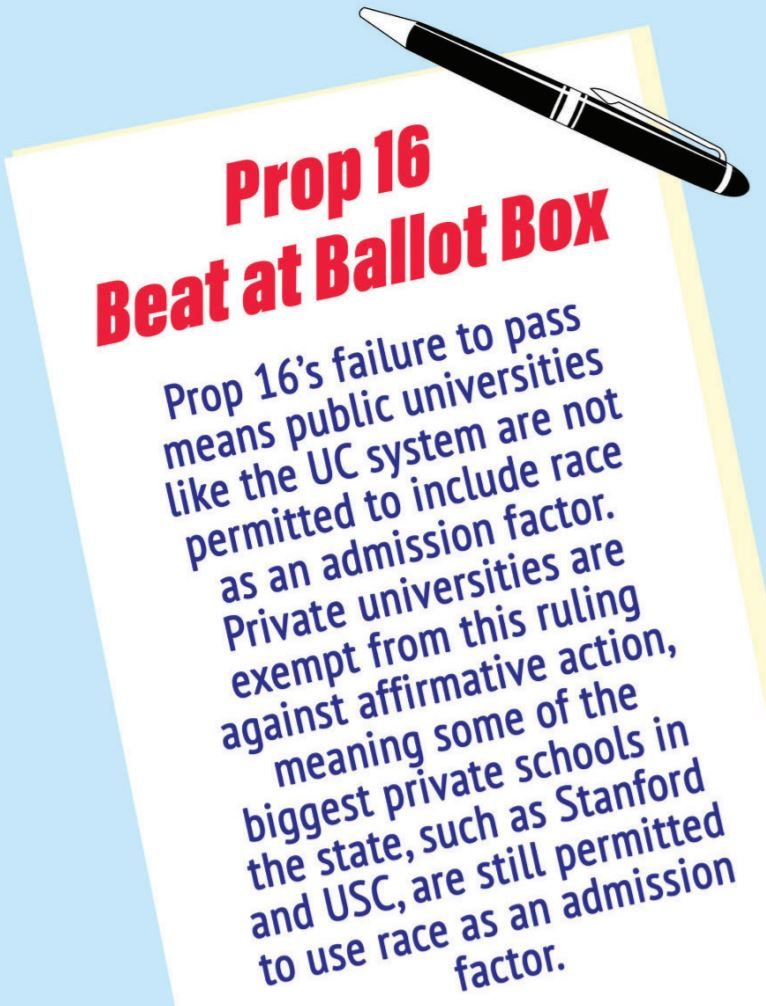 When the legislature passed ACA 5 in June 2020, Proposition 16 was officially put on the November ballot — only for the initiative to once again die, this time in the voters’ hands. Mia Griff / Daily Nexus

Affirmative action was first banned in California in 1996 under Proposition 209. The vote to repeal the ban on the most recent ballot gained large support from the UC system and its students, but ultimately, the vote failed in the California general election, with 56.7% of voters voting “no” on repealing the affirmative action ban and 43.3% in favor of the repeal. The proposition needed more than 50% of the vote to pass.

For student leaders on the “front lines” of campaigning, the decision came as a blow for those hoping to bring greater racial diversity to the UC system, according to Aidan Arasasingham, president of the UC Student Association (UCSA). He said that Proposition 16 was UCSA’s “number one electoral priority” this fall.

“The history of affirmative action in California is really a history of student organizing. Students have been on the frontlines of battles for affirmative action since the civil rights movements in the 1960s and 25 years ago in the battle against Proposition 209,” Arasasingham said. “And I know us as student leaders really feel like we stand on the shoulders of those giants who came before us.”

“This fight began before we came to campus, and unfortunately, with the failure of Proposition 16, this fight will continue long after we leave campus,” he continued.

Affirmative action previously allowed for the usage of racial quotas in public employment and education, but in 1978, the United States Supreme Court mandated a more indirect consideration of race in its decision in the case Regents of the University of California v. Bakke.

Nearly two decades later, 54% of registered Californians voted to ban affirmative action altogether with Proposition 209 in 1996. At the time, the UC supported the ban.

Over the years, there have been multiple attempts to repeal Proposition 209 and bring affirmative action back to California, all of which died in the California State Legislature — until this year.

Assembly Constitutional Amendment No. 5 (ACA 5) was introduced to the legislature in January 2019. When the legislature passed ACA 5 in June 2020, Proposition 16 was officially put on the November ballot — only for the initiative to once again die, this time in the voters’ hands.

Arasasingham attributed Proposition 16’s failure to the “tough election cycle, one that preyed on divisions and misinformation at the national level,” which trickled down to California’s ballot measures.

“Polling showed the more people knew about it, the more likely they were to vote ‘yes’ on Prop 16,” he said. “In this environment, where attention spans were limited, misinformation on the part of ‘No on 16’ was able to spread so pervasively. People were more confused about Prop 16, and in that environment of confusion, they were more likely to vote ‘no.’”

“The failure of Proposition 16 means barriers will remain in place to the detriment of many students, families and California at large. We will not accept inequality on our campuses and will continue addressing the inescapable effects of racial and gender inequity,” UC Regents Chair John A. Pérez said in the statement.

The ban on affirmative action in California has directly impacted admissions diversity in the UC system over the past 25 years, according to a report by the UC which showed that the ban caused a decline in systemwide underrepresented group enrollment by at least 12% — and up to 14% — from 1998 to 2000.

Part of this decline could have arisen from the elimination of race from financial aid and other UC decisions when Proposition 209 was implemented in fall 1998, the report said.

At UC Berkeley and UC Los Angeles, underrepresented group (URG) enrollment fell by “more than 60 percent” immediately after the proposition was passed. During this time, there was also a substantial increase in higher-income UC student enrollment.

“Prop 209 also discouraged many highly-qualified URG students from applying to any UC campuses, likely because those students believed that they would be unlikely to earn admission to their preferred campus after the end of [affirmative action],” the report suggested.

To counteract this decline, the UC implemented an Eligibility in the Local Context (ELC) policy in 2001 which guaranteed admission to California students who had high school GPAs in the top 4% of their class. From 2001 to 2011, URG enrollment increased by about 4%.

More recently, changes in campus-specific admissions policies — including holistic admissions review policies that place less emphasis on grades than in prior years — since 2012 appear to have largely nullified ELC’s impact on underrepresented groups’ enrollment in the UC, despite the extension of the program to students in the top 9% of their classes, according to the report.

Campuses turned their focus to a holistic admissions approach to increase admission for underrepresented groups, since contextualizing applicants’ strengths and challenges allowed universities to “change the ethnic composition of admitted students despite being race-blind,” the report said.

UCOP remarked in its Nov. 4 statement that while this comprehensive review method “seeks to fully understand and evaluate each applicant through multiple dimensions … excluding race and gender from that consideration continues to be a tall barrier to women and students from underrepresented groups.”

Six UC campuses — including UC Santa Barbara — now utilize a holistic approach to admissions. From 2011-12, when just four of the then-six UCs transitioned to this admissions process, underrepresented groups’ enrollment rose from 4% to 9%, the report stated.

The report concluded that even with the measures that the UC has taken since the repeal of affirmative action, applicants have suffered.

“We saw that backsliding; we saw that decline immediately after Prop 209 passed in the ‘90s, and we’ve seen it continue over the past 25 years,” Arasasingham said. “Until we repeal Prop 209, that decline is going to only continue.”

“It’s disappointing that our hands are still tied in fixing a problem that we see right in front of us,” he continued.

Alia Reynolds, the UCSB External Vice President for Statewide Affairs, said she and her office worked with other campus organizations for months ahead of the election to educate students on Proposition 16 and affirmative action.

Even with the proposition’s failure, Reynolds said that there was major success in educating students about affirmative action and that all the credit goes to the Opportunity for All Coalition and “Black and brown students that were the forefront of this movement.”

“We’ve seen from this election that there are just such large swaths of voters that are not ready for these policy changes. Essentially, their minds need to be changed, and that’s going to take a lot of work. We have a lot more work to do, even in California, a seemingly progressive state,” she said.

While affirmative action is still banned, Arasasingham said that the UC still has other options to help bring more students from marginalized communities into the UC system without considering race.

He pointed to the Student Academic Preparation and Educational Partnerships (SAPEP) from UCOP, a group of programs that build partnerships with K-12 schools, community-based organizations and businesses to help students from underserved backgrounds prepare for college. SAPEP includes programs such as the Early Academic Outreach Program (EAOP), Mathematics, Engineering, Science Achievement (MESA) and transfer student preparation and support, among others.

“These programs have been the backbone of what we’ve been able to do in absence of affirmative action, but ever since the 2008 recession, they’ve been continually underfunded, Arasasingham said.

“If we’re going to really focus on increasing diversity and representation … we’ve got to put our money where our mouth is and truly invest in these programs,” he continued.

He added that UCSA is in the process of proposing and advocating for broader admissions reforms in the wake of the Varsity Blues scandal and a UC Audit that found over 64 cases in which wealth and privilege factored into UC student admissions.

“The failure of this one proposition in this one election cycle is not going to diminish that intergenerational movement; it’s going to only continue and it’s only going to grow in the years ahead,” Arasasingham said. “I know that one day we will repeal Prop 209.”

A version of this article appeared on p. 6 of the Nov. 12 print edition of the Daily Nexus.

Happy to have played a part in voting down this racist proposition. Looking forward to seeing the Supreme Court strike down race-based affirmative action nationwide sometime in the coming years.

PERIODT. I do not want my skin color to define who I am. I rather overachieve and break barriers to show how important my hard work was in breaking down these existing barriers.

Amen to that Neslihan! I would hate to be hired because I fit a certain quota dictated by special interests groups. I long for the day where it is encouraged to excel at what you do instead of relying on some uncontrollable factor to get you in.

Agreed, I can’t imagine the mental gymnastics it takes to think this isn’t a terrible, racist idea

Legislation like this is demeaning to those who truly earn their spot. Nobody can say “you only made it because you’re _____ skin color” with race-blind admissions.

Also it disproportionately negatively affects Asians and whites. I’m well aware most of y’all don’t care about that, but imagine the color of your skin being the sole reason you didn’t make it. That’s wrong no matter how you cut it.

Prop 209’s language comes straight from the Civil Rights Act of 1964. It’s astounding that folks want to vote to repeal it in the name of equality when it explicitly tries to protect equality.

“Affirmative” action produces no new wealth. For every benefit that is conferred an equal and opposite injury is inflicted on somebody who did nothing to deserve it. Is there any wonder that the classes of people who stood to be unfairly injured fights back? The arrogant university administration is opposed to the colorblind mandate and will lie to circumvent it. “Holistic review” is a preference with a wink and a nod. Wemust force the UC administration to accept that to keep a better qualified applicant out to let a less qualified candidate in because they want more of the less… Read more »

You know what we should just do? Pass a proposition in CA to elimination international admission to competitive UC undergrad schools. They averagely take up about 12 percent of undergrad spot across tier one and tier 2 UC campus and it could be used to give it to Californians. The current international student should be allow to finish of course but something as valuable as the UC admission opportunity should be focused on California student.

I understand your point but state universities are built for the benefit of the people of the state. International students who are extremely talented can go to private universities.

Come on SCOTUS, California has defeated this kind of racism and it is up to you to defeat it across the union.