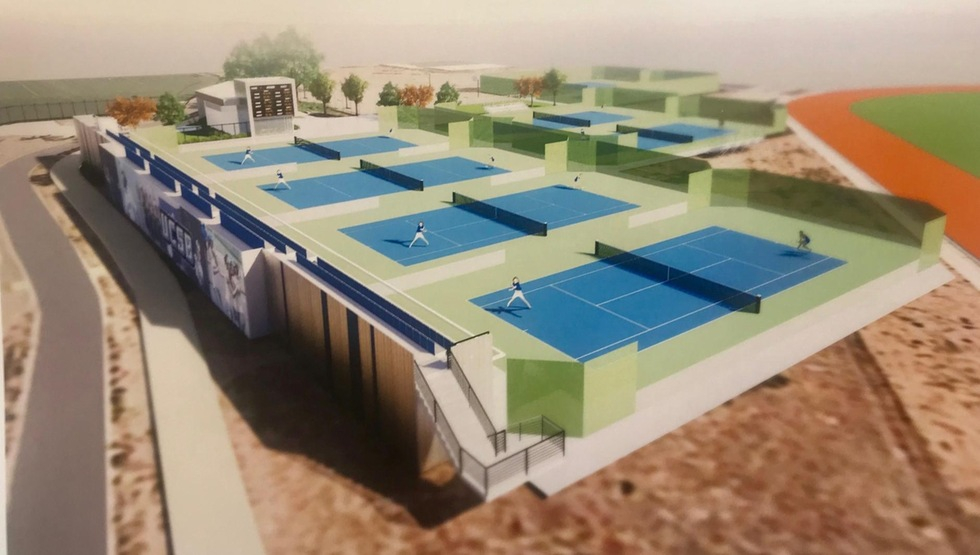 If the consistent Big West domination or the nationally ranked recruits didn’t sell you on the legitimacy of the UC Santa Barbara tennis program, then perhaps the prospect of six new courts, two refurbished courts, seating for almost 300 fans and a 1,860 square-foot team building with men’s and women’s locker rooms, storage and a lounge will.

As of two weeks ago — due to one of the largest donations ever made to UCSB athletics by John Arnhold ’75 and his family — construction of the new $5.25-million Arnhold Tennis Center is underway. Though it won’t be ready in time for the 2021 season, the project is set to be completed in eight months. The facility will replace the old Robertson Gym courts.

Arnhold is a trustee with the UC Santa Barbara Foundation, a long-time tennis enthusiast and former chairmen of the board of governors for the International Tennis Hall of Fame.

Over the past few years, Arnhold has spent a particularly large amount of time with UCSB women’s tennis Head Coach Simon Thibodeau and his team, serving as a volunteer assistant coach as Thibodeau wanted to keep him (and his strategic advice) on the sidelines during matches.

According to UCSB men’s tennis Head Coach Marty Davis and Thibodeau, when travelling with the teams, Arnhold was struck by the disparity between UCSB’s and other top tennis schools’ facilities despite being comparably competitive programs. Soon after, he committed to funding the new stadium — and by extension, to leveling the playing field for UCSB recruiting.

Davis and Thibodeau consider the new tennis center to be a monumental step toward bringing well-deserved recognition to the program.

“Men’s and women’s tennis are two of the more successful programs at UCSB and capable of competing like the baseball team [and] on a national level like the soccer team. [The new stadium] just has to elevate the visibility of the program, it just has to,” Davis said.

Davis said the future facility will be “a real, first-class, Division I tennis facility” — one that he hopes will attract both fans and top recruits.

“If you can bring a recruit on campus and watch a match at this facility with 300 fans there, that’s going to make a favorable impression, I guarantee,” Davis asserted.

“[The stadium] has been something that’s been missing to this program, to top everything there [that is already] at UCSB: the academics, the location, the scholarships now. It’s just a very desirable place to study and be an athlete,” Thibodeau added.

Over the years, Arnhold has been a critical piece to UCSB tennis’s puzzle in the recruiting arena, both coaches said. As tends to happen in Division I recruiting, UCSB was losing key prospects to other top tennis universities whose top-tier facilities and enticing scholarships were difficult to resist. Davis and Thibodeau said Arnhold helped fund tennis scholarships for the players.

Although it won’t be on the new courts or in the fancy locker rooms, the men’s and women’s teams are set to begin their season in January 2021 — each with competitive but mostly local schedules due to COVID-19.

A version of this article appeared on page 7 of the November 12, 2020 print edition of the Daily Nexus.

Exactly what we should be wasting 5.5 million dollars on during a pandemic.