A howling werewolf, a warlock summoning guests, a punny vampire and an ASL interpreter — these were the hosts of Halloween at Home: Virtually Lucid in Isla Vista, the Isla Vista Community Services District’s first-ever online Halloween celebration on Oct. 30 that encouraged residents to celebrate safely from home. 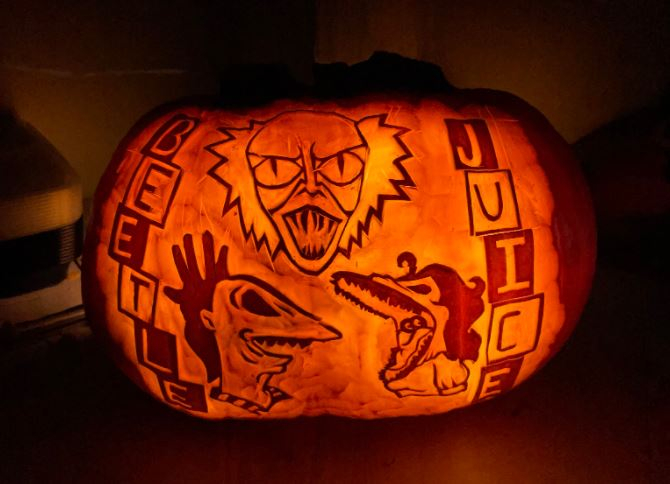 The winner of the $100 grand prize was awarded to Yesenia Hernandez, a fourth-year sociology major at UCSB, for her realistically etched “Beetlejuice” pumpkin. Courtesy of Yesenia Hernandez

I.V. CSD and Lucidity’s collaboration began in preparation for Deltopia, but since COVID-19 forced events online and their proposed Deltopia festival was postponed to 2021, they wanted to facilitate an event that prioritized community safety and kept residents at home, according to Jonathan Abboud, I.V. CSD general manager.

From 7 p.m. to 1 a.m., musicians performed on Zoom while attendees competed for $1500 worth of cash prizes. Abboud said the idea for the showcase was to offer “a free, fun and safe event that generated a good time for the community as they party at home.”

The I.V. CSD spent around $18,000 on the festival, according to Abboud. Though the event was covered by their special projects’ fund, the board reallocated a portion of the community policing fund for the event.

The board justified the allocation as their “own way of keeping people safe” at home as “an alternative to over-policing,” Abboud said. At the beginning of the virtual event, the host explained that the I.V. CSD wanted to use “financial incentives” rather than “flooding the streets with police” to deter the spread of COVID-19.

According to a press release from the Santa Barbara County Sheriff’s Office, police made two arrests on Halloween weekend — Oct. 30 to Nov. 1 —  for public intoxication and driving under the influence, in addition to issuing 20 citations.

Halloween weekend in 2019 saw similar numbers, with two arrests and 23 citations for noise and alcohol-related violations from Oct. 31 to Nov. 2.

The event had two components: a backstage party room through Zoom with an interactive chat, and a livestream through Twitch in which hosts introduced the event’s content, which included costume contests, pumpkin-carving contests, an open mic, live music and community submissions.

For the optimal viewing experience, Jonah Haas, co-founder and marketing director of Lucidity, suggested having both the Twitch livestream and the Zoom party room open at the same time to allow attendees to interact with others through the chat as the livestream transpired.

The hardest part of this event, according to Haas, was learning different software that creates interactive and participatory experiences that transcend beyond just a livestream.

From Snow White and the seven dwarfs to the cast of Phineas and Ferb, viewers in the backstage Zoom room dressed in a wide range of costumes and danced to the local music as their screens went live on Twitch.

The graphics on the Twitch livestream showed the talent and different viewers on the Zoom backstage party either dancing or singing along as they were cast on a virtual movie theater screen.

Performers, including local artists such as City Sapling and ArtOfficial, as well as 3 Peas, DJ Ardalan and DJ Ghastly, performed a variety of original songs for the community with contests and prizes presented intermittently. The I.V. CSD, the I.V. Food Cooperative and former UCSB students also talked with the werewolf and warlock hosts throughout the night about building a sense of community.

Special guests chose four pumpkin finalists for the pumpkin-carving contest, but the winner of the $100 grand prize was awarded to Yesenia Hernandez, a fourth-year sociology major at UCSB, for her realistically etched “Beetlejuice” pumpkin which won her the contest with 76% of the Zoom viewers’ votes. As a senior, Hernandez said she was “really glad to participate in this festival.”

Multiple groups danced to DJ Ghastly’s set for over an hour. Seven finalists for the group costume contest were chosen, but the Mario Brothers won a narrow victory with Snow White and the seven dwarfs in second place. At the very end of the livestream, the I.V. Food Co-op announced that $50 gift cards would be awarded for second and third place group costumes.

For the individual costume contest, contestants danced to DJ Ardalan’s set for about 45 minutes before UCSB Ph.D. student Xochitl Clare claimed the $200 award for her pirate’s costume by popular vote.

In the “open mic” portion of the event, local performers including Astronot, Shiela Mae, Archaic Revival and individuals from the I.V. Trading Post showcased their varying talents from singing, rapping and dancing to quick-pickling vegetables and embroidery.

Overall, the event shaped up to be “a locally organized, fun and safe festival” that was a “long time coming for Isla Vista,” Abboud said, adding that the I.V. CSD “looks forward to providing future events for the entire community to enjoy.”