The Daily Nexus
Sign of the Times
Democrats Are Not the Progressives They Portray Themselves To Be
November 3, 2020 at 10:39 am by Kristen Wu 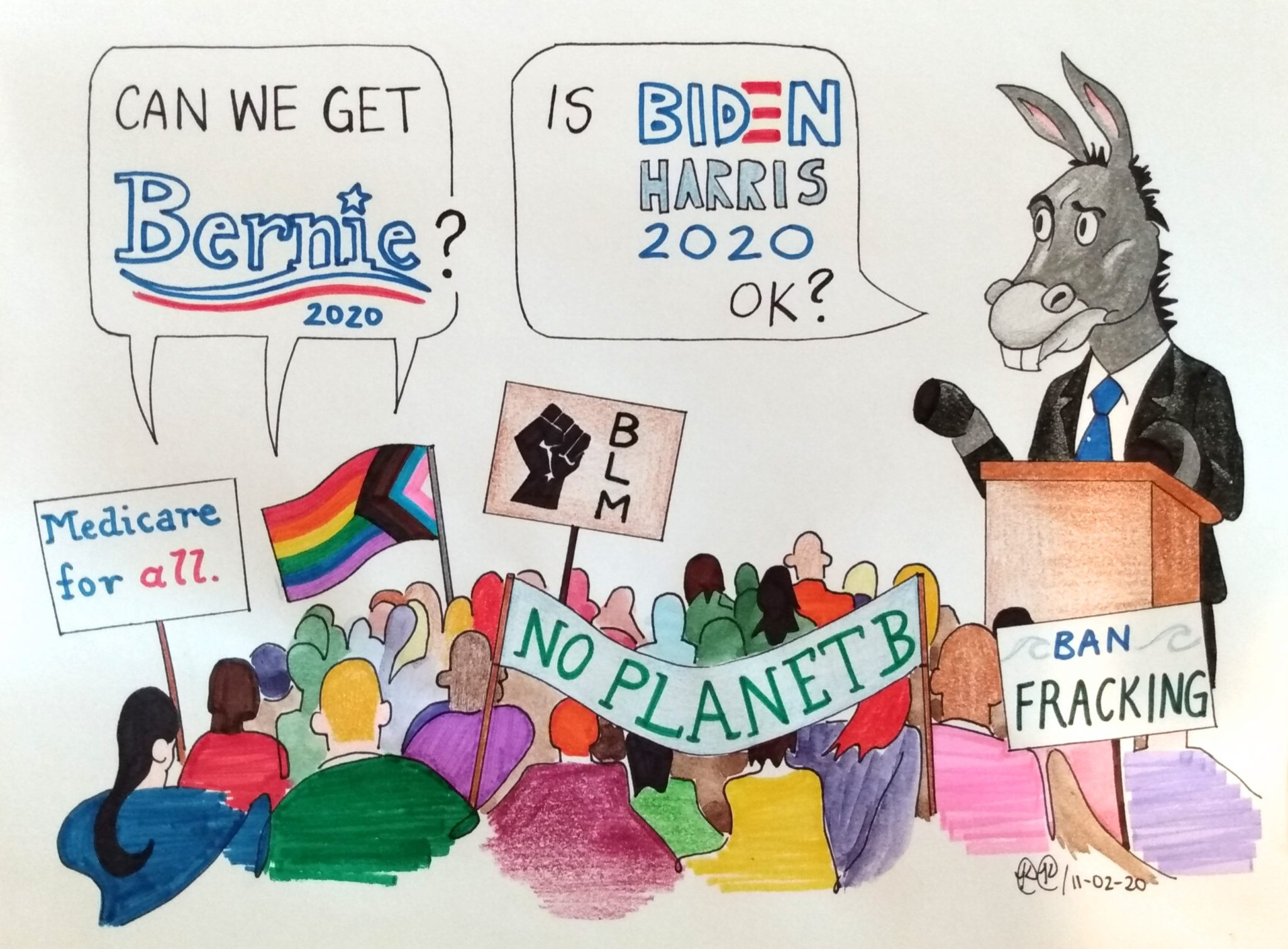 Trailing in the wake of a devastating pandemic, its subsequent economic crisis and mounting racial unrest, the road to the White House has been markedly different from its predecessors. As voters become increasingly desperate for solutions, support for progressive policies have grown, with many calling for major healthcare reform and an overhaul of the criminal justice system. Consequently, the Democratic Party has worked tirelessly to package Democratic presidential candidate Joe Biden as a reformer rather than a moderator to win over disillusioned progressive voters.

Biden has attempted to integrate progressive policies into his agenda to woo the left, taking on bold initiatives to combat everything from climate change to criminal justice reform. He’s even recruited the famously progressive former presidential candidate Bernie Sanders for help in creating a task force chock-full of progressive undertakings. While many may tout these policies as evidence of a progressive Democratic Party, they are still ways off from the reformers they proclaim themselves to be.

Occurring against the backdrop of the devastating COVID-19 pandemic, 62% of registered voters cite the coronavirus as one of the most pressing issues to them right now. While the issue of healthcare has always been a high-profile topic, the pandemic has brought it to the forefront by exposing the extensive shortcomings of the American healthcare system. Battling the coronavirus is a double whammy — with nearly half of all Americans relying on their employer to provide healthcare coverage, a job could quite literally mean life or death.

As unemployment numbers skyrocket, millions have found themselves without a job, subsequently stripping them of their health-insurance and leaving them vulnerable to the virus. The signing of the Coronavirus Aid, Relief, and Economic Security (CARES) Act by President Donald Trump did little to alleviate the burden of medical debt, failing to eliminate cost-sharing for the treatment of COVID-19. As healthcare costs increasingly prove themselves to be the source of anxiety for many Americans, Democrats have overwhelmingly expressed their support for Medicare-for-all, with a whopping 87% of Democrats in support of the policy.

However, Biden’s agenda has called for the creation of a public option that preserves privatized healthcare instead. Americans will be able to choose between private insurance or opt into a Medicare-like option funded by the government. Proponents of the policy claim that it will offer much-needed competition to private insurers, ultimately driving down costs. While it is still ambitious in its own right, it steers clear of the single-payer healthcare system supported by the majority of his base.

Democrats can’t keep relying on being the lesser of two evils — they need to offer something of substance to disillusioned voters who have time and time again been betrayed by promises of radical change.

Even though the proposal of a public option may appear progressive at first glance, it barely makes a dent in reducing the amount of uninsured Americans. To boot, a public option would fail to eliminate the influence of Big Pharma, meaning Americans would still have to pay exorbitant prices for lifesaving drugs. Because a public option does not eliminate co-pays as a single-payer plan would, pharmaceutical companies would still be able to price gouge necessary drugs like Lantus (used to treat diabetes) or albuterol (used to treat asthma). Additionally, Biden’s plan to lower Medicare eligibility age to 60 is actually less ambitious than Hillary Clinton’s proposal in 2016, which would have lowered the age of eligibility to 55.

With COVID-19 both exacerbating the health and economic disparities of African Americans, the death of George Floyd at the hands of Minnesota police served as a catalyst to widespread nationwide protests. Citizens across the country called for a thorough examination of the racism pervading the system and protested for sweeping reforms across the board. Non-black Democrats across the nation scrambled to show solidarity with the African-American community — profile pictures were changed, black screens were shared and sidewalks were hastily painted.

While a vast majority of Democrats were quick to condemn the actions of Derek Chauvin, the murderer of George Floyd, they were slower to support policies like defunding or demilitarizing the police. Instead, they proposed lackluster bills proven to be ineffective in practice and posed in kente cloth stoles on Capitol Hill. A swift dismissal of lip service and performative activism prompted them to introduce the Justice in Policing Act of 2020, a bill that would close loopholes like qualified immunity and ban chokeholds like the one that killed Eric Garner.

However, activists claim that these proposals are watered-down versions of the sweeping changes they demand. Both the proposed bill and Biden’s proposed agenda fail to address defunding the police, a policy calling for the redistribution of funds from police departments to community-based resources like mental health services and education. These are not radical notions — cities like Minneapolis have vowed to disband their police departments, and New York and Los Angeles have begun to cut funding from theirs. Although Biden’s policy does support bolstering funding for community-based resources, it disregards the root cause of the epidemic of premature Black deaths in the United States: a dangerously militarized police force. In fact, Biden hasn’t just denounced the movement to defund the police, he’s proposed siphoning more money into police departments. Like his approach to health care, the proposal is a tentative step in the progressive direction, but nowhere near the systemic overhaul that this country desperately needs.

While it is imperative that we vote out Donald Trump, a Joe Biden administration does not deliver the sweeping changes that the nation desperately needs. 56% of registered voters claim that they’re casting their ballot for Biden simply because he’s not Trump — only 19% cite the reason as his policy positions. Democrats can’t keep relying on being the lesser of two evils — they need to offer something of substance to disillusioned voters who have time and time again been betrayed by promises of radical change. Dying Americans unable to afford healthcare, Black Americans sick of waiting for equality, and unemployed Americans wondering where their next meal will come from cannot afford a moderate president. Joe Biden cannot just be the antidote to the Trump administration — he must serve as the cure for a fractured nation.

Kristen Wu is wondering why you’re reading her article instead of voting out Donald Trump.

Remember when Biden referred to POC as “beyond the pale” and said they’re gonna beat up his wife with a lead pipe to justify the 1994 Crime Bill that’s plagued underprivileged communities for decades?

And then you all voted for him because somehow you’ve convinced yourself Trump is worse than that? Worse than a man who literally propped up systemic racism on a national level?

The bill disproportionally affected POC but you are purposely misquoting he didnt say POC we beyond the pal he said that there were predators on the street who were beyond the pale. Rember when conservatives still had some morals and cared about speaking the truth. When evangelicals and the religious right actually had some credibility and conviction behind their beliefs, supported family values instead of betraying all their core values to support an amoral person who hold non of their core tenants for a few issues? Instead of voting for a man who cheated with a porn star and illegally… Read more »

Sure it wasn’t trumped who got the first step act passed. Sure it wasn’t trumped who got the lowest unemployment for POC and highest income growth. Sure isn’t trump who pull out of the TPP and NAFTA and the Paris climate agreement which made US workers both obsolete and have to force to compete with the peasants of third world country. you need to look beyond the rhetoric and see the true nature of things. Trump might not be the morally and mentally superior conservatives like Ronald Reagan but he sparked a fire and passion for economic populism and social… Read more »

By social conservatism you mean racism , xenophobia, extremist, homophobia, transphobia and divisiveness. Its not rhetoric its reality. You celebrate the removal of the US from the Paris climate accord. Trump set back the environmental protections and health of the nation for years to come. Trump may have had record lows but his ineptitude led to those being erased because of a lack of leadership. Your ignorance is showing as you talk about your fellow man as peasants of the 3rd world. I see through your rhetoric and see the worst this country has to offer. Conservatives always tried to… Read more »

Again, look closer than the rhetoric. The US reduced more Carbon emission than any other country that signed the Paris climate accord while still delivered record unemployment. Also, stop virtue signaling, you are not morally superior than conservatives just because you think you are. Many conservatives think liberals are morally inferior people for murdering or supports the murdering of innocent life(abortion). Trump is not morally superior nor did I claim he is but he is the spark for the wildfire that is economic populism. Republicans across the board except for trump all did well especially in the state legislature which… Read more »

You say record unemployment as your one point for economic populism. Hows that rate now? Which way is it headed? All because he is inept and badly botched the covid response because he does not care if people die. Conservatives are morally bankrupt supporting Trump and blatantly racist, homophobic and divisive policies. But saying everytime look at the stock market look at the economy. Yeah we are trying to take away rights, suppress voters and support the most corrupt president ever but the economy. Valuing money over people, liberty and freedom. Sure you support the liberty and freedom to discriminate… Read more »

At this point you are retreating to orange man bad now and I see no point in arguing with you anymore. Liberals have been ignoring people in the middle of the country suffering record suicide rate while denouncing them for their “privilege”. The truth is this country’s resource has been heavily skewed towards the city during the Bush as well as Obama years and if you live in the city you are more privileged than the rural folks, no matter what race you are. No wonder you see people in rural areas voting for a populist like trump. He is… Read more »

You have no retort to why you can stand to back many many harmful politics in the name of the economy. You make grand statements about not being divided but Trump has led to a more divided and divisive Than any time in recent history. You have no proof you just paint trump as the second coming but he was awful and set us back on a global and a domestic scale. PLease explain how you can support a man with racist, homophobic, transphobic, a moral policies who calls pows cowards and insults the military and point to well the… Read more »