Proposition 21 — a rent control initiative on this year’s California ballot — has supporters arguing that it could stabilize California’s expensive housing market, and detractors claiming that it could stifle housing development. In Isla Vista, some believe it could potentially be the difference between keeping Isla Vistans housed or forced out. 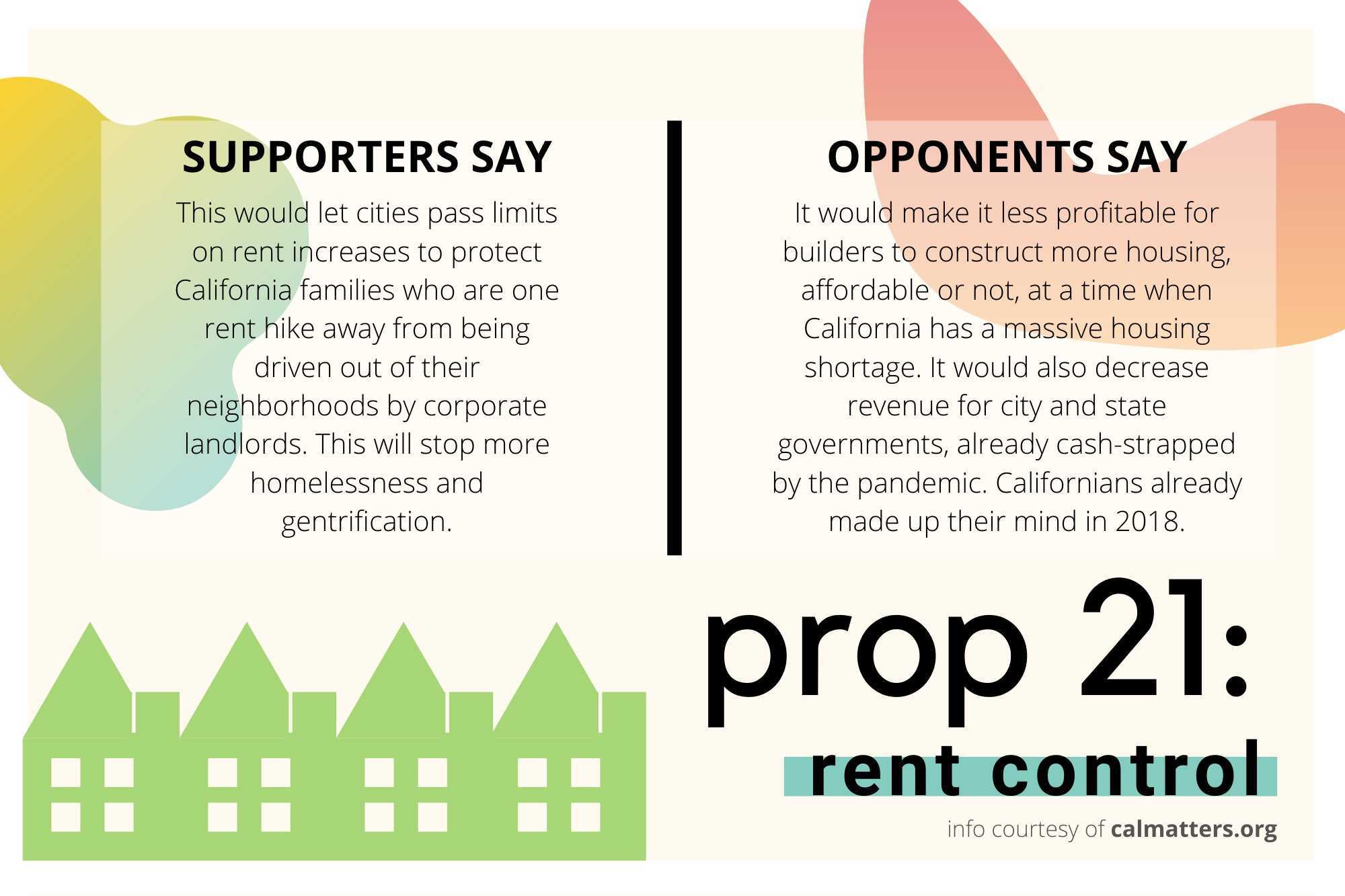 The proposition, if voted into law, would change the rules around how local governments enact rent control by attempting to stabilize how much landlords are allowed to increase rental prices. If it passes, Proposition 21 would replace 1995’s Costa Hawkins Rental Housing Act, which bars rent control on housing first occupied after 1995 and on titled units such as single-family homes.

The proposition would not allow rent control on buildings which received their “residential certificate of occupancy,” a document certifying that a building is up to code, in the last 15 years. This means that buildings 15 years old and younger cannot be rent controlled. However, the majority of housing stock in Isla Vista is older than that, according to Jonathan Abboud, the Isla Vista Community Services District’s (I.V. CSD) general manager.

Speaking in a personal capacity, Abboud noted that about 3,000 of the roughly 28,000 people living in I.V. are low-income families who, unlike students, tend to live in one place for extended periods of time. As a result, landlords leverage I.V.’s high rental turnover by attempting to increase yearly rent prices to drive out low-income residents and replace them with students, who tend to be more affluent, he said.

“Rent control keeps the prices stable, because jacking up prices is one way that landlords can get families to move out,” Abboud said.

The I.V. CSD does not have the power to enact rent control if the bill passes. Instead, since I.V. is an unincorporated area, the Santa Barbara County Board of Supervisors would vote on implementing rent control, according to Spencer Brandt, board president of the I.V. CSD.

“Should it pass, as is the practice for many [sic] statewide ballot initiatives, we would analyze the effects of the regulations for the unincorporated areas of the County, including I.V.,” Gina Fischer, a representative from the 3rd District office, said in an email to the Nexus.

The proposition would also allow landlords to increase the price of rent for future tenants up to 15% for three years after the previous tenant moves out.

If Proposition 21 passes, local property management company Wolfe & Associates said it would focus on administrative measures to ensure that it complies with the potential rent control rules, Ron Wolfe, the company’s president, said in an interview with the Nexus.

Wolfe said that the 15% cap on how much they can increase the rent if a tenant moves out — and I.V.’s majority student population tends to move often — is higher than they have ever charged and that he does not expect the measure, if passed, to dramatically affect his business.

Brandt supports the proposition because he believes it could stabilize the housing market and help long-term Isla Vistans stay in their homes, rather than being forced to move elsewhere.

“I think that this really is one of the most preeminent social justice issues of our time because as this process continues, it is the poor, predominantly people of color, who are slowly being pushed out of our community because they cannot afford to rent the unit,” Brandt said.

Most economists are opposed to rent control because it restricts prices despite market demand. Andrew Plantinga, a UCSB economics professor, argues that rent control discourages market incentives to increase the housing supply, leading to inflated prices.

“Landlords are discouraged from building as well as maintaining their current properties, which worsens the problem Proposition 21 might attempt to solve,” Plantinga said.

In addressing the California housing crisis, Plantinga said he believes that there are more reliable solutions than caping rent prices.

“The basic problem is that people in California don’t have enough income when prices go up. Targeted groups might benefit better from subsidized housing, which wouldn’t affect the market and landlords as a whole,” Plantinga said.

Governor Gavin Newsom has publicly opposed Prop 21 despite his expansion of rent control through Assembly Bill 1482, splitting from the California Democratic Party and many other progressive groups.

Assembly Bill 1482 imposes a rent increase cap, which is a form of rent stabilization. Landlords can still hike prices but not above the 5% plus inflation threshold authorized by Newsom’s signature.

Proposition 21’s likelihood of passing is dubious — only 37% of voters in a poll conducted by UC Berkeley researchers said they would vote yes on it. In 2018, 59% of voters rejected Proposition 10, a rent control initiative which would have allowed local governments to adopt rent control on any type of rental housing.

Regardless of whether or not the proposition passes, Brandt stressed the importance of voting and urged students to vote as soon as they could.

“This is our home. And there is so much at stake up and down the ballot,” Brandt said.

“If you have not already voted, go on over to your polling place, either the [I.V.] Community Center or the Santa Catalina dorms and cast the ballot. If you are not registered to vote, it’s not too late. You can still do same-day voter registration. Be part of democracy and this historic election,” he said.

Wah wah wah. Abboud offers perspective on others, and you offer perspective in exactly the same way on Abboud. Peas in a pod. Go have a good whine and cry with your blanky.

they are paying his salary

When my income was low as a student, I could not afford IV. Those families should move to more affordable areas.