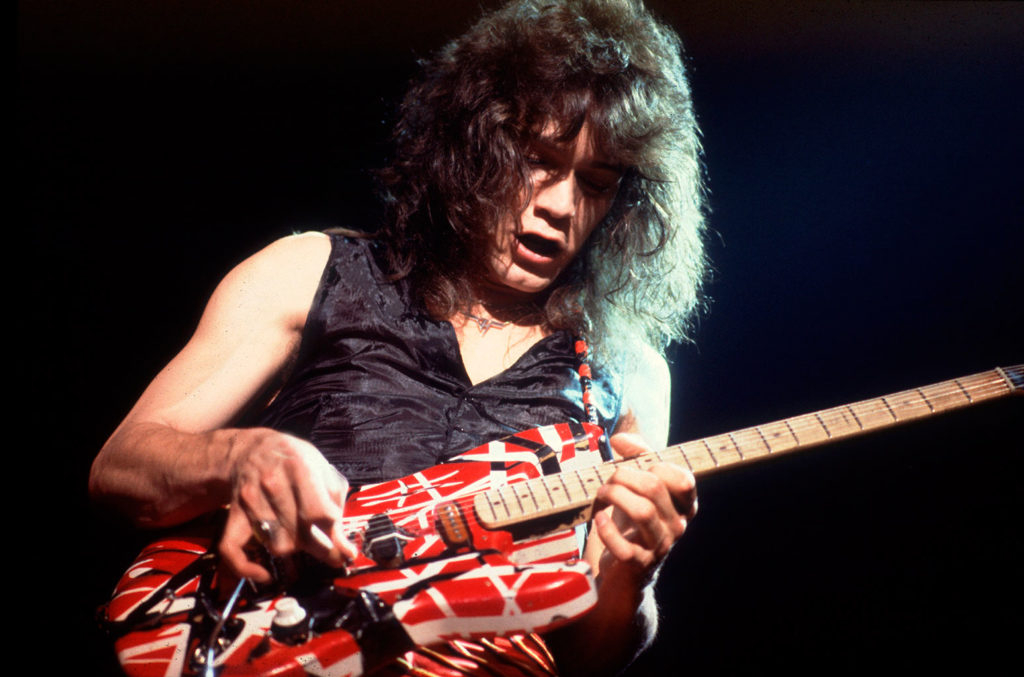 On Oct. 6, 2020, the world lost one of its greatest musical talents. Eddie Van Halen was not only one of the most innovative and unique guitarists of all time, but a musical inventor and a pioneer in guitar construction and technology. Along with his brother Alex, Eddie rose to fame as one of the eponymous brothers of the band Van Halen. Led by a banshee vocalist in David Lee Roth and a steady rhythm man in Michael Anthony, the four topped rock charts and culturally dominated the ‘80s as the Led Zeppelin of their generation. Throughout internal struggles and a revolving cast of lead singers in Van Halen, the one constant was Eddie’s electric wizardry.

Eddie’s signature invention is a technique known as tapping, used to turn out rapid-fire shrill arpeggios off of an electric guitar. Traditionally, a guitarist would keep their right hand on the body of the guitar to pick the strings, while their left hand presses down on the string to sound the notes. To tap, Eddie moved his right hand to the fretboard, the lengthier neck of the guitar that consists of metal frets separating notes, pushing down on the strings to sound the notes his left hand pressed. The novel technique shocked the world around the 57-second mark on the track “Eruption,” off of their debut album, “Van Halen I.” Two minutes of histrionics created a sea of imitators and fanatics as Eddie had transformed into the guitar symbol of ‘80s pop culture — Marty McFly’s iconic guitar solo in “Back to the Future” is a spitting image of a Van Halen solo, tapping and all.

Aside from tapping, Eddie popularized a handful of other playing techniques, including hovering his finger over the frets of the instrument to produce wailing harmonics. Such techniques enabled a tenderness rarely found in hard rock, exemplified by the solo on “Dance the Night Away.” On the song “Mean Street,” Eddie approaches the guitar the way a bass player would, slapping the instrument to produce a raucous and almost computerized opening that sounded like Daft Punk’s “Tron” soundtrack arriving 30 years early.

Eddie also influenced the way guitars were built. Upon the arrival of Van Halen in 1978, Eddie appeared on the scene with a guitar unlike any other. The geometrically striped white and black guitar that appeared on the cover of their debut album was a personalized combination of two of his favorite guitars, the Gibson Les Paul and the Fender Stratocaster. His unique invention, colloquialized to be “The Frankenstrat,” led many guitar companies to borrow his design and even sponsor him later in his career. Eddie eventually created his own EVH Brand guitar company that still thrives in his legacy.

Though he had become one of the greats of guitar, Eddie’s creativity refused to let him stagnate. He had grown up playing piano and, braving the skepticism of his fellow bandmates, sought to incorporate sounds of a synthesizer into their music. The result was “1984,” an upbeat blueprint of ‘80s rock that was eventually certified Diamond by the RIAA. Hits such as “Jump” and “I’ll Wait” explored Eddie’s synthesizer vision, while “Hot for Teacher” continued in the band’s creative hard-rock direction with its signature motorcycle-drum intro.

Every rock band in the ‘80s needed an Eddie Van Halen-esque solo to complete their sound. The music of Bon Jovi and Guns N’ Roses is drenched with Van Halen’s influence. Most notably, Eddie delivered the solo for Michael Jackson’s “Beat It,” with his signature harmonics and dramatic shredding heightening the tension of the song. While guitar has faded out as the instrument of choice, there are still some people carrying on Eddie’s influence. John Mayer, the most notable modern-era guitarist, recently expressed the inspirational influence that Eddie’s playing had on him as a kid. While it is not immediately discernible in his playing, Mayer’s unique creative flair and desire to sound outside the box is reminiscent of Eddie’s spirit.

There is no doubt that any guitarist after 1978 has been influenced by Eddie, whether directly or as “your favorite guitarist’s favorite guitarist.” The music of the ‘80s is saturated with Van Halen imitators, but no one could match the unique swing and creativity that came from Eddie. While other guitarists may have been more technically proficient, Eddie’s playing wasn’t wrapped up in obscure and complex instrumentals; Van Halen played pop songs that became uniquely rock once Eddie started up his solos. This is what makes the group so transcendent — they weren’t just an ‘80s rock band, but a band with their own innovative sound that has stood the test of time. Once quoted as saying, “If I can help a kid discover a liking, or even a passion for music in their life, then that’s a wonderful thing,” Eddie should rest easy knowing his tremendous impact as one of the greatest guitarists and most inspirational cultural pillars of all time.