Efforts to abolish child marriage around the world are obstructed by common public misconceptions with regards to the subject. To quantify these misconceptions, a team of anthropologists at UCSB — including David W. Lawson, Rachel Lynes, Addison Morris, and Susan B. Schaffnit — launched a survey to gauge public knowledge of child marriage.

Faiz Mohammed, 40, and Ghulam Haider, 11, who were betrothed to one another, in 2012. UN photo by Stephanie Sinclair/Tooyoungtowed.org

Their findings, published in PLOS One, also delve into the considerations which global health and women’s organizations must take into account because of these misconceptions.

Child marriage is defined by the UN as the wedding of two individuals where one or both participants are below the age of 18. This practice is most prevalent in sub-Saharan Africa and South Asia, where a respective 38% and 30% of girls are married before they reach 18 years of age.

Despite the clear-cut definitions, the matter is poorly understood by the general public because of incorrectly perpetuated stereotypes and assumptions. In a Twitter thread published by Lawson, he wrote, “We predicted public misconceptions would be common because the term ‘CHILD marriage’ conjures the notion of prepubescent brides & because awareness campaigns routinely utilize shocking images/extreme scenarios to capture public attention.”

Sure enough, images that pop up under the search query “child marriage” usually depicts something along the lines of a forced marriage between a preteen girl and a middle aged man.

This survey distributed by Lawson’s team consisted of 10 questions and was given to 755 people, who relied solely on their preexisting knowledge on the subject. Of the individuals who took the survey, 59% were women, 55% were college educated and 95% were born in the United States.

All participants were asked to assign themselves a number as a self-evaluation of their political views. For the range of 0 for completely liberal to 100 for completely conservative, the median of the sample was determined to be 47. 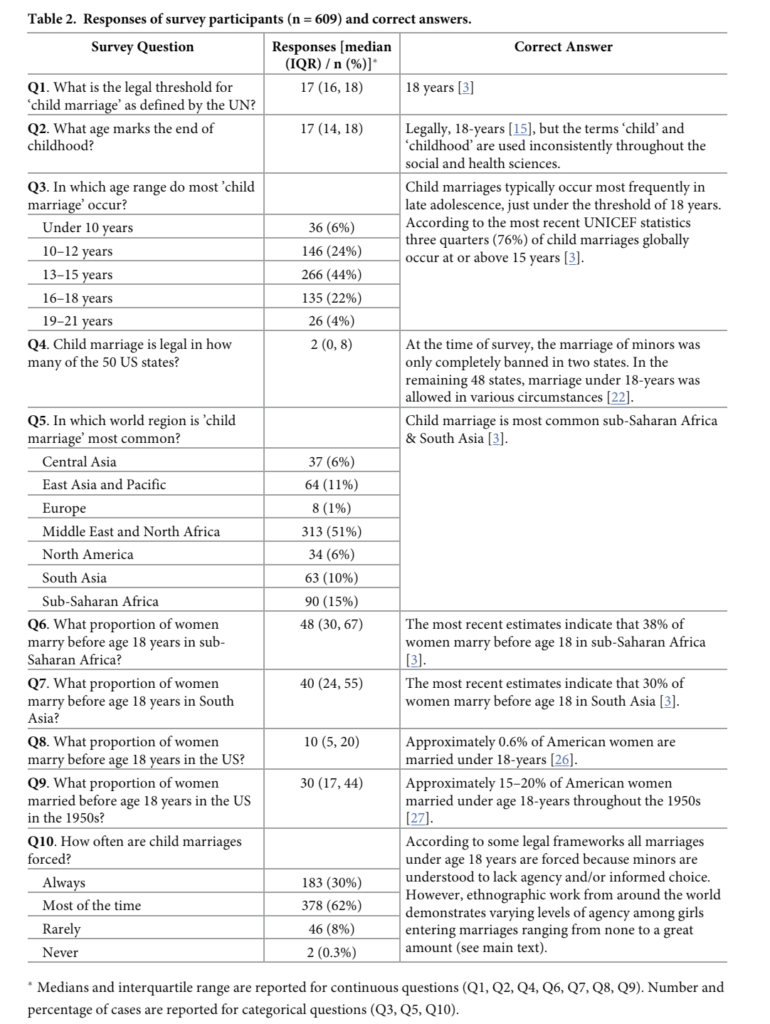 Though the misinformation distributed by the media is useful in garnering support for abolishing child marriage, it comes at the cost of raising harmful cultural stereotypes for the nations that exercise the practice, the researchers argue. Since child marriage is widely assumed to occur without the consent of the underage female, overestimating the prevalence of the practice may cause high-income countries to antagonize the cultural traditions of South Asian and African nations.

Additionally, since underage women are often perceived as passive victims of child marriage, parents and husbands are frequently described as exploitative and coercive. This inaccurately reinforces the notion that low-income nations must be morally “rescued” from their own cultural practices. According to Lawson and his collaborators, these representations can undermine humanitarian efforts to alleviate the issue as well as encourage ethnocentric judgements of poorer nations.

The survey indicated that the overwhelming majority of participants believed that child marriage is illegal throughout the United States, suggesting widespread ignorance about the fact that marriage below the age of 18 was only illegal in two states at the time of the survey.

This raises issues according to the researchers, as it reflects the hypocrisy in the American view on the subject; many high-income countries such as the United States routinely place pressure on nations that exercise child marriage to enforce stricter laws on the matter, despite the unsuccessful implementation of similar laws within the United States.

Another implication of these results is that organizations that seek to abolish child marriage in the United States, such as Unchained At Last, should act on the assumption that the vast majority of the public are oblivious to the fact that it remains legal in most states, the paper describes.

Child marriage is considered to be a “harmful cultural practice” since underage girls are legally unable to give consent. This presents an ethical obligation for intervention, which has allowed for policy attention on the issue to escalate in recent years. For example, a global partnership of over 1,000 civil society organizations called Girls Not Brides tasked itself with ending global child marriage via raising public awareness for the practice and its consequences.