The Daily Nexus
Science & Tech
Lions and Tigers and Bears, Oh My! How the “Ecology of Fear” Can Be Instrumental To Achieving Wildlife Conservation Goals
September 16, 2020 at 10:30 am by Joshua Pham

Traditionally, prey-predator dust-ups have often been thought to be settled once the predator takes the finishing bite or the prey luckily slips away. However, a more overlooked research inquiry growing in wildlife ecology contends that predation does not stop there.

Known as the “ecology of fear,” this research framework explains that the role of fear in a prey animal’s  response to risk cues associated with predators may have indirect effects on the behavioral dynamics governing the survival and reproduction of their population. 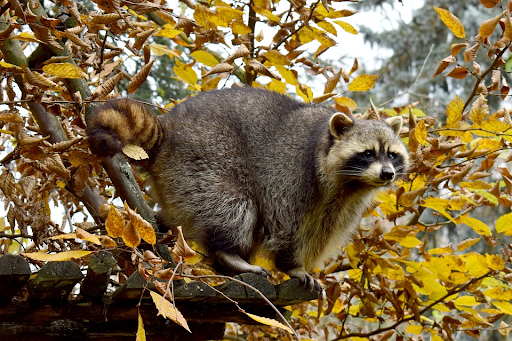 Fear, as described in this context, refers to the perception and assessment of risk by an animal. It may be followed by adaptive behaviors that prevent or minimize unfavored outcomes. One simple demonstration of this can be found in the coasts of the Gulf Islands, where a 2016 study found that the coastal raccoons spent 66% less time out in open intertidal areas foraging for food when playbacks of dogs barking — a large, carnivorous predator — were amplified through speakerphones.

In this case, the researchers inferred that the perception of risk from the playbacks deterred fearful raccoons from foraging vulnerably on their own prey. As a result of this, a significant increase in the intertidal population of one of the raccoons’ tasty meals, namely the red rock crab, was observed.

These sorts of behavioral dynamics are of particular interest to Dr. Kaitlyn Gaynor, a postdoctoral researcher in wildlife ecology at the UCSB-affiliated National Center for Ecological Analysis and Synthesis. Along with her colleagues, Gaynor discusses in a recent review article the many applications of this “ecology of fear” framework towards greater wildlife conservation strategies and practices, many of which may be related to the national parks we visit or the fresh produce we purchase.

“Research on the ecology of fear tries to understand the role that risk perception plays in driving not just animal behavior, but broader species interactions,” Gaynor said.

In other words, the fear that is wired into animals can be adapted into a tool that wildlife ecologists can utilize to indirectly shape animal behavior towards conservation goals, whether it be to increase population densities of endangered prey populations or to protect vulnerable livestock from predation through sensitization to predatory risk cues.

Fear can be both acute and chronic. Acute fear may encompass the “fight or flight” stress response that an animal faces in the immediate presence of a threatening predator.

But Gaynor also notes a sort of chronic fear that is backgrounded in the survivalist mind of a prey animal. Chronic fear can function independently of actual predation, and depending on time and location, refers to the underlying level of risk an animal assesses when entering an area they may associate with a higher probability of predation.

“That chronic risk can factor into almost every decision that an animal makes [such as] where to go, how quickly to move, what to eat, or how much time to spend looking for threats.”

“Fear therefore, even if a predator is not there, can be very important in shaping an animal’s activity, and as a result, this idea behind the ecology of fear is that fear — this kind of indivisible force on the landscape — can drive animal behavior … which can affect maybe how stressed an animal is, how likely it is to reproduce, or maybe affect population dynamics.” 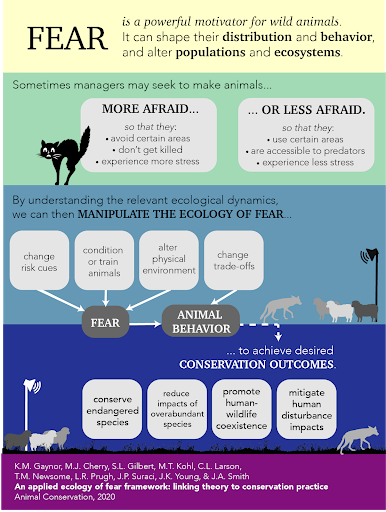 A graphical abstract summarizing how the ecology of fear can be employed in conservation goals. Courtesy of Kaitlyn Gaynor

Gaynor devises distinct “management levers” that wildlife managers can pull in order to actively trigger potential fear-based behaviors in animals. These may include manipulating an animal’s habitat structure in favor of the prey or the predator, changing sensory risk cues that a prey may learn to associate with predation, conditioning animals to be more or less afraid of certain stimuli or perhaps directly manipulating foraging opportunities for animals in different environments.

These “management levers” can be employed in strategies that further respond to prominent wildlife concerns she discusses such as the reintroduction of  naïve prey with underdeveloped fear responses to areas of higher predation risk, the management of the cascading effects of certain hunting policies, and of particular pertinence to UCSB students, the mitigation of unfavorable conflicts between wildlife and humans.

“I think that a lot of us here in Santa Barbara loves to just play outside … and I think just something to keep in mind is that there are always animals out there … [that] are afraid and staying away from you.”

“As actors ourselves … just our presence on the landscape, really, fills the role of this kind of apex predator, where people are constantly instilling fear in animals whether or not we actually pose a true threat. We’re noisy, we’re ubiquitous, we’re large,” she added.

Consider a local research study that Gaynor cited in her review paper where researchers had reported an increase in the snowy plover population at Sands Beach (adjacent to Coal Oil Point Reserve) when a physical barrier had redirected foot traffic away from the area where they roosted. The study also reported that snowy plovers’ population “distribution contracted to within the protected area.”

“Human-wildlife conflict is a really big issue … and can be a threat to conservation because sometimes people kill the animals or not support conservation of those animals, and so to keep animals out of crops or to keep them away from livestock, you can kind of instill fear [with] fear-inducing tactics,” Gaynor said.

“A scarecrow is kind of the oldest trick in the book.”

In another example, a 2018 research study cited by Gaynor found that the installation of fladry, a nylon rope onto which several strands of flags are sewn, correlated with an absence of predation by wolves on livestock housed in several pastures operating in various states of the northeastern United States. The researchers of this study stated that the waving of the flags when suspended in wind acts as a visual deterrent that stimulates fear in the wolves.

On the other hand, Gaynor recognizes that “animals may [also] be staying really far away from oil wells or hiking trails, even though there isn’t actually much of a risk to them there.”

“So in that case, maybe you can change an animal’s experience; habituate it — maybe go out repeatedly and expose the animal to people until it learns that there’s not actually a threat there,” she adds.

In the context of COVID-19, research into human-wildlife conflicts may observe shifts in focus given the absence of humans in certain areas of the world.

“By being absent from a lot of places where we typically are spending a lot of time outside, we’re kind of recalibrating the ecology of fear for a lot of animals.”

“Some scientists have called this like the ‘anthropause’ — like this moment where human activity kind of stopped around the world. And it gives us an interesting look at what the impacts of human activity are on wildlife,” Gaynor commented.

Dr. Gaynor is currently working on a research project that is trying to assess how the shutdown of national parks back in the spring had affected animal movement.

“I’m working … to see, you know, [for] animals that were typically afraid of people and stayed away — are they now coming into areas that are now kind of empty because there aren’t as many tourists?”

“Or in the other case, we have maybe prey animals that were hanging out in campgrounds because they were safer from predators. Are they now kind of leaving and going into other safer areas because people aren’t there to keep them safe?” 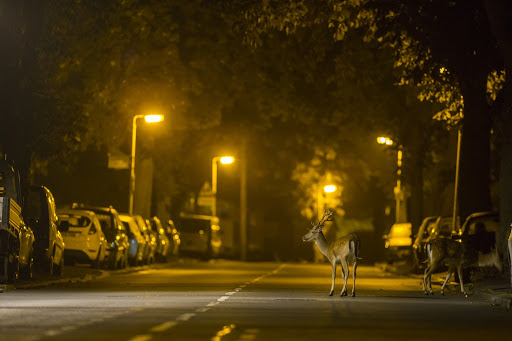 Another question that arises especially in the wake of the global pandemic is the temporal distribution of animal behavior.

“Human activity [has been] creating a more nocturnal world in which animals are kind of seeking out the cover of darkness. And so that’s kind of this idea that the ecology of fear can vary over day-night cycles and that people are making a time much scarier for animals.”

A previous 2018 meta-analysis of 76 studies by Gaynor found an average increase in nocturnality by a factor of 1.36 across the diel patterns of 62 different species of mammals in environments with relatively higher human activity. Shifts towards nocturnality were more pronounced in larger, perhaps easily visible mammals (including apex carnivores), and there were reported responses to all kinds of human presence, both lethal and non-lethal.

For an unquarantined world, these findings were evidence for the conclusion that human disturbance during the day drove fear-mediated responses in these animals to shift their activity at night.

“[But now], we’re interested to see if animals are becoming less nocturnal — are they more active during the day because we’re all stuck inside?”

“The pandemic probably helped a lot of species kind of explore new areas that they were typically afraid of because of people, but over the longer term, I think as things are reopening we might actually see an increase in human wildlife conflicts because animals may have gotten used to being in these areas where people were.”

These ecological nuances that are interwoven with reopening the natural world back to humans are what Gaynor will continue to research globally throughout and beyond the pandemic.

But for all of us, perhaps rejoining the natural world will allow us to be more aware of the fact that humans are not the only ones roaming the earth.