The Daily Nexus
Opinion
Letter From the Editor: Goodbye to All That
August 27, 2020 at 5:06 pm by Hannah Jackson 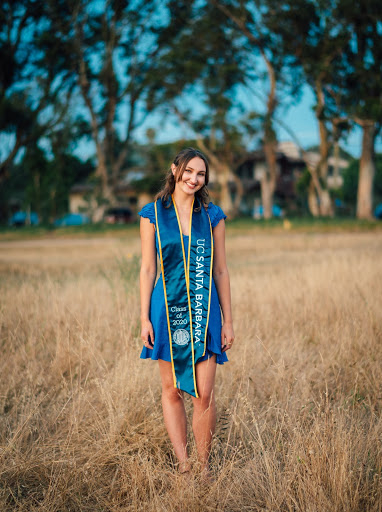 In “Goodbye to All That,” the culmination of Joan Didion’s “Slouching Towards Bethlehem,” she writes, “One of the mixed blessings of being twenty and twenty-one and even twenty-three is the conviction that nothing like this, all evidence to the contrary notwithstanding, has ever happened to anyone before.”

I’ve never been one to use the words of others to convey my own feelings, but I can’t seem to shake this quote — perhaps because it is simultaneously so precise yet so flawed. It’s easy for every moment, especially at our age, to feel so monumental and fresh, when in reality it has been experienced in some iteration more times than we can count. But now, in these — dare I say, unprecedented — times, we are just as in the dark as everybody else, with no blueprint left for us.

It’s safe to say that I never thought that college would end like this, but unmatched circumstances seem to be the norm for the class of 2020. Experiencing the 2016 election, fires, floods, mudslides, a mountain lion, a burgeoning recession and a failing democracy, among other critical moments of social upheaval — most notably the Black Lives Matter movement — has only underscored the already-ingrained resilience of this storied community.

I am eternally grateful for the Daily Nexus for encouraging me to view Isla Vista, and the world, through a lens of empathy and curiosity. The Nexus has given me a sense of stability — an assurance that, in spite of all of the chaos, the earth never stops turning. It has taught me to look for stories everywhere I go, to ask questions and to hold those in power accountable.

On my first day as editor in chief, one of my predecessors advised me that I would “fuck up every day until it’s over.” And she was right. In my eternal propensity to take everything personally, making mistake after mistake wore me down, but I am also gratified knowing that I was given a trial by fire. If we don’t learn from our failures, we cease to grow.

The Nexus is by no means perfect. The staff, like you, are students who balance school, personal lives and struggles (as well as budding journalism careers). I urge you to view the Nexus with compassion; it is so easy to view it as an entity, but remember that the people behind it are constantly evolving and learning as they go. However, this does not mean to exclude them from criticism, as that is what propels them to become better journalists and people.

Harper Lambert is the new editor in chief and Evelyn Spence is the new managing editor of the Nexus. I have the utmost faith that these women will helm the paper with the grace and strength that their roles require. They are courageous and intelligent leaders, and I look forward to cheering on all of their future successes, both at the Nexus and beyond.

I owe a massive debt of gratitude to the people who made the Nexus more than just a job (I cringe at writing something so cheesy, but please indulge me this once). Thank you to Supriya Yelimeli who hired me, and to Melanie Voskanian who first made me feel welcome in our Storke Tower dungeon. Thank you to Ariana Marmolejo, Ali Abouesh, Laurel Rinehart, Maura Fox, Jorge Mercado, Emma Demorest, Omar Hernandez, Shomik Mukherjee, Sanya Kamidi, Jose Ochoa, Will Emmons, Sarah Garrett and Zoë Jones for making my first years at the Nexus so memorable and foundational to who I am now. To Simren Verma, thank you for inspiring me to be better every day, for keeping my head on my shoulders all year and for being a tried and true friend for life.

To those staying behind, you are wonderful, talented people and I am so excited to see what the future holds for you. Remember to always remind yourself of who you serve as a journalist, and whose voices are missing from the conversation. I hope that the world can see you all through my eyes, as the intelligent and passionate individuals you are.

There is so much I will miss about college beyond the Nexus. I will miss oversharing in office hours (Professors Ellen O’Connell Whittet and Brent Strathman, in particular, I owe you both infinite thanks — and a beer or two). I will miss the tranquility of watching an unmatched Isla Vista sunset from the bluffs, rowdy trivia nights fueled by Woodstock’s pitchers and walking down the severely underrated 68 block.

To my housemates DaniRose Hill, Jessica Bixby, Kaira Wallace, Lily Day, Matthew Hancock, Sarah Bernard, Alia Ajina (and honorary housemate Amelia Armstrong), thank you for making I.V. into a home that is so difficult to leave.

You have all made it so incredibly hard to say goodbye to all that.