The Daily Nexus
UC News
Amid Backlash and Uncertainty, UC Regents Hold Heated Discussion on Future of TMT
August 25, 2020 at 12:07 am by Max Abrams

“We have been sitting here for six years with no specific game[plan] to get to the finish line,” UC Regent Richard Leib said about the Thirty Meter Telescope at the UC Board of Regents meeting on July 30. 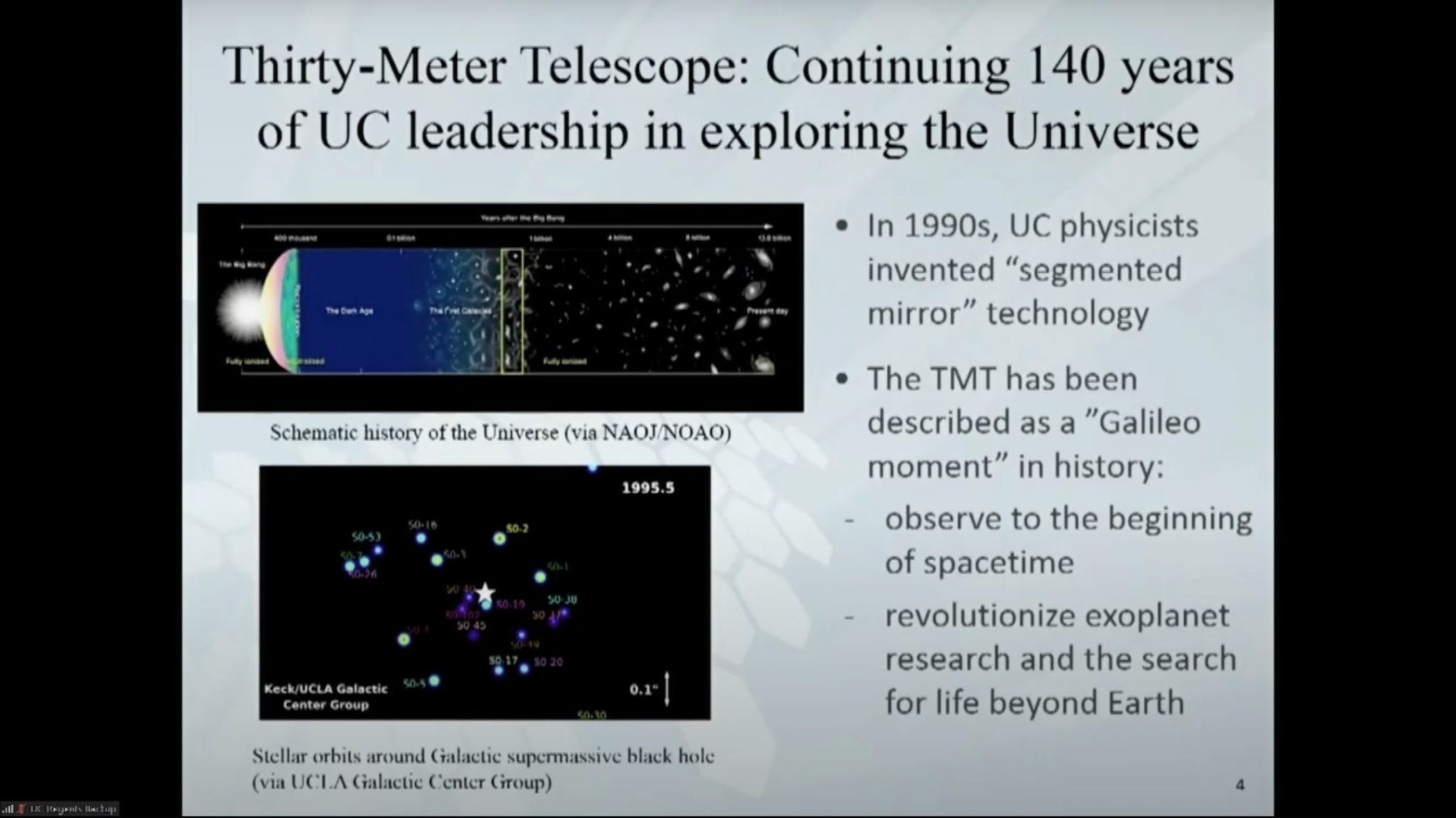 “The Thirty Meter Telescope represents our best chance at deepening our understanding of the physical realm,” Ghez said during a powerpoint presentation. Courtesy of the UC Board of Regents

Leib’s comments summed up a landmark discussion about the future of the $2.4 billion Thirty Meter Telescope (TMT) — a point of admonishment from students and activists for its construction on sacred Native Hawaiian land and a point of pride for professors and faculty members who laud its potential for groundbreaking scientific research.

For one of the first times since the UC Regents started funding the telescope in 2014, both advocates and critics of the project brought forth their perspectives to the UC Regents. Until July’s meeting, those for and against the telescope have rarely sat at the same table.

While over 10 speakers made their case during the meeting, a sense of uncertainty over the project’s completion dominated the meeting. Taking into account TMT’s rising costs and abounding delays, speakers noted that the prospect of seeing the telescope through to its completion is beginning to thin.

The UC has provided over $100 million to the project since it broke ground in 2014, according to UC San Francisco Senior Vice Chancellor Paul Jenny, and continues to fund it through a joint agreement with CalTech and the Gordon and Betty Moore Foundation (GBMF). Though the funding is on schedule, the project itself is not.

The telescope was supposed to be completed in 2020, but Native Hawaiian protestors have held off construction efforts for years by blocking Mauna Kea’s sole access road and engaging in lengthy legal battles. The latest expected completion date is 2027, according to TMT’s website.

TMT International Observatory LLC (TIO) currently pays $1 million per year for its lease on Mauna Kea to build TMT. But the current lease agreement expires in 2033, and if the telescope isn’t finished before then, there’s no guarantee the land agreement will be renewed, according to Jenny.

But despite increasing costs, opposition and delays to the telescope, Michael Bolte, a UC Santa Cruz professor and associate director for TMT, and Andrea Ghez, a UC Los Angeles professor who serves on the TMT science advisory committee, emphasized the necessity of seeing it through to its completion.

“The Thirty Meter Telescope represents our best chance at deepening our understanding of the physical realm,” Ghez said during a powerpoint presentation, adding that TMT would allow researchers to see stars and black holes with unprecedented detail.

Bolte added that TIO, which was formed in 2014 and includes the UC as one of six partners, has consulted with the Mauna Kea cultural group Kahu Kū Mauna and contributes $2 million per-year towards local Hawaiian community programs.

This includes support for local Hawaiian K-12 S.T.E.M. programs and a workforce pipeline program for community colleges in Hawaii, Bolte said. The University of Hawaii has also agreed to decommission three telescopes on Mauna Kea in exchange for the construction of TMT, and, most recently, TIO has applied for roughly a billion dollars in funding from the National Science Foundation (NSF), he added.

But if the project transitions to the Canary Islands, it is unclear whether the NSF funding would carry over, which could leave the onus on the six stakeholders to pick up the financial slack, Jenny said.

Laulani Teale, a Native Hawaiian activist who visited UC Santa Barbara in December 2019, said TIO is “committing genocide” in constructing the telescope and urged the Board to divest from the project immediately.

“The time for one culture — any culture — achieving greatness at the expense of another is over,” she said.

UC Santa Barbara Chancellor Henry T. Yang, who was not present at the December 2019 event, is closely involved with TMT as the chair of its Board of Governors and has maintained  that he won’t step down, despite numerous calls for his resignation from the project.

Kealoha Pisciotta, a Native Hawaiian activist who has been involved with Mauna Kea protection efforts since 1995, condemned the UC during her remarks for funding a project that endangers Native Hawaiian communities.

“TMT simply cannot and will not be built on Mauna Kea. We will use all peaceful means, we will use all legal means,” she said. “And if necessary, we will lay our bodies down to stop this project.”

Neal created a petition for TMT supporters but said she has received threats of violence for her advocacy and has been alienated by long-time friends and family.

Kalepa Baybayan, an astronomy advocate and Native Hawaiian mariner of 48 years, believes that Mauna Kea is a “gift” to science and should be treated as such.

“I have always maintained that the mountain was large enough if the community chooses to share the space fairly amongst all users,” he said, arguing that TIO has the legal right to proceed with the project.

Despite the harsh words from critics, the Regents were not keen on abandoning its partnership with TIO. UC Regent Charlene Zettel worried about the UC’s optics for future international endeavors should it cut all ties with the project.

Jenny said that the decision to walk away from the telescope project wouldn’t sit well with GBMF, whose $250 million pledge to the project is one of the largest in UC history.

Following Zettel’s questions, John Pérez, chair of the Board of Regents, brought the discussion to an end with a set of his own, tying off the meeting with a subtle urge for progress in the future.

“This will likely not be the last time we consider this,” he said. “And perhaps the next time it will be scheduled as an action item.”