Nearly six months after it became publicized that Chancellor Henry T. Yang is the chair of the board of governors of the Thirty Meter Telescope in Hawaii — a project known equally for its scientific ambition and disputed construction on a mountain sacred to Native Hawaiians — two campus groups invited indigenous Hawaiian activists to speak about their opposition to the project during a town hall on Tuesday evening. 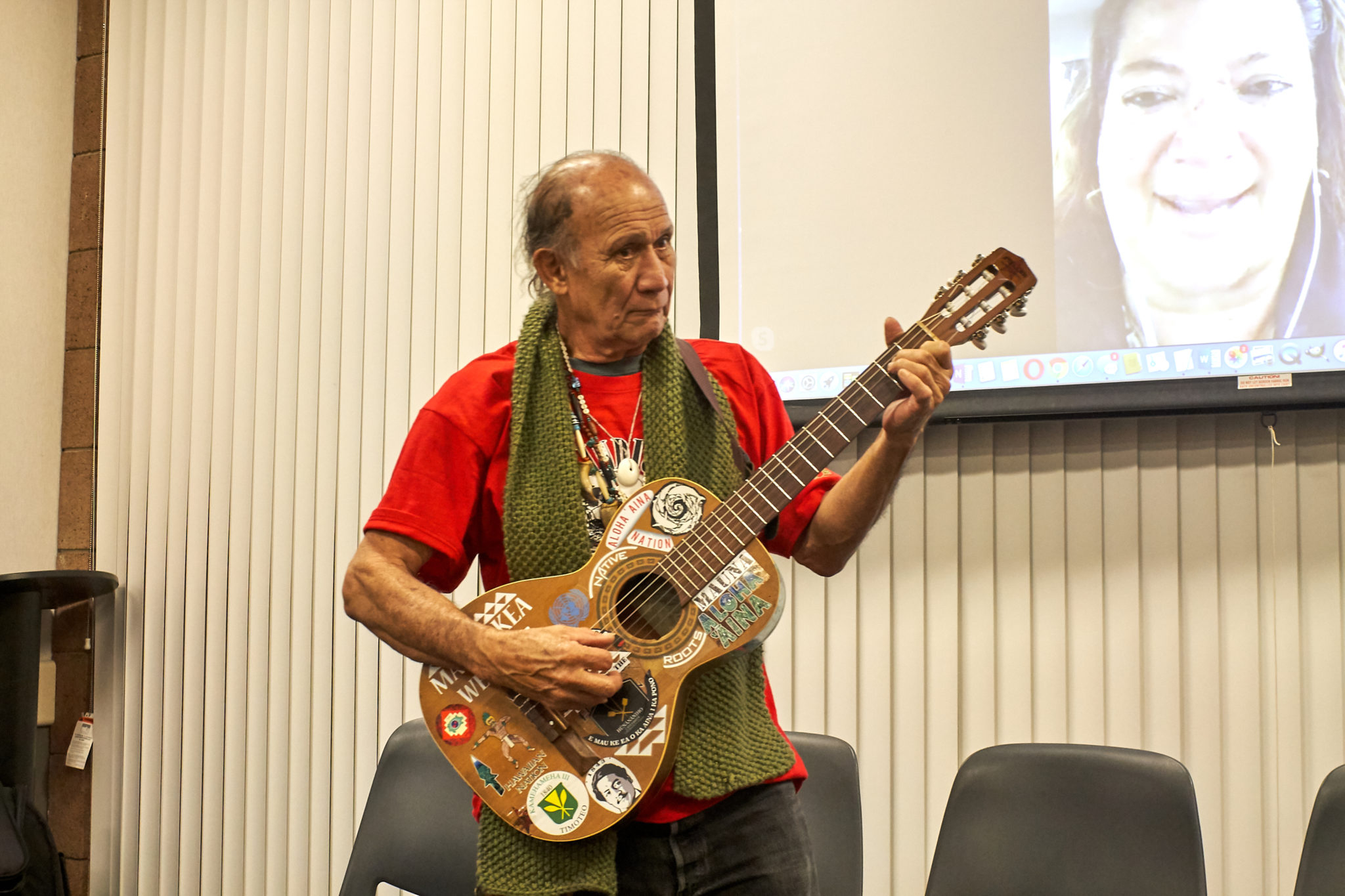 Three activists, including Liko Martin (above), spoke about their experiences in the years-long protest against the telescope. Kaiyi Yang / Daily Nexus

The panel, hosted in collaboration between the Office of the External Vice President for Statewide Affairs (EVPSA) and the American Indian Student Association (AISA), consisted of three speakers who spoke and sang to a packed Flying A Room in the University Center about their experiences on the frontlines of the years-long protest against the Thirty Meter Telescope (TMT).

“[Mauna Kea is] a burial ground of our most sacred and revered ancestors, how is that a proper place to build structures?” Kealoha Pisciotta, founder of protest group Mauna Kea Anaina Hou, said over Skype during the town hall. “It’s a place where we practice [a] ceremony that’s gone on for millennia.”

Mauna Kea’s significance resonates with many UC Santa Barbara students, some of whom took to social media to condemn Yang and the UC’s involvement with the project after it was publicized that Yang serves as the TMT’s chair of the board of governors. The backlash mainly took shape in the form of student-created petitions that circulated earlier this summer, asking Yang to step down from his role as chair.

One of the speakers, Hawaiian activist Laulani Teale, emphasized that the crux of the conflict between Native Hawaiians and TMT is a matter of consent, as the developers of TMT are operating on land where many people native to it were not given the chance to approve the project.

“Nobody’s against science,” Pisciotta said. “The science was asking us, ‘What is our alternative [to building TMT]?’ But that question doesn’t belong to us. It actually belongs [to those working on the telescope].”

“How can you build something 18 stories high, [with a] stadium-size footprint and not frustrate the endangered species and the land and the water of Mauna Kea? So the question now becomes ‘How does science innovate to find a better solution that doesn’t do that?”’ she added.

In July, dozens of Hawaiian elders were arrested for obstructing Mauna Kea’s only access road, the New York Times reported, including Liko Martin, the “Bard of Aloha ‘Aina,” who attended Tuesday’s town hall. Martin spoke, sang and played guitar to the town hall’s attendees, performing several songs in which he wrote about Hawaii’s occupation by the U.S. government and the proposed development of TMT.

Martin compared his time in the Hawaiian courthouse after he was arrested for protesting to being on an “auction block,” with a frenzy of lawyers vying to represent the elders as they entered the courthouse.

“There was 33 of us [arrested]. The night before we went in there … I got the feeling [that] tomorrow we’re going to be on the auction block,” Martin said. “That’s exactly how it came down. All these attorneys are running around like, ‘We’ll take this one!’”

“It was like throwing my fishing hook in [the courthouse]. I didn’t even have to put any bait on it,” he added.

There are currently 13 other telescopes on Mauna Kea, but none as expensive as TMT, which is estimated to cost over a billion dollars, the New York Times Reported; $300 million of the funding will be provided by the UC and Caltech, partially funded through a $200 million donation from the Gordon and Betty Moore Foundation, according to the foundation’s website.

Student fees are not used as part of TMT’s funding, according to Claire Doan, UC Office of the President spokesperson.

If completed, TMT will provide images 12 times sharper than the Hubble Space Telescope, according to a UC press release.

Construction on the telescope, however, won’t be complete until at least 2030, assuming construction begins in 2020, Teale said. The telescope also must be completed before 2033, she added. Otherwise, TMT’s lease for the land will expire, and “the people of Hawaii have been very clear that they have no intention to renew [the] lease.” 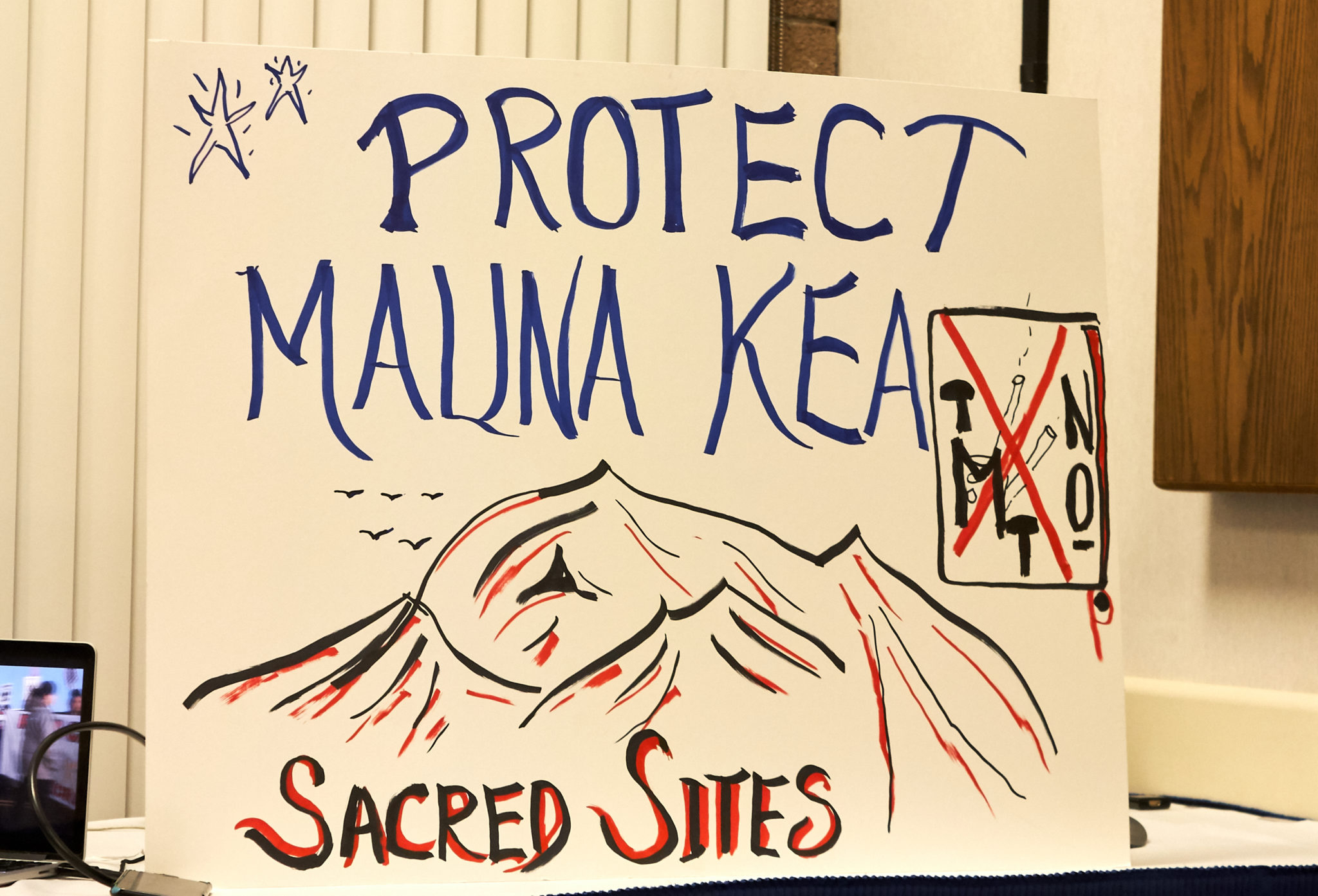 Although criticism of Yang’s involvement with TMT sparked earlier this summer, Daevionne Beasley, the Associated Students (A.S.) EVPSA, said that despite faltering in recent months, students have made progress in explaining their views to the chancellor.

The three spoke to Yang about their opposition to the project and Yang’s involvement with TMT; according to Beasley, Yang described his role in the project as “miniscule… telling us about how his position on the board is a revolving position… and that [it] would be ending relatively soon.”

However, according to Beasley, Yang said he will not be stepping down from his position as chair of the board of governors of TMT, with the reasoning that the project would continue with or without his involvement.

Despite Yang’s reasoning, Beasley said Cowell, a Hawaiian native, urged Yang to consider the perspectives of UCSB students who may disagree with the project’s principles and its development on sacred Hawaiian land, which “was hurting [Cowell’s] people and his family.”

Beasley said that throughout the meeting, Yang maintained an “open” perspective and was “receptive to [their] conversation.” Despite discussing only “two or three” points during the meeting, Beasley said that Yang pledged to present the UC Student Association Letter opposing the telescope to the board at TMT’s next meeting in early January — a small victory in the eyes of Beasley, Cowell and Meijer.

During her closing remarks at the town hall, Pisciotta responded to a student who had asked how she maintains positivity in the face of despair.

“The way to do it is staying in the truth, speaking the truth and knowing that there still may be times where people may have misunderstandings and they still don’t understand,” Pisciotta responded.

“When you have it truly in your heart that you’re not treating people as the enemy… that’s when you treat them as a friend with aloha.”

Anyone concerned about endangered species or groundwater contamination can read the TMT environmental impact assessment. Endangered species are under greater threat from the protestors than construction of TMT. Hydrology is simply a non issue. Anyone concerned with cultural practices being interrupted should read the TMT management plan. There are no ritual or burial sites in or near the construction zone. It’s a big mountain. Anyone swayed by the argument that the mountain is sacred should remember that it’s immoral to impose personally held spiritual beliefs on other people. Anyone who wants to help native Hawaiians self-govern should recognize that blocking… Read more »

Or they could read the 1998 state audit or the 2010 NASA audit or the latest OKMA board meeting notes which show that the astronomers have a bad habit of pouring mercury, raw sewage, hydraulic fluid, lead paint, and other nasty things on the mountain.

Sure, TMT claims it will do better than the last set of astronomers, but that’s what they claimed as well.

Something not made clear in this article is that the science reserve (inside which TMT will be built) is public land, managed by the state of Hawaii. There is no history of native Hawaiian occupation, ritual, or burial in the construction area. It’s not inside any native reservation. It sits beside a much larger area used by native peoples for hunting and other resource gathering. The supposed issue of “consent” is ahistorical, not legally relevant, nor morally relevant.

You are incorrect. The science preserve is on some of the most sacred land on Mauna Kea. And, since the US took over Hawaii without recognizing the indigenous Hawaiians, there are no reservations.

You should study a bit more about Hawaiian history.

When so much of Hawaii’s history has been covered up, both literally and physically to benefit the occupiers and U.S. military the truth is not ahistorical, the truth is there and easy to find however unrecognized by your culture or lack of.

Please, let us quash scientific advancement and help keep kanaka maoli ignorant.(My apologies to Hawaiian speakers as I can’t get this laptop to do okina and kahako)

Moving the TMT won’t “quash scientific advancement”. It will work just as well there as it would in Hawaii, according to the TMT siting committee.

As one with decades in health care in Hawaii and whose wife has spent decades in education in Hawaii, I wish they would put all their protest efforts into things that would actually help native Hawaiians. Alcoholism and drug use is soaring in the native populations and their kids take school as a joke. And try to get a parent into the school for a conference with the staff, it is nearly impossible.

Of course the surveys still show that the majority of Hawaiians still favor the construction. so, let’s just listen to the vocal few.

“Of course the surveys still show that the majority of people still support segregation. So let’s just listen to the vocal few.”

NO!!! NO!!! It is not true that there are surveys saying the majority of people support segregation. STOP LYING

Take a breath. That is how these “activists” work. They make up lies and shout down anyone with opposing views or facts.

I’m not lying. I’m merely pointing out that segregation was popularly supported back in the day and was legal. It took unlawful protests to change things.

You must be looking in a mirror.

Wow! Very impressive come back (if you are a 5th grader)

This from the person that thinks ad hominems are a sufficient rebuttal.

In 1880, King (David) Kalakaua said he wanted to establish an observatory in Hawaii. Guess you idiots know what’s best for Hawaiians.

Liko is a bit of a hypocrite. There is instrumentation, on another sacred Hawaiian mountain site, that is used to measure solar activity and that information is used to protect communication satellites. Yet, I saw Liko on Oahu and he was using a cell phone. I guess it is OK to desecrate sacred sites as long as Liko and other protestors can use cellphones and GPS.