An ancient Triassic animal from a fossil site in Madagascar has provided researchers and the fossil record with a window into what was likely a “pronounced miniaturization event” that occurred near the common ancestor of the dinosaurs and the pterosaurs. 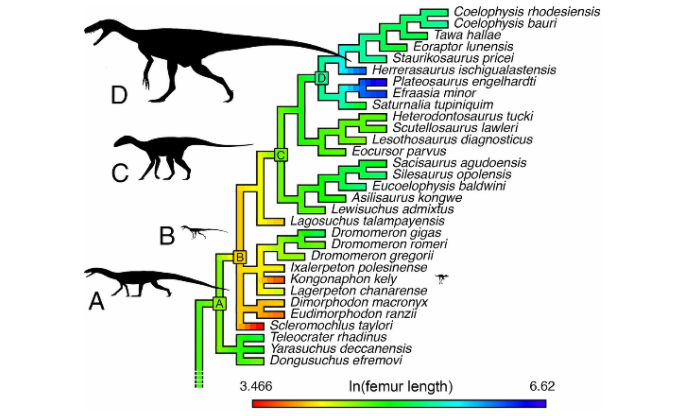 The body sizes of a number of archosaurs plotted on a consensus supertree. Courtesy of Andy Wyss

Andy Wyss, a professor in the Department of Earth Science at UC Santa Barbara who worked alongside researchers from Virginia Tech, the North Carolina Museum of Natural Sciences, the American Museum of Natural History in New York and the University of Antananarivo for this project, spoke with the Nexus regarding their discovery.

Wyss and his collaborators worked in Madagascar for a series of 10 summers, wherein the team’s fossil site in southwestern Madagascar bore a number of fruitful fossils numbering in the hundreds.

According to Wyss, Madagascar is useful as a paleontological site in particular due to its historical climatic conditions, its historical geographical placement and the presence of a large amount of sedimentary rock on the island.

“The places on the Earth’s surface where we have ancient fossils are: number one, where the organisms lived, and number two, also where sedimentary rocks are, which are the kinds of rocks in which fossils are generally found formed and accumulated,” Wyss said.

“Madagascar is a giant island; it’s actually the fourth-largest island in the world, about the size of California. As recently as Jurassic time it was connected to Africa,” Wyss added.

As Madagascar began its long journey, drifting away from the mainland, sediments would accumulate on both the island and the mainland, providing a convenient “geologic trap” to preserve the remains of many of the organisms found on the island.

“I work on our terrestrial backboned animals. We want sediments that are deposited in a kind of environment, like ancient rivers, for example,” Wyss said.

One such animal mixed in among those hundreds of  fossils was an ornithodiran archosaur from about 237 million years ago, dubbed Kongonaphon kely, or “tiny bug slayer.”

In order to better understand K. kely’s relationship to its other relatives, morphological analysis and dating were performed on fossils of the small animal which the researchers managed to find.

Unlike its famously enormous relatives, the dinosaurs, K. kely is remarkably small.

“It was a small-bodied, reptilian-looking animal — probably about the size of a pigeon, and it stood on its hind limbs,” Wyss said.

Although a complete skeleton of K. kely has not been recovered, the bits and pieces of the animal which the researchers have recovered have given them a high degree of confidence regarding K. kely’s size — as well as a good idea of what the animal was like. 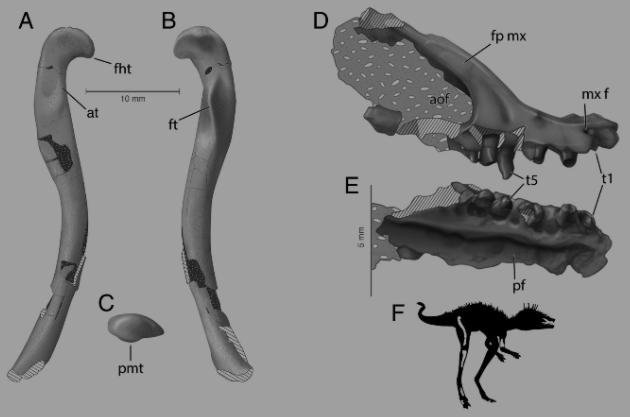 The anatomy of the femur and maxilla recovered of Kongonaphon kely. Courtesy of Andy Wyss

“Tooth size is really tightly correlated to overall body size; the teeth of this animal that we’ve found are extremely small. Partial jaws indicate how small this is,” Wyss said.

“Similarly, the length of the femur scales very closely to overall body size. We have a bunch of evidence that points to a small body size.”

Looking at the microwear K. kely’s teeth exhibited informed the researchers of the animal’s diet, this being insectivory. The shape of the teeth themselves, being simple and nondescript bulbous cusps, also steered the researchers away from concluding that it had a carnivorous or herbivorous diet.

However, perhaps the most informative traits to be gleaned from the fossils were the ones which may have followed K. kely’s descendents across species and the evolutionary family tree. According to Wyss, fuzzy skin coverings known as “fuzzy integument,” observed in both pterosaurs and dinosaurs, may have originated from a need for thermoregulation in the small-bodied K. kely.

Similarly, Wyss and his collaborators state that, given that miniaturization in other vertebrates is seen as a necessary precursor to the development of flight, perhaps it is the case that pterosaurs might not have become the first vertebrates capable of powered flight if not for the diminutive nature of K. kely.

“A good analog in our own history would be mammals. The earliest mammals were all small-bodied, and being insulated and having hair is quite important evolutionarily … Now, an elephant today would get by fine without having any hair, and the hair they have is quite sparse,” Wyss said.

“But the reason they still have it is because they’re descendants of that animal common ancestor, kind of a vestige of that early stage in their evolution. The fact that early [ornithodirans] were small-bodied has repercussions from everything that derived from that common ancestor.”