Some things just light up.

Across broad swathes of taxa, in fireflies, fungi, deep-sea fish and even dinoflagellates — which bring crashing waves to life with sparkling light — bioluminescence and the mechanism which governs it conjure up a common thread among unrelated animals. 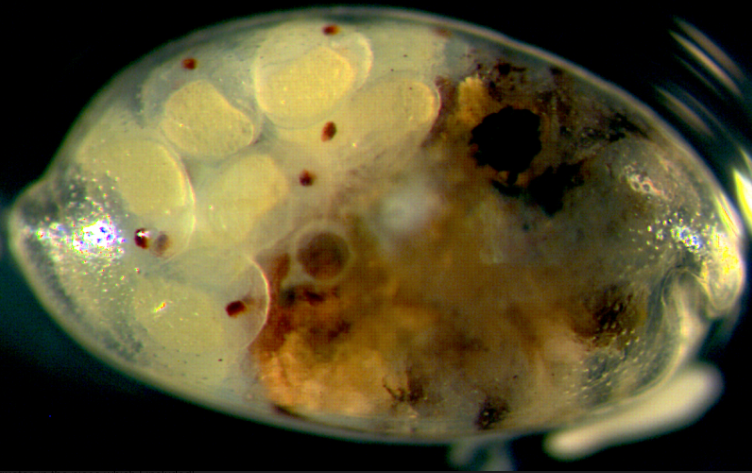 A brooding female of Vargula tsujii from the Oakley lab ostracod culture, 2 millimeters in size. Courtesy of Michael Drummond

In marine fish alone, bioluminescence has evolved independently at least 29 times. Especially in the ocean, it is a subtle yet inescapable trait.

There are three main components to bioluminescence.

“There’s a substrate, which is luciferin; there’s an enzyme, which is luciferase; and then oxygen is combined with those two things to create light,” said Jessica Goodheart, a Scripps postdoctoral scholar at UC San Diego.

Goodheart formerly worked with the Oakley Lab at UC Santa Barbara, where she studied ostracods, small bioluminescent crustaceans found all across the world. Specifically, Goodheart worked with her collaborators to study the California sea firefly (Vargula tsujii), an ostracod which uses its bioluminescence for defense.

V. tsujii synthesizes its own luciferins, unlike other bioluminescent organisms like cnidarians and brittle stars that instead make use of lucinferins they obtain through their diet.

An article, published in Scientific Reports, details the team’s efforts to establish a laboratory culture of V. tsujii. According to Goodheart, their culture is unique for a number of reasons.

“No other bioluminescent ostracod has been cultured before so that’s a completely new thing,” Goodheart said.

“There are fireflies that are cultured in the lab and they produce their own luciferin, so this isn’t necessarily the first organism that one could culture that produces its own luciferin. However, this has other advantages that other bioluminescent organisms don’t have.”

In particular, V. tsujii has a short life cycle and is remarkably bright compared to other bioluminescent organisms, making it easier for the researchers to work with.

In order to establish a culture, the researchers first gathered specimens from wild populations, largely from areas near Santa Catalina Island. Specimens gathered for the culture were then placed in tanks. These tanks needed to be modified, however, in order to fit the ostracods’ needs.

One initial problem came to light when the standard fish filters in the tanks would suck up ostracods into them. In order to rectify this, an undergravel filter was put into place.

“[Oakley] built an undergravel filter. What that means is that the water filters down into the sand to exit the tank, and we constantly have incoming water flow. This doesn’t cause problems for the ostracods because they normally just dig into the sand and stay there during the day,” Goodheart said.

Another conundrum was deciding what to feed juvenile ostracods. Although adults were easy to feed, as they subsisted on a diet of fish flesh that was available to buy in many places, the juveniles wouldn’t bite.

“We needed a food source; that was a pretty foundational thing. Essentially what was happening was, we were getting juveniles, but they wouldn’t grow up because they weren’t eating,” Goodheart said.

Eventually, they came up with the idea to use chicken liver to feed the juveniles, drawing inspiration from researchers who’ve used chicken liver and other liver more generally to attract a species of ostracod called Vargula hilgendorfii, native to Japan.

“The juveniles loved it. It seemed to be one of the main things that allowed the culture to get started and really ramp up,” Goodheart said.

With the culture established, the team was able to make a number of observations, starting with mapping out the embryogenesis of V. tsujii. They then mapped the size classes of instar development from one moult to the next, thereby creating a timeline for V. tsujii — with the complete life cycle lasting three to four months.

One unique aspect of the project was the diversity of institutions involved, with Massachusetts Institute of Technology and UC Santa Cruz collaborating with the Oakley Lab to assist with genomic analyses, as well as California State University, Los Angeles to gather population genetic data and measurement data.

“We’ve been able to pull together these [kinds] of disparate pieces into a more cohesive story, which is really nice,” Goodheart said.

Meanwhile, at UCSB, a number of undergraduates from the College of Creative Studies, including Geetanjali Minsky, Mira N. Brynjegard-Bialik and Michael S. Drummond, assisted with the laboratory culture itself.

“A lot of the culture work — in terms of actual measurements and determining whether we had actually completed the life cycle, as well as looking at the development in terms of both embryo development and juvenile development — we had undergrads doing,” Goodheart said.

Now, while Goodheart has moved away from ostracods since going to UCSD, the Oakley Lab is still hard at work studying the tiny crustaceans. Recently, they have begun attempts to establish another ostracod laboratory culture, these being related ostracods from the Caribbean that use bioluminescence in courtship displays.

“I think one of the most exciting things about this is that having this culture means that we have a model with which to work to begin bringing other species into the lab,” Goodheart said.

“It opens up a lot of doors for us in terms of working with a bioluminescent system that is used in multiple ways across a number of different species, but also has a very clear and similar biosynthetic mechanism across all of those different species.”