Unquestionably, the story of the island fox (Urocyon littoralis) is one of resounding success in the field of conservation. 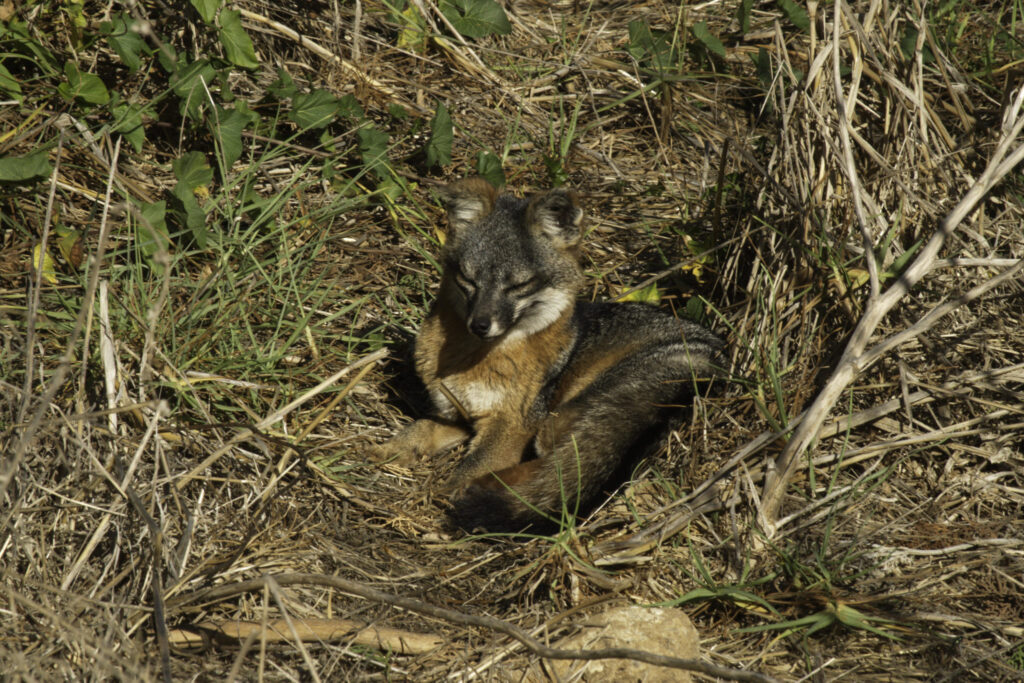 Since 2018, FIF has provisioned researchers and ecologists with $5000 in yearly grants. Courtesy of Mike Watling

The foxes were almost obliterated by a combination of disease and invasive predators in the late 1990s. Extinction appeared so imminent that entire island populations were scooped up and put into captive breeding programs.

Then, with decisive action taken by conservationists to vaccinate foxes and remove introduced  species on the island, the foxes recovered almost as quickly as they had collapsed. By 2016, several populations under the Endangered Species Act were delisted, the fastest recovery of any mammal ever.

However, with delisting comes a new set of challenges for the fox as federal funding has diminished in response, despite the fact that the animals still face a number of threats — both new and old.

“Now that the foxes have been delisted, it’s harder for organizations to get money. There’s less federal funds available … it becomes more important for nonprofits to help get money and fill those funding gaps,” said Mike Watling, a member of the advisory committee for Friends of the Island Fox (FIF) and a naturalist working in the Channel Islands.

Established in March 2005, FIF is a nonprofit organization dedicated to supporting “efforts to preserve and protect the island fox (Urocyon littoralis) on the California Channel Islands through conservation and education programs.”

FIF works alongside the patchwork of organizations governing the archipelago, including The Nature Conservancy — which owns the majority of Santa Cruz Island — the Catalina Island Conservancy and the National Park Service.

“We work directly with their head biologist for the [National Park Service], Laura Shaskey. She’s the terrestrial biologist out there. We work with her and talk about what her needs are and then move on to provide funding where we can to meet that need,” Watling said.

According to Watling, FIF also works to procure funding for materials like radio collars to monitor foxes and fox boxes for parkgoers to use, as well as original research to further understand the island fox and contribute to the scientific literature.

Using radio collars to monitor foxes can be useful in many different senses. Attaching collars to young, unvaccinated foxes, known as sentinels, give conservationists a window into the movement of foxes as well as the causes of fox mortality.

“With these foxes, the radio collar has a mortality sensor and it gives off a specific signal [so] that the biologist can recover the carcass of the fox and determine the cause of death and if action is needed,” Watling said.

Fox boxes, meanwhile, operate similarly to bear boxes in places like Yosemite and Sequoia National Park, keeping foxes away from food brought in by park visitors.

“It’s not so much so the foxes don’t go raiding trash cans,” Watling said.

“What happens is the foxes will get into a dumpster. And the foxes are small; they’re the size of a house cat. They’re really one of the smallest fox species in the world. They’re so small that if they fall into the big dumpster-like trash cans, they can’t get out and they’ll eventually starve.”

Perhaps of most interest, however, is the original research which FIF has supported. FIF has funded investigations into tick-borne diseases on Santa Catalina Island and serological tests for internal parasites plaguing foxes on San Miguel Island, for instance.

Since 2018, FIF has provisioned researchers and ecologists with $5000 in yearly grants, providing grantees with money to funnel into a number of research topics — as well as conservation initiatives.

“We ask, ‘Are we going to get the most out of the money that we’re providing to further […]our mission regarding the foxes? What’s going to be best for the researchers and their work?’” Watling said.

In 2019, one such project funded with grant money from the organization was a series of necropsies headed by Stacy Baker and Juliann Schamel. The duo collected and processed fox teeth held in the Santa Barbara Museum of Natural History.

With this information, they were able to determine the ages of foxes at death by looking at the cementum in teeth, a “thin mineralized tissue covering the root surface of teeth,” according to Watling.

This year, despite the disruption from the novel coronavirus, FIF still plans to issue grants as before, with applications due in late August and grants awarded in late September.

As Watling said, continued interest in further understanding the foxes is the best way to safeguard their survival, as they are animals sequestered on these small islands — as well as being genetically very similar.

“We’re in the middle of a pandemic here. Can you imagine if we were all genetically the same, and COVID came in? Imagine how quickly that could run through our population. The foxes are facing similar challenges,” Watling said.

“This is an animal that — quite literally — has nowhere else to go.”