The Daily Nexus
News
LRC Fights To Retain Protected Counseling for UCSB Students, Which Could Disappear by July
June 28, 2020 at 3:45 pm by Jackson Guilfoil

Beginning on July 10, UC Santa Barbara’s Associated Students Legal Resource Center will no longer be providing privileged legal counsel, a service UCSB students have been paying for with campus fees since 2001, according to the resource center’s personnel. 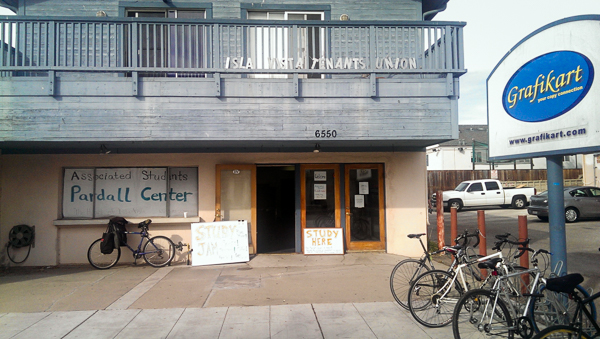 The Legal Resource Center is located at the Pardall Center in Isla Vista. Nexus File Photo

The Legal Resource Center (LRC) currently has two lawyers contracted as student legal services advisors; the positions provide confidential, privileged legal counseling for students. The student legal services advisor job description, meant to convert the contracted lawyers into employees, was changed from “inform and advise” to “educate and inform,” according to the amended job description, which the Nexus obtained from Sabina Menzhausen, the incoming student unit director for the LRC and a fifth-year biopsychology major.

This means that the LRC — located at the Pardall Center in Isla Vista — will no longer offer its protected counseling service.

UCSB offered Robin Unander, the current Associated Students (A.S.) LRC student legal services advisor, the position under the new job description. The other attorney working for the LRC, Ron Perry, said he did not know enough about the negotiations between Unander and UCSB to appropriately comment.

Unander’s contract was supposed to expire on June 30, but UCSB extended it to July 10 in order to allow for more time to negotiate the job description

If UCSB does not reverse the contract’s description of the job, UCSB students will be without privileged, confidential counseling at the LRC, according to Menzhausen.

With the new changes to the job description, students may ask general legal questions, such as how much time a landlord has to return a security deposit, but students cannot obtain legal counsel or case-specific legal advice from the LRC employee. The student legal services advisor must refer them to someone else, possibly a lawyer retained as a vendor by the university, according to Unander.

UCSB spokesperson Andrea Estrada said in an email that the “legal guidance resources” will continue at the LRC, and that the current concerns over LRC services are based on a “false rumor,” but she declined to elaborate further.

Estrada’s comments are “confusing” according to Unander, who said that Estrada’s response does not make sense given the job description in the student legal services advisor contract.

“[The changes to the job description] give the university, as well as university police, etc., access to these kinds of cases students come in with and that abolishes the integrity of what the LRC stands for,” Menzhausen said.

“This could castrate that service by eliminating [students’] ability to walk in there and consult on their legal issues without fear of being exposed,” she continued.

Nancy Hamill, UCSB chief campus counsel, did not respond to requests for comment.

The change in the student legal services advisor job description also means that the advisor will become a mandated reporter, an employee who is legally required to report sexual misconduct allegations, and could be compelled to disclose information a student told them to the authorities, according to Menzhausen.

The new job description violates the ballot measure which students voted on in 2001 to provide “free legal education and consultation” as a part of the LRC’s mission, according to Menzhausen.

In an email between Melinda Crawford, a UCSB human resources official, and Unander, Crawford said that the amended job description means that Unander “will not be practicing law in this role,” and that Unander is “not permitted to form an attorney-client relationship with anyone.” This email was provided to the Nexus by Unander’s lawyer, Erin Parks.

The job description was amended in mid-June, when Unander asked for employment benefits such as retirement credits, and that the university pay for her mandatory continuing legal education and annual state bar fees during the contract’s negotiations, according to Parks.

Parks alleges that UCSB made changes to the job description offered to Unander as a retaliatory act after Unander requested employee benefits. Parks said that UCSB misclassified Unander as an independent contractor and that Unander’s responsibilities under her current job description fall under the legal definition of an employee, thus making her eligible for employee benefits.

“When a person makes a claim that there’s potential violations of law, and immediately something happens like this, that smacks of retaliation,” Parks said.

“When an individual says, ‘You’ve been breaking the law, you’ve been violating the law and it’s damaged me,’ and the employer then does something to adversely affect their continuing relationship like, ‘We’re no longer going to let you practice law,’ that’s huge, that’s retaliation,” Parks continued.

Estrada did not respond to a request for comment regarding these allegations.

Parks requested that UCSB allow Unander to continue working beyond the June 30 expiration date of her current contract, which allows her to offer privileged counseling at the LRC.  The LRC hopes the extension will allow for more time to negotiate the job description while maintaining the current level of legal service to students, according to Unander, who added that UCSB has not yet responded to that request.

“If they do not agree to maintain status quo then on July 1 LRC will not be able to function,” she said in a text message to the Nexus.

Unander has worked with the LRC as an independent contractor since 2003, and since she first joined, Unander said the LRC has provided counsel to at least 16,000 students.

Unander noted that, due to working on behalf of the LRC for over 16 years, she has no private practice to fall back on.

In the amended job description, Unander would be classified as an official employee of UCSB, rather than an independent contractor, but because she will not practice law in the position, she would not receive the benefits associated with being a practicing attorney.

Employers of lawyers normally reimburse their bar fees, and Unander’s legal counterparts at UC Los Angeles, UC San Diego and UC Berkeley — who are all employees of the university — have their bar fees reimbursed, according to Parks.

She also noted that the updated position does not require that the employee holding it have a law license.

Unander said that the new rules would present a dilemma for whoever fills the position, since in order to know whether or not they can simply give general legal information or recommend consultation with a lawyer, they need to know what legal problem a student has, which would not be privileged if disclosed.

In a normal school year, the LRC serves 1,000 to 1,300 students, primarily dealing with issues relating to crime, according to Unander. Students also come to the LRC for housing issues and conflicts between students and their landlords, according to Menzhausen.

The LRC also helps students with more serious legal issues. Erick Velazquez Andrade, a fourth-year microbiology major, said he uses the confidential legal counseling services at the LRC to navigate the complex legal web of immigration law. Recently, he used the LRC for help in filling out paperwork regarding his legal status, he told the Nexus.

“It’s imperative that I’m able to stay here in the United States, be able to finish graduating from UCSB,” Velazquez Andrade said. “I wouldn’t be able to have access to an immigration law firm otherwise.”

Velazquez Andrade was also one of over 40 tenants who sued local landlord Isla Vista Luxury Living (IVLL) over security deposit disputes and won, a victory he credits to the consultations he received at the LRC. Velazquez Andrade said the LRC gave him the necessary tools to present and win his legal argument against IVLL through representing himself in small claims court.

He said that he was able to pay for summer classes with the money he received from that lawsuit, which amounted to $1,020 out of his $1,750 security deposit.

Menzhausen said she worries about students avoiding the LRC in the future out of fear that what they divulge to the student legal services advisor will not be privileged.

“[Students are] still going to be paying for the service, but they’re not going to be able to access it and might choose not to out of fear of potential retaliation or consequences,” Menzhausen said.

Correction [June 28, 6:45 p.m.]: A previous version of this article was corrected to refer to counseling as “privileged” or “protected,” not “confidential.”

A previous version of this article also incorrectly stated that Unander’s current contract expires on July 1 and has been corrected to reflect the correct date of her contract expiration, June 30.

This article was also corrected to attribute the LRC to providing counsel to at least 16,000 students since 2003, not Unander herself.