The Daily Nexus
Virtual Reality
Now More Than Ever, Binge Watching Is a Necessity
June 2, 2020 at 8:00 am by Katie Caracciolo 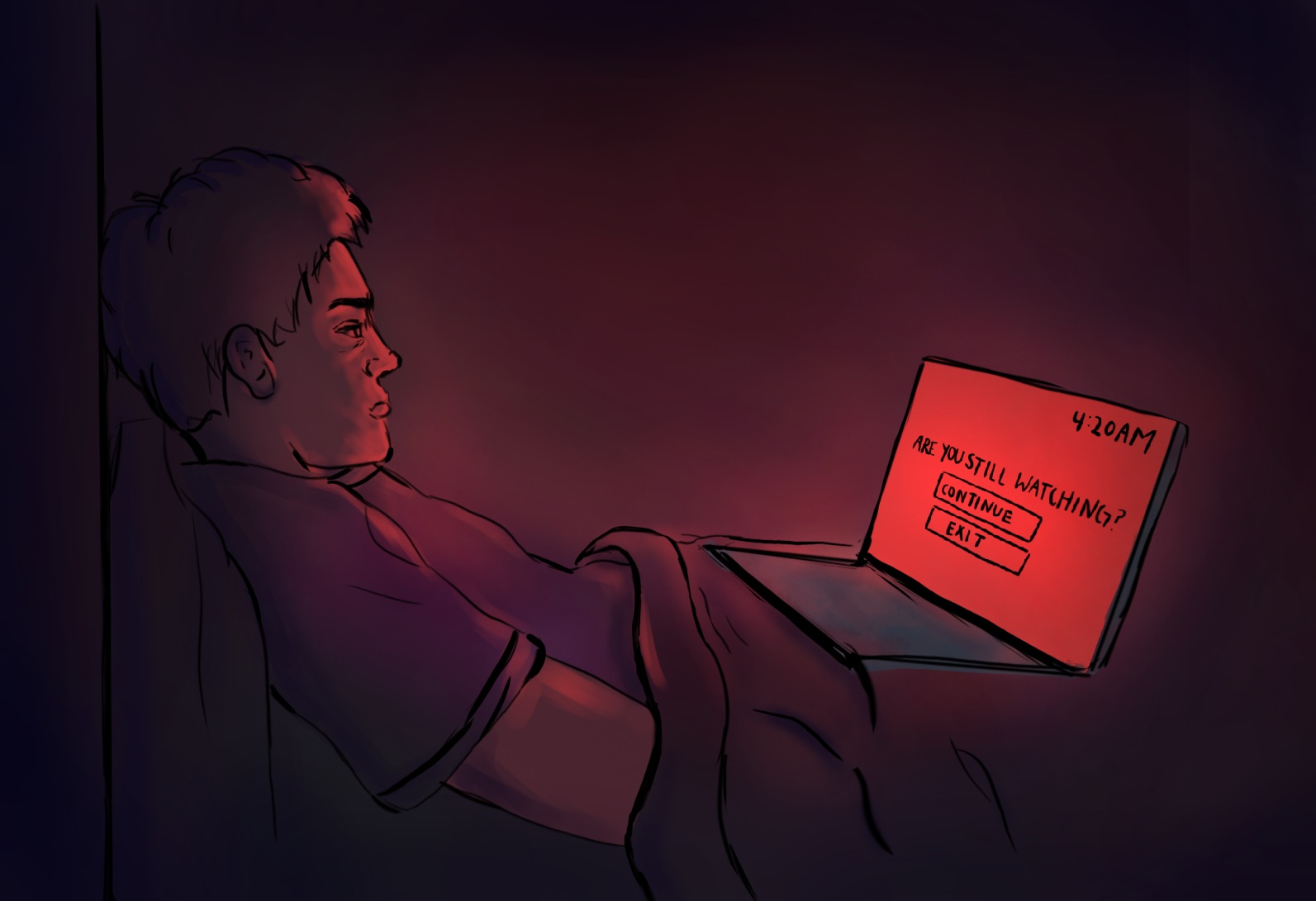 With countless jobs and internships cancelled and classes moved online due to the stay-at-home orders following the spread of COVID-19, many of us suddenly have much more time on our hands. If you’re like me, you’ve been spending the vast majority of this time watching more Netflix than you’ve ever watched in your life.

Whether you view a movie every other night or five episodes of Grey’s Anatomy per day, binge watching streamable content has been a great source of comfort during these trying times. Indeed, research shows that Netflix usage has risen at least 16% since the first COVID-19 case in the US, revealing an increasing reliance on film and television media to help us through the dark reality of a global pandemic.

To some, spending so much precious time consuming mindless content may seem like a waste of energy. After all, stay-at-home is a great opportunity to get productive and start a project or learn a new skill, right?

Perhaps the most motivated individuals will use this unprecedented extra time to bake bread, complete that 4,000 piece puzzle that’s been lurking in the closet for a decade or “Text all your exes just in case you have one more thing you wanted to get off your chest,” as suggested by item six of a list of “100 things to do while stuck inside due to a pandemic” from USA Today.

Productivity may seem like the reasonable response to the boredom of a government-imposed quarantine, but I believe that the mounting pressure to be “productive” during an already stressful time is insidious. Hyperproductivity can lead to burnout and emotional fatigue in a time when both physical and mental health should be our number one priority.

I am of the opinion that relying on fictional media is a healthy coping strategy, especially during times of globally shared trauma. Fiction evokes strong emotions that help us process our tumultuous reality in a physically and emotionally safe environment, as well as offers an escape from our anxiety-ridden reality.

As psychology professors Raymond A. Mar and Keith Oatley write in their study on “the function of fiction,” narrative fiction “[offers] models or simulations of the social world via abstraction, simplification, and compression…[creating] a deep immersive simulative experience of social interactions for [the audience].”

While it is slightly depressing to consider, absorbing Netflix’s character-driven teen dramedies like “Never Have I Ever” and “The Half of It” may help us to subconsciously practice social interaction in a time when our in-person conversations are entirely limited to mealtime chats with family members or housemates. In its own way, Netflix’s original content is preparing us for a post-isolation world, when we will have to relearn how to interact with people other than the members of our household in order to break out of the “quarantine state of mind.”

Turn down the lights, brew some tea and grab your favorite snack, because if there’s one curve we don’t need to worry about flattening in these trying times, it’s Netflix usage.

Taking this “immersive simulative experience” to the extreme, Dan Olson of the YouTube channel Folding Ideas revealed in his March 31 video “I Can’t Stop Watching Contagion” that he has watched the 2011 Steven Soderbergh film Contagion “over fifteen times in the last few weeks.” He is not alone in this grim fascination, for he reports that “according to Netflix, at the time of writing, it is the second most-watched thing in Canada.”

This may seem like a self-destructive plot to amplify anxiety, but as Olson puts it, “watching a disaster film in a disaster [exposes us] to what we’re already experiencing. Amplifying existing emotional states, it works as a form of emotional inoculation. I am scared and anxious and uncertain, and so I will make myself more scared and more anxious and more uncertain, because it’s still fiction. It’s still safe. It still has an end. It is bounded.”  There is a certain comfort in witnessing the resolution of a large-scale pandemic, the real-world equivalent of which still has no end in sight.

This helps to explain the sudden attention in the Twitter meme-iverse to the oblivious beachgoers and irresponsible mayor of 1975’s “Jaws.” While the parallels to our current reality are amusing at best and disturbingly uncanny at worst, we have something to learn from movies like “Jaws”: how to deal with a disaster or, perhaps more informatively, how local institutions, federal governments and even individual citizens can mishandle their response.

Beyond fiction’s practically and emotionally instructive qualities, it also provides the core psychological necessity for a society seemingly in freefall: escapism. With unemployment reaching Great Depression levels, it is no surprise that modern Netflix subscribers are turning to the streaming service in the same manner that Depression-era Americans, seeking a respite from the hardship of everyday life, “[flocked] to the cinema in unprecedented numbers” during the 1930s.

Just as our predecessors lost themselves in the wonderful world of “The Wizard of Oz,” we turn to personally and historically nostalgic shows like “Hollywood” and “Avatar: The Last Airbender,” now streaming on Netflix, when we need a break from the endless new cycle of death and disease.

The CDC itself recommends “[taking] breaks from watching, reading, or listening to news stories, including social media [since] hearing about the pandemic repeatedly can be upsetting” — and becoming engrossed in the worlds of the nefarious big cat traders of “Tiger King” and the murderous small-town teens “Riverdale” seems, to me, like the perfect solution.

Far from being a waste of time, relying on fiction to help ease us through the harsh reality of a world ravaged by COVID-19 helps us to process emotions and just forget about the world for a while, whether it’s 40 minutes or five hours at a time. So turn down the lights, brew some tea and grab your favorite snack, because if there’s one curve we don’t need to worry about flattening in these trying times, it’s Netflix usage.

Katie Caracciolo has streamed 45 movies in the past 60 days and does not regret one second of it.