For students across the country, moving back to their hometowns and socially distancing from friends and loved ones in light of the coronavirus pandemic has been a difficult, and sometimes lonely, adjustment.

While some are turning to FaceTime, Zoom and Snapchat  to stay connected, another platform has found itself uniquely beneficial for friends and communities looking to keep in touch: video games. 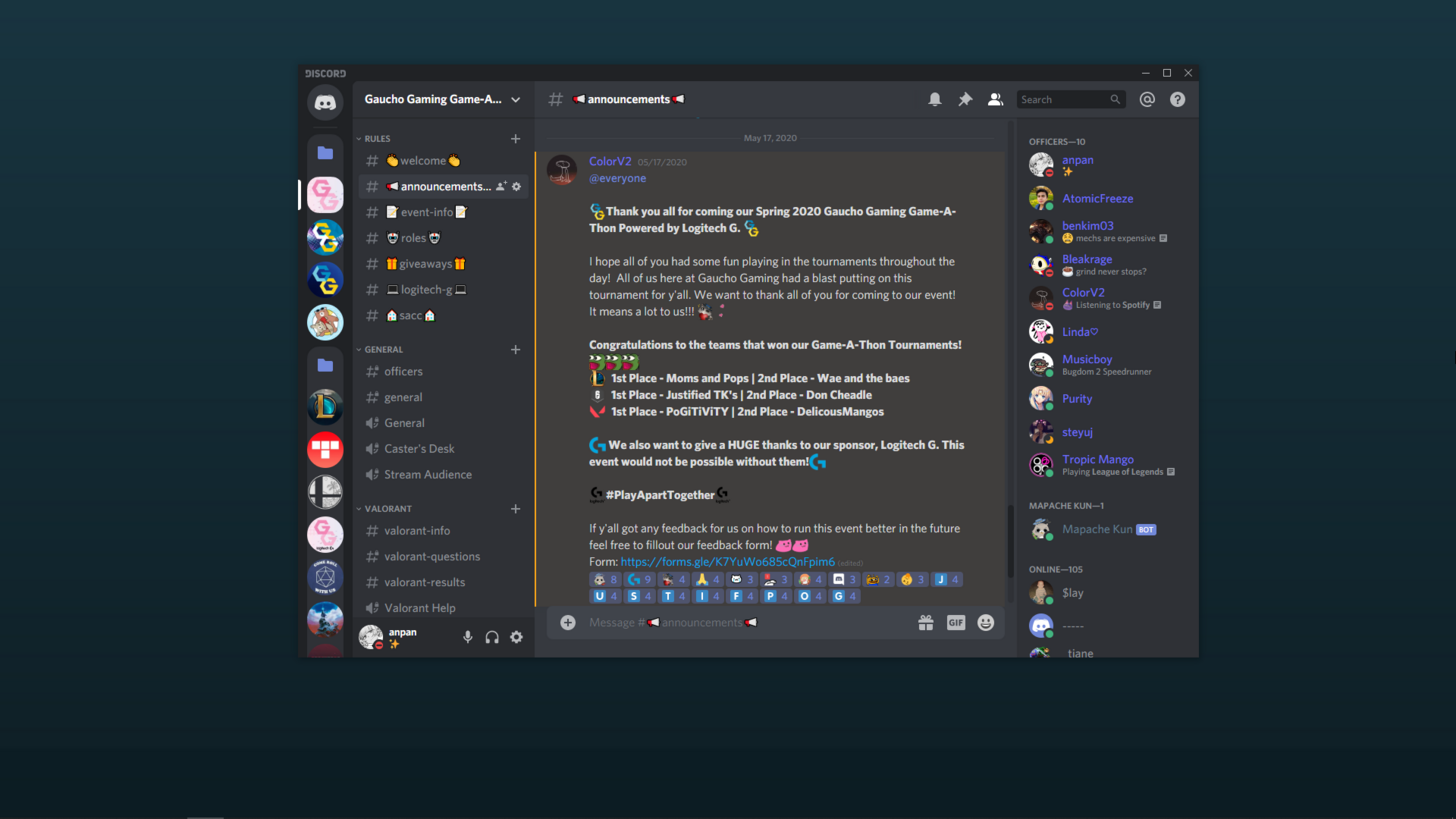 Gaucho Gaming hosted a Game-A-Thon on their Discord server on May 16. Courtesy of Gaucho Gaming

For members of Gaucho Gaming, UC Santa Barbara’s official gaming organization, gaming has always been a way to come together as a student community. The group, created in the fall of 2015, offers a variety of different gaming platforms for UCSB students from the amateur to competitive level. Gaucho Gaming has 942 members on its Discord server, which the group uses to promote and organize events.

“At school, we also have in-person events, so that definitely brings people together and we just all have a common interest,” Annie Huang, a second-year statistics and linguistics double major and the co-president of Gaucho Gaming, said. “So now, we have only online communication and activities.”

While clubs have faced difficulties staying together as a result of having their members strewn across the country and isolated at home, Gaucho Gaming is uniquely positioned to make the leap from in-person social events to online-only communication.

“Since gaming is, obviously, an online thing, it’s been a way to keep in touch with friends, and keeps me connected ” Huang said.

“We have a joke, that we’re helping save the world by staying inside and gaming,” Huang added.

Normally, the club hosts “regular meetings, fun socials, competitive events, and a huge LAN event every quarter,” a local area network that interconnects computers within physical spaces like room or arena, according to its website.

The Discord server allows members to make friends and find gaming buddies, as well as “more serious stuff” like opportunities for jobs within the gaming field, Huang said, which has also continued during spring quarter. This Saturday, Gaucho Gaming and UCSB Esports will host a panel in the Discord called “Career in Esports,” with industry professionals from Team Liquid.

This year, the club has worked to expand its professional network with the help of Francisco Rodriguez, a fourth-year global studies and economics major and the club’s esports outreach officer, who organizes panels and helps gamers understand career paths within the gaming industry.

While the group had a “rocky start” with participation at the start of the online quarter, according to Huang, the cancellation of in-person socializing events forced them to get creative. And with computer-savvy students at the helm, Huang said she has been pleased with recent event participation, despite the challenges they’ve faced.

On May 16, Gaucho Gaming hosted its first-ever Game-A-Thon, sponsored by the gaming gear company Logitech G, where players participated in popular video games League of Legends and Valorant for prizes including Logitech G computer mice, gift cards and game credits, according to their Facebook page.

The Game-A-Thon, which was meant to serve as a replacement for the group’s popular LAN event, saw about 200 participants.

Gaucho Gaming has also hosted other events this quarter, like weekly game play, giveaways, and watch parties, according to their Facebook page.

“For weekly play, we let our members know what servers we will be on, and what time, and then sort of host spaces for UCSB students to play,” Rodriguez said.

The club is also reaching out to neighboring schools like UC Los Angeles and Cal Poly to host interconnected events.

“Doing these things online might give us the opportunity to meet up in person,” Huang said. “That’s definitely something to consider.”

The group also organizes teams for specific video games; tryouts for UCSB’s League of Legends A and B competition teams recently took place. The event invited all UCSB students to try out, including incoming freshmen and transfers, according to the group’s social media.

Huang emphasized how video games and the collaboration that Gaucho Gaming provides gives students the opportunity to connect and socialize during what can be a lonely isolation. Although video games sometimes get a negative reputation as an isolating activity, she explained, they can also be a force for good.

“Being indoors more often has brought our online community together.”

Read the room. No one gives a fuck about this right now. Might as well just delete the fucking post. #defeunddailynexus