The Daily Nexus
Nexustentialism
It's satire, stupid.
Stats Indicate for First Time in 300 Years, More People Baking Bread Than Having Sex
May 15, 2020 at 4:20 pm by Emma Demorest 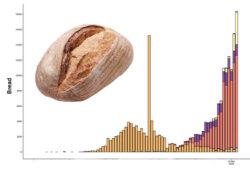 Researchers at UC Santa Barbara have recently released data collected within the past two months that has shaken the university and the surrounding community to its core. Due to the COVID-19 outbreak, a mere fraction of the robust UCSB student body is actually getting it on.

“Before the outbreak, 95% of the Isla Vista population was really boning hard, because we’re big ol’ sexy horndogs,” said researcher Stayn Side, “but now, that number has been reduced to the population living with their significant others, which brings the average percentage of people having some ‘pumpin’ fun time’ to about 10%.”

This is a jarring reality for UCSB students, who famously rate No.1 in overall U.S. university hotness. However, those grappling with this newfound sexual frustration have now turned to the pastime of our ancestors which, no one would argue, is just about as good as sex itself.

“What we have is kind of a natural phenomenon,” Side said. “For the first time in over 300 years, our data indicates that more people are turning to baking bread than engaging in some ‘afternoon delight,’ or ‘creaming the twinkie,’ if you will.”

Much like the “forbidden polka,”, bread has served as a cornerstone of the insatiable human diet, and sexually frustrated gauchos seem to be trying their best to curb their cravings for the old lust-and-thrust.

“All my I.V. hookups are out the window now,” student Heather Ornees said. “I haven’t gotten laid in so long, but this has been a great distraction. I just take the dick — I mean — dough, and I just knead and knead and knead, and knead and…”

Some, like English major Greta Laeid, say that they have turned to baking upwards of 10 sourdough loaves a week.

“I don’t really remember what sex is like at this point,” Laeid said. “So putting my dough in the oven is about as close as I’ll get to seeing anything rise.”

Emma Demorest is gluten intolerant — just think about what she is going through right now.