The Daily Nexus
Science & Tech
Experiments With Drosophila Flies Raise Questions About Function of Opsins
May 9, 2020 at 8:51 pm by Sean Crommelin

Opsins, once thought to be light-dependent proteins, have been observed operating in a number of different sensory faculties in Drosophila flies — a phenomena which is spurring more and more research questions. 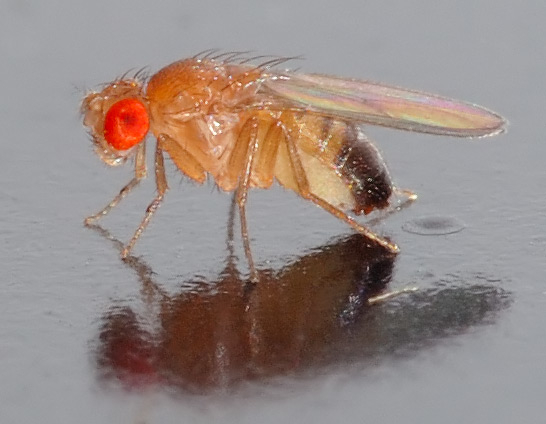 A paper, authored principally by Nicole Leung, a former doctoral researcher with UC Santa Barbara’s Montell Lab, and published in Cell, describes one light-independent chemosensation function of opsins in detecting and relaying signals from aristolochic acid, a plant-derived bitter compound. Leung began doctoral work on the project in Dr. Craig Montell’s lab during Summer 2016, having worked in the lab since Spring 2014.

“The most significant [finding] is that opsins detect chemicals and does not require light or the chromophore to do so,” Leung said.

While the paper is the first demonstration of the role opsins play in chemosensation, prior research by the Montell Lab and others have “shown roles for opsins in other Drosophila sensory systems, such as temperature sensation, hearing, and proprioception,” according to Leung.

These recent developments are remarkable. For over a century, opsins have historically been observed operating in rhodopsin, a light receptor. Their ever-broadening role, then, is a paradigm shift of sorts for the existing scientific literature, according to Leung.

“Work done in the Montell lab [previously] found that sensation of a bitter chemical called aristolochic acid required protein components that overlap with the visual system.”

Those components comprise a signaling cascade which converts sensory information into electrical signals that the neurons are able to carry to the brain. In Drosophila, three types of opsins, Rh1, Rh4 and Rh7 are observed being used to sense aristolochic acid.

The researchers made use of Drosophila flies as a test subject in the neuroscience research, using behavioral assays to gauge their attraction or repulsion to particular foods. Two dining options were laid out: a sweet, sugary one which would attract flies, and a bitter one which flies would avoid.

“Drosophila is a great study subject for many fields of biology and particularly for neuroscience. The genetic tools that have been developed and are available for use to manipulate genes and particular populations of neurons are extremely powerful to understand precisely the function of those genes and neurons.”

“We found that flies with mutations for certain opsins avoided the bitter option less, meaning that they show deficits in avoiding the bitter option. This led us to investigate further whether opsins are important for detecting bitter chemicals,” Leung said.

Alongside this, the researchers made use of electrophysiology, allowing them to record neurons on the tongues, or labellums, of their oblivious insect subjects. When flies were subjected to the bitter option, the researchers would detect electrical signals from particular neurons.

“However, when we did the same recordings with flies that lack certain opsins, they show significantly less electrical impulses, suggesting that opsins in these neurons are required for bitter chemical sensitivity.”

A significant difficulty encountered during the research was finding a method to reliably detect opsin proteins present in the fly tongue. It was discovered through other methods that the levels of opsins present on the tongue are notably low.

“[We] had minimal success. We think this is also a biological/physiological phenomenon to prevent light from interfering to opsin’s function to detect chemicals.”

Due to the fact that opsins need to carry a chromophore, a chemical component and a derivative of vitamin A, in order to detect light, Leung believes the argument could be made that the original purpose of opsins is in chemical detection. This is a claim which is further supposed by the fact that the opsins in question didn’t need to be coupled to a chromophore in order to detect the chemical.

“The most significant [finding] is that opsins detect chemicals and does not require light or the chromophore to do so,” Leung said.

While Leung graduated from UCSB in June and has since moved onto a postdoctoral position at Stanford University, the Montell Lab continues to conduct research regarding the different functions of opsins. Recently it has published a paper centered on another opsin which appears to play a role in “combining sweet sensation and cold temperature sensation,” as Leung puts it.

In that study, Drosophila have been observed exhibiting differing neural responses to sugary food depending on the temperature, with sugary food perceived as less “palatable” during slightly cool temperatures. A rhodopsin, Rh6, is the culprit.

“We are hoping that our work will catalyze more studies of opsins that are expressed outside of the eye, e.g. brain, heart, skin etc. so that we can have a better understanding of light-independent functions of opsins.”