The Daily Nexus
Society & Psychology
Gender Diversity and the New Discoveries It Brings to Neuroscience
May 4, 2020 at 8:00 am by Hannah Hirou

In the last 100 years, science has made profound discoveries and expanded in all directions. Behind the scenes, however, there has been a silent struggle for gender equality. This has had far-reaching effects. 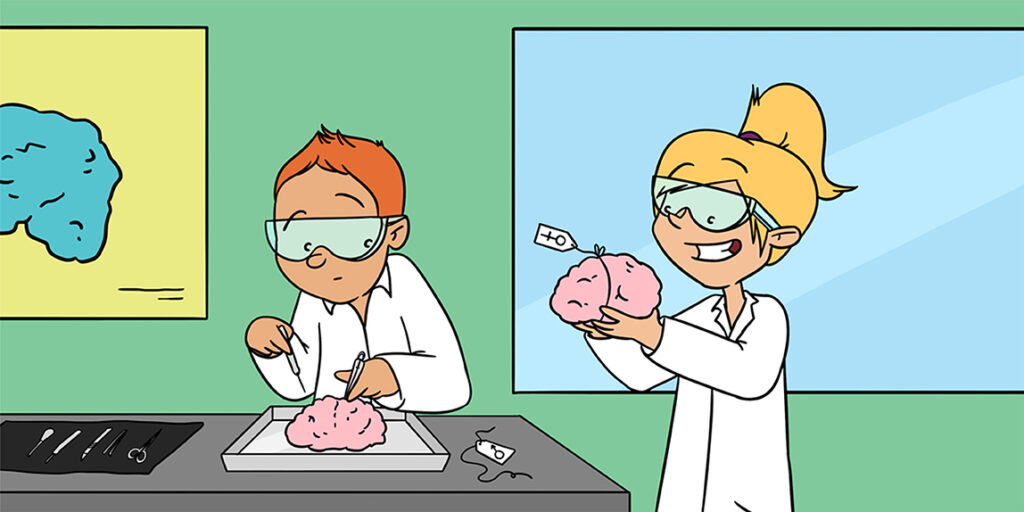 Courtesy of Frontiers for Young Minds

Emily Jacobs is a UC Santa Barbara professor in the Department of Psychological & Brain Sciences who studies the effects of menopause on the brain as women age. Jacobs recently penned an article in Frontiers for Young Minds to highlight the hurdles that women face in science and to argue that diversity in science drives innovation and can encourage school-aged children — especially girls — to pursue science.

When Jacobs and I talked on the phone, we chuckled at the fact that neuroscience, in its quest to study the impacts of aging on the brain, has taken so long to consider how menopause affects the brain, as it just seems so obvious to a woman. It illuminates an issue that is common in science and that is the underrepresentation of both female researchers and scientific studies about women.

For one thing, it limits the diversity of researchers that bring their own unique set of questions. It is evident that one’s life experience may play a role in the questions that a scientist may ask.

Women have slowly edged their way into the workforce over the last century and science is no exception. In 1927, less than 100 years ago, the Fifth Solvay Conference in Belgium brought together 29 of the arguably most famous scientists of all time. All but one, Marie Curie, were male. Today, the gap has narrowed but still remains large in some areas of S.T.E.M., such as aerospace engineering where less than 12% of tenure/tenure-track faculty are female.

Jacobs and I discussed some of the areas that progress could be made. “Men faculty far outweigh women faculty in S.T.E.M. disciplines, so that’s something we need to correct,” Jacobs addressed.

Gender bias in S.T.E.M. often goes unseen but that doesn’t mean that it doesn’t exist. In one remarkable study, applications — identical except for the random assignment of either a female or male name — were mailed to hiring lab managers at research universities. Managers were asked to rate the applicant’s competence and suggest a starting salary based on the applicants’ application materials.

“They found that the ‘male’ CVs garnered more praise and were more likely to be hired to these lab manager positions. Now, of course the CVs were identical,” Jacobs said.

It did not stop there, as the male applicants were also offered greater career mentoring and a higher starting salary. How could this have happened to identical applicants with the exception of the only difference of a male or female name?

“It’s these biases that exist at every stage of the game. It makes it way more difficult for a woman to succeed in an already hypercompetitive world — not because she’s not worthy, but because the chips are just stacked against her,” Jacobs went on.

It raises the question: Where are our women and why is there not an even distribution in S.T.E.M.? It is a deep question society must ask itself. Perhaps the answer may lie in how children are raised. When it comes to this, there is no doubt a difference that gender plays in the psychology of youth.

Jacobs expressed her own frustrations from one experience she had with her young daughter in a toy store in Boston.

Jacobs recounted, “I was floored at what I saw — shirts that said ‘I’m A Princess’ were on one side and ‘I’m A Genius’ on the other side [for boys]. And actually my small moment of anarchy was just to take a rack of those clothes and just swap them.”

Gender stereotypes such as these can profoundly shape the course of a young girl’s life if she believes that she doesn’t have the capability to study math and science due to a lack of intelligence.

Interestingly, in one study by Lin Bian, a psychologist at Cornell University, children between the ages of five and seven were told to point to who they thought was more intelligent, a man or a woman. At the age of five, the children tended to point to their own sex but the six- and seven-year old girls were more likely to point to the man.

While it is unclear why this shift happens, the same study also found that girls who thought that men were smarter began avoiding games that are described as being for “really smart kids.” Potentially, it is “those internal biases that we have that affect children’s choices and it can all propagate from if girls opt out of taking robotics classes or playing math games. These things can just grow with time,” Jacobs said.

Gender stereotypes such as these can profoundly shape the course of a young girl’s life if she believes that she doesn’t have the capability to study math and science due to a lack of intelligence. In a traditional upbringing, girls are often conditioned to be submissive.

“You say ‘yes,’ ‘please’ and ‘thank you,’ you have good manners, you don’t question authority, you don’t develop a healthy skepticism and that’s what science requires,” Jacobs mused.

She went on to add another interesting point, “You have to be willing to read an article and tear it apart, talk about what was good but also recognize what was bad and I think there is a certain sort of hubris involved with being able to do that.”

So how could underrepresentation of women affect science and neuroscience? “Even within the disciplines themselves, the questions that we ask don’t serve women equally,” Jacobs said.

She shared a personal example of her quest to study the effects of menopause on the neurology of brain aging that, “as it turns out, [shape] the brain in these really interesting ways.”

Menopause is an event where a woman’s hormones change as she stops menstruating, usually between the ages of 45 and 55. It is often a huge transition in a woman’s life. Previously, no one had made the connection that it may play a role in Alzheimer’s, a disease in which a disproportionate number of the patients are women.

“Why is it 2020 and we are just now getting a handle on how there may be sex-specific trajectories on how the brain ages and [how] that can be really important for understanding why, for example, two-thirds of the Alzheimers disease patients are women? … It comes down to who’s asking the questions,” Jacobs stated.

There are other pivotal cases of the impact gender can have on science. For instance, rodents are often used in research to model the human body and can be noted as another glaring example of how gender has negatively impacted the discoveries of science. Until the work of Annaliese Beery, who reported in 2010 that male animals were predominantly used in neuroscience research, “it was assumed that, due to the menstrual cycle, females were too ‘variable.’ But that was an empirical assumption that never went tested until a follow-up study by Brian Prendergast,” Jacobs stated.

In the end, the study proved that this assumption was, in fact, wrong. “It just goes to show you that we have these cultural assumptions, like that the menstrual cycle makes women ‘crazy’ and it makes us all ‘variable.’ That is not actually true and you have to test your assumptions,” Jacobs explained.

Overall, it seems like bad science to neglect data collection on an entire gender, regardless of the variables. Due to Beery’s work, there has been a national movement for government-enforced policy to include female animals in research studies.

Thankfully, the future appears bright for women as more diversity is gained throughout all fields of S.T.E.M., bringing with them new discoveries and innovation.