UC Santa Barbara teaching assistants officially ended their wildcat strike for a cost-of-living-adjustment on Thursday afternoon after announcing that they would be submitting withheld grades from Winter Quarter 2020, according to an email sent to a mailing list of supporters. 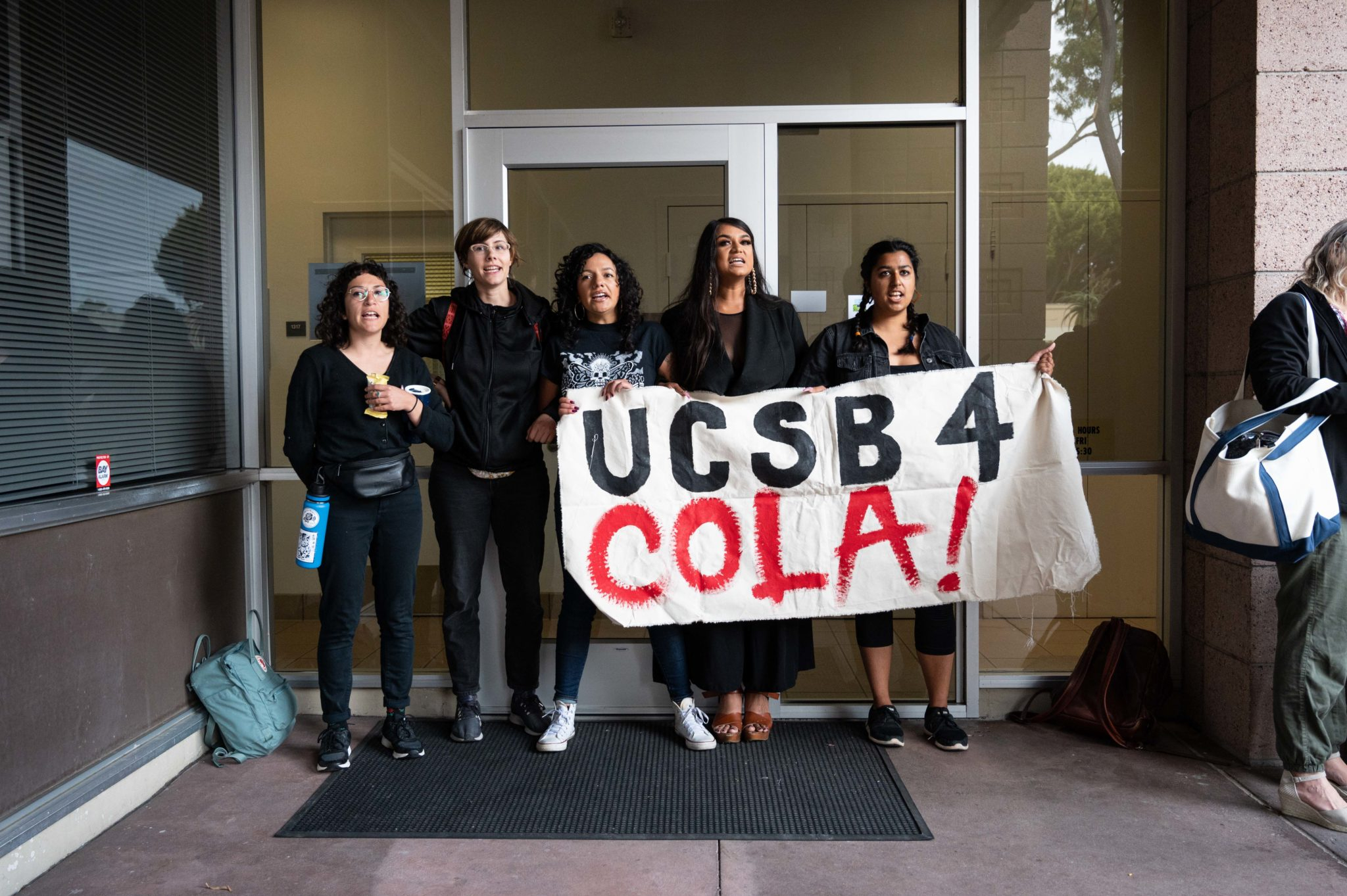 The decision to submit the withheld grades follows that of striking UC Santa Cruz teaching assistants, who announced they would submit fall and winter quarter grades earlier this week.

UCSB teaching assistants started their strike on Feb. 27, halting teaching and grading to advocate for a cost-of-living adjustment (COLA), a monthly stipend of $1,807.51 that would be given to all graduate students to alleviate rising housing costs.

UCSB graduate students were the last of any UC campus to continue withholding grades, with UCSC submitting earlier this week and other campuses like UC San Diego and UC Davis having been forced to submit grades in early April by campus administration under threat of disciplinary action.

The email stated that the COLA movement at UCSB “has been ignored, disrespected, or patronized by an administration hoping this movement will wither and die” and explained that the Dean of Graduate Division wouldn’t negotiate with them and instead suggested they seek support at Counseling & Psychological Services (C.A.P.S.).

UCSB spokesperson Andrea Estrada was not immediately available for comment.

Approximately 50 teaching assistants at UCSB were withholding grades prior to Thursday’s announcement, according to various COLA organizers. Graduate students initially expected this number to be higher, but the coronavirus pandemic and the shift to remote learning meant that teaching assistants who had second and third jobs outside the university were vulnerable to unemployment and were compelled to submit grades to secure their jobs.

“Without foreclosing the withholding of Spring grades, we have made the difficult decision to end our Winter grade strike, and marshal our full strength behind building a union-sanctioned unfair labor practice (ULP) strike,” the email read.

At the end of February, the UC Regents filed an Unfair Labor Practice (ULP), a charge filed to the state when an employer or union violates the National Labor Relations Act. The Regents alleged that United Auto Workers 2865 (UAW) — the union representing UC teaching assistants, readers and tutors — supported wildcat strikes and failed to take action to end the strike, according to the charges.

In response, UAW filed two ULPs against the Regents, alleging that the UC has committed multiple unfair labor practices in its response to the COLA movement, such as failing to negotiate for a COLA with the union and instead bargaining with individual graduate students and groups.

UAW’s bargaining team is in the process of collecting signatures for a ULP strike, which would be similar in nature to the wildcat strikes — teaching assistants would stop instruction and would withhold grades — but because it would be sanctioned by the union, strikers under UAW are guaranteed protections, according to a statement published on April 1 by UCSC COLA.

Included in Thursday’s email is a list of new demands from COLA organizers for Chancellor Henry T. Yang and UCSB administration to address, which includes changing working conditions for graduate students under the coronavirus pandemic and greater transparency on how the $25 million in stimulus money allotted to UCSB by the federal government will be used.

Organizers are “insisting” that some of this money go towards waiving or alleviating rent in UCSB-owned student and family housing, as well as rent assistance for graduate students living off-campus.

The demands also call for a walk-back of all strike-related discipline and a commitment to non-retaliation against all UC wildcats, along with the “reinstatement of fired UCSC graduate student workers for current and future appointments.”

“In adapting to these circumstances, our refocus on alleviating rent and healthcare burden carries on the philosophical core of the COLA demand: that people deserve access to healthcare, housing, and living wages.”

While the COLA movement — both at UCSB and UC-wide —  has ceased grade withholding for the time being, organizers are still moving forward with other actions. On Friday, COLA organizers UC-wide held a one-day general strike for International Workers’ Day against unsafe working conditions brought on by the coronavirus.

Organizers also wrote that the movement continues in a variety of formats online, and that it will continue in person once campuses are re-opened.

“When the pandemic passes and our campus reopens (and both these events will occur), we do not intend to return to business as usual,” the email read.

Correction [5/02/2020, 10:05 p.m.]: A previous version of this article stated that UAW would not vote to strike until they reach 5,000 signatures on their strike pledge. This article has been corrected to state that the UAW bargaining team may call a strike vote at any time.

This is still a thing? Wait.. what was this again?

Thank goodness. Considering the distress that students face due to the pandemic, I’m surprised some teaching assistants continued to withhold grades for so long. Additionally, having one of the highest unemployment rates in US history currently, I am very grateful for UCSB securing jobs for us. I know many others that just don’t have this luxury.

Great try for justice. The haters below would be great for prison guards. Or Nazi stenographers.

The schadenfreude business never has a recession. The bastards don’t think of siding
with the weak exploited party, only with the rich fascisti who run the school.

Wow very quickly devolving the discussion into Nazi because they don’t agree with you. You weaken the horrible evil the Nazis committed – the genocide-murder-was unseen in human history and compare it to people signing a contract for a secondary degree for free and get some wages albeit not much. Good job you got shock value from your comment and no substance. You are the problem seeing only evil in those that disagree with you. Your lack of perception about the reality of situations and views are disgusting