The Daily Nexus
Nexustentialism
It's satire, stupid.
Local Bro Thinks the Ratio at His Childhood Home “Blows”
May 1, 2020 at 4:20 pm by Kian Karamdashti 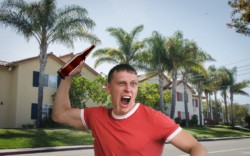 While much of the world struggles to respond as COVID-19 continues to spread across the globe, a crisis is brewing among those who ventured home to wait out the quarantine.

“Oh man, this shit is dry as fuck,” Chad Brohanski said. “I was expecting Deltopia ragers with absolute baddies, and now, I’m stuck at home sleeping till 4 p.m.”

While many students have expectedly felt a sense of sorrow at the in-person cancellation of Spring Quarter 2020, some members of the local Isla Vista population are certainly taking it harder than others. A specific group of people who are struggling are, namely, the “Bros.”

“My mom has no White Claws in the freezer, my little brother isn’t actually a chiller and on the off chance that someone here actually tosses, they all toss low,” Brohanski said. “What is this shit? Every time I make a misogynistic comment, instead of laughs, I get reprimanded by my mom.”

See, this special population had become especially accustomed to their prior living environment — an environment with no rules, minimal restrictions and maximum heinousness. Not only have these Bros struggled to assimilate to their new environment, but their families are struggling to see their beautiful boys turn into the monsters they’ve become.

“He was such a sweet, innocent boy. Now he just comes home talking about how much he pulls and how many Nattys he can crush,” said Becky, Brohanski’s mother. “The other day, I even heard him tell the family dog that he was ‘being a little bitch.’ He’s a menace. Who tells their mother that the ratio at their own family home ‘fucking blows?’ Who does that?”

Brohanski did not deny these claims.

“In my defense, he was being a little bitch.”

Only time will truly tell how much more both parties can take in this conflict.

“No one here is checked in. No one here is ready to rip. No one here wants to rage,” Brohanski said. “I am going to lose my mind if my dad doesn’t shotgun this Four Loko with me when I go downstairs. It’s time to rally.”

Kian Karamdashti shamelessly admits that he doesn’t make his bed in Isla Vista or at his childhood home.