The constant influx of coronavirus updates across the internet was broken up by Bernie Sanders’ announcement of his dropout from the presidential race. For so many Democrats, myself included, Sanders was a light in the dark tunnel in which we have been living  for the past four years. His policy proposals were progressive and considerate of the less fortunate in our country. Having ended his campaign, the Democratic National Committee’s presidential bid will go to his last standing opponent: Joe Biden. 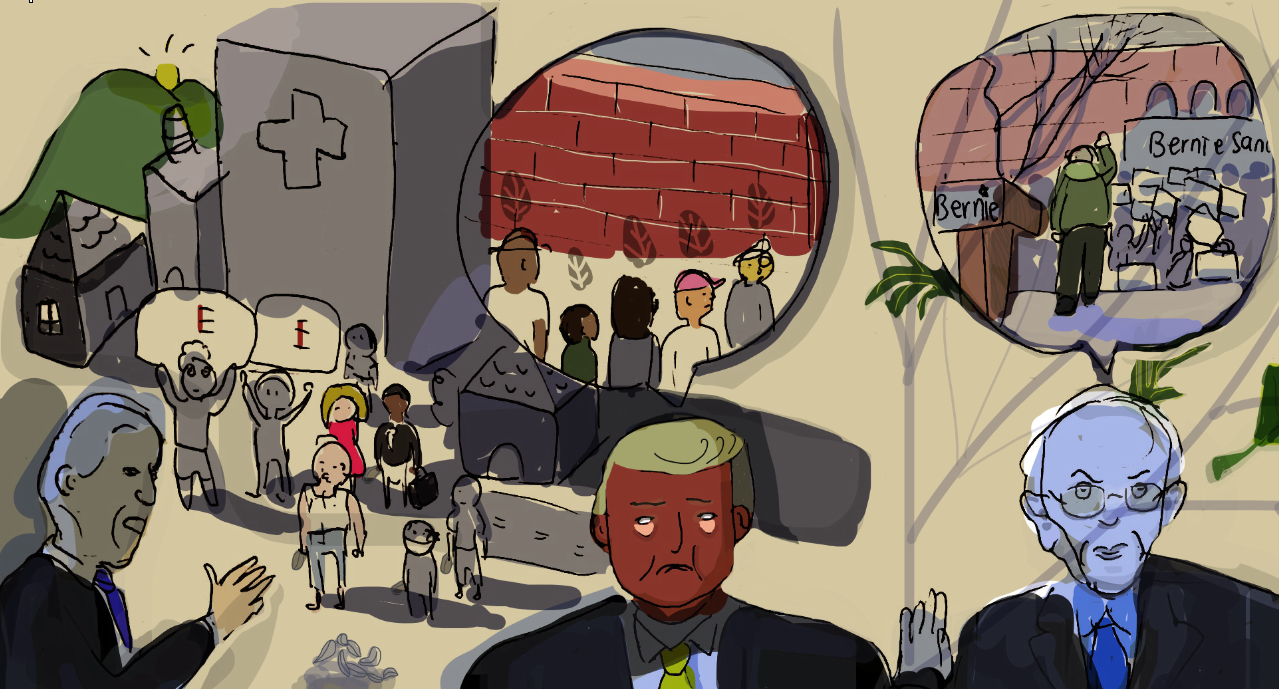 This change in course feels highly akin to the results of the 2016 race for the Democratic primary. When Sanders ended his campaign, it was unlikely that he could have taken the nomination, being that he was so far behind Biden in the vote count. Sanders has maintained similar stances through both the 2016 and 2020 presidential elections, which many considered far too “radical.” Undoubtedly, many Democrats were fearful that in the general election, voters would be hesitant to embrace his ideas. On the other hand, Biden, like Hillary Clinton in 2016, is a far more moderate candidate, making him an appealing choice for a wider range of voters and the Democratic National Committee itself. Consequently, some Sanders supporters are reluctant to grant their vote to Biden.

Sanders’ demographic is primarily young people, many of whom have taken to the internet to express their frustration in the wake of his decision. They have coined the phrase “Bernie or Bust” to express their refusal to vote for Biden in the general presidential election. Some of these supporters have stated that they will not be voting in the election at all, or that they will be writing Sanders on the ballot instead.

As much as I stand for Sanders’ positions, this is an irresponsible use of one’s right to vote. Once again, we find ourselves set to watch a battle between two nonoptimal old white men. The position we have been put in — forced to choose the lesser of two evils — is far from ideal. Nevertheless, this is the reality we find ourselves in, and we must use our votes wisely despite the circumstances.

Many of us may wonder what the effect of our vote even is, since we live in the blue state of California. This is not a swing state, and because of the electoral college, it can be assumed that California will go to whoever the Democratic nominee is. However, your vote is still needed. Safe states haven’t always been safe states: The position of the state either changes or stays the same through the votes of individuals.

In the 2016 election, we saw a battle between the popular vote and the electoral college. The people chose Clinton, and the system chose Donald Trump. This is definitely a testament to the corruption inherent in our system. Without the quantity of individual voters, this corruption wouldn’t have been exposed. More so, if you don’t go to the polls in November, your vote for local positions and propositions will also go unconsidered. If anything, you should feel a stronger desire to vote in local elections, as the outcome of these elections will impact you more directly.

While Biden doesn’t hold the same policy views as Sanders, let’s have a look at how they compare to Trump’s.

Following Sanders’ announcement, Biden took to the stage and addressed Sanders supporters. He assured us, “I see you, I hear you, and I understand the urgency of what it is we have to get done in this country.” This may seem unconvincing to many of us, but Sanders himself has endorsed his former competitor. In a joint livestream appearance, he said to Biden, “We need you in the White House. And I will do all that I can to see that that happens.” Following Sanders’ endorsement came the endorsements of former President Barack Obama and previous candidate Elizabeth Warren. The fact that these figures have turned their support toward Biden enhances the importance of our support to Biden.

This being said, I find a “blue no matter who” mindset to be an ignorant one. There is much more to consider about a candidate than simply the political party they identify with. It is important to research candidates and be clear about their stance on different issues. Just because someone identifies with a certain party doesn’t mean that their views or voting record align with said party.

However, what I do want to stress is the importance of your vote. A vote for Biden is not only that, but it is also a vote against Trump. Many of us believe that Trump’s position in the White House has been a major step in the wrong direction for our country. Sanders’ proposals of Medicare for All, cancellation of college debt and the Green New Deal gave us hope for the future. We must continue to fight for these progressive causes. While Biden doesn’t hold the same policy views as Sanders, let’s have a look at how they compare to Trump’s.

Biden’s campaign prioritizes healthcare, environmental issues and the economy. He proposes to protect the Affordable Care Act and lower the age of eligibility for Medicare. As for the environmental crisis, Biden promises that he will lead our country toward net-zero emissions by 2050. Biden favors an increase of the federal minimum wage to $15 an hour and an overall strengthening of support for the middle working class. Comparatively, Trump has been working to repeal Obamacare, leading to an increasing number of uninsured Americans. He has pulled our country out of the Paris Climate Agreement, with the intent to continue drilling and rescind the Clean Power Plan. Trump has decreased unemployment, which still stands high, but tax cuts for the upper class have affected the country elsewhere — for example, bringing about the increase in uninsured Americans. Trump has prioritized the 1%. Biden’s policies are not as progressive as Sanders’. They are, however, monumentally better than Trump’s.

We needn’t give up on the things that Sanders promised us; we can continue to strive for the implementation of those policies. Biden gives us the best possible chance for these desired changes to come to fruition. As we move closer to the November election, I ask you to take this into consideration. Your right to vote is one of the privileges of living in a democratic society. Use it wisely. It’s Biden or Bust.

Sophia Lovell implores you to consider the importance of your vote.

Imagine voting for a rapist.

Wait until you get older and are making a six figure income. You will see why “progressive” is a silly concept for lazy people and hurts those who choose to work for a living.

I’m 22 and I see this. Granted my family and I aren’t making 6 figure incomes yet we still have to pay so much in taxes for people in my hometown who I know literally choose only to work for a short period of time during the year so that they can get a huge tax return, while my family and I continue to bust our asses day and night… One of the reasons why why this whole progressive thing does not work for me

I have a simple purity test, I will not vote for a rapist. Unfortunately, Biden doesn’t pass this test. I don’t think its an unreasonable ask

your purity test= bull shit
A Biden has been accused of sexual assault not rape.
B Even his accuser said she would vote for him
C you live in a fantasy land where you only get to make good decision but life is messy and you make the best one available.

D. Not voting increases the likely hood of the greater evil in Trump

A. Sure, there’s a meaningful difference, but I wouldn’t vote for someone who committed aggravated battery even if they didn’t commit murder. These allegations, if true, ought to be disqualifying for someone who wants to be President, ESPECIALLY if that person is attempting to secure the Democratic nomination in the post-Me Too era. B. Not entirely sure that point is relevant, but interesting nonetheless. C. If my choice is between someone who committed murder and someone who merely committed aggravated battery, I’m writing in John Kasich. If I believe that the allegations against both candidates are true, neither Trump nor… Read more »

You live in a fantasy world of only perfect choices but welcome to the real world. You are so stuck on partisan ship Democrat vs Republican and having a perfect ideal candidate you are willing to throw away your future and mine for a What you think is a principled stance but is just selfish. Moderates like you led to Clinton losing and she was horrible but better than the alternative by throwing away voted and not picking the obviously better choice over some b.s. Purity test

Trump didn’t decrease unemployment in the last two months because he blew off covid-19 until mid-March. Not voting for Biden means you’re cool with that guy being in charge for another four years.

This is completely true! Not voting is absurd and although Biden was not my first choice (or 2nd or 3rd…) he would always be better than 4 more years of this.

Yeah fuck this. I’d never ever vote for Joe.

That presumes that Joe is the only option Democrats have. The convention hasn’t happened yet, the party could collectively decide that their principles do matter and pick a Cuomo, Whitmer, or Harris to fill the role. This is why the parties used to pick candidates internally – the only people forcing Joe to be the nominee is Joe himself and the party’s senior leadership. There won’t be any riots in the streets if Democrats pick anyone as-or-more liberal than Jeb Bush to be their nominee, Joe Biden has a fraction of a passionate voter base as even Hillary Clinton!

Yes your comment is technically true but yet completely useless and point less. Really you think any those people could win? At this point switching to some one else would be anything but a clusterfuck guaranteeing Trump for four more.