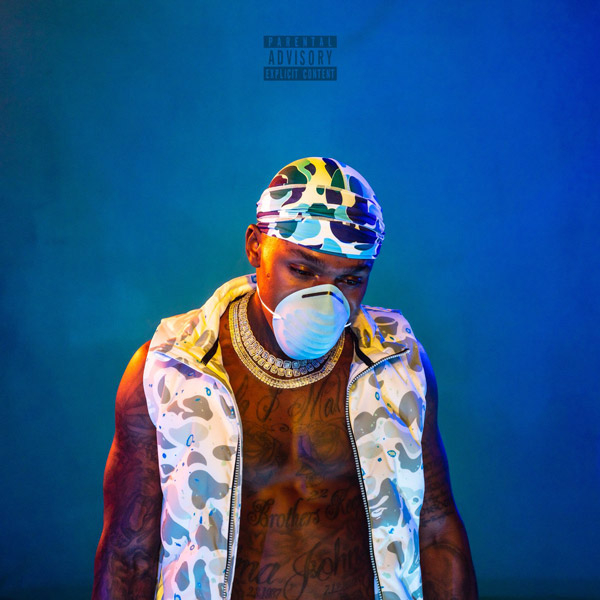 North Carolina rapper DaBaby returned with his third full-length project, “BLAME IT ON BABY,” 13 months after dropping two of the most exciting albums of 2019. In an era of hip-hop in which mumble rapping over a generically explosive beat is increasingly substituted for lyrical flow, DaBaby’s debut album, “Baby On Baby” was an exhilarating show of creative wordplay and animated delivery. Three albums and a surfeit of guest verses later, the very same hooks and ad-libs that enthralled his fans are starting to feel unoriginal and played out.

“BLAME IT ON BABY” sees DaBaby try to emulate the success he found with his first two projects by leaning on his signature aggressive vocals and sardonic flow while offering little in the way of an artistic gamble. On “LIGHTSKIN SH*T,” DaBaby recycles material with verses, that, in all likelihood, may not have made it onto his last album as he raps: “My bitch like a model/Where the genie? She shaped like a bottle/Fuck a IG, she too fine to follow.”

On the couple tracks where he attempts to transition into a singing rapper (“FIND MY WAY” and the Roddy Ricch-assisted “ROCKSTAR”), DaBaby seems to hold himself back from delving beneath the surface of his lifestyle as one of the most in-demand rappers in the game. Although those who don’t listen closely enough may find themselves deceived by the acoustic-driven melodies and more mild vocals, the fact remains that every single song, these two included, are driven by his braggadocio surrounding women, wealth and weapons.

“CAN’T STOP” and “NASTY” do their part in keeping the album from dissolving into the vortex of unremarkable rap projects. The former track reaffirms DaBaby as one of the few prolific rappers who still considers lyricism to be relevant in the formula for a hit record and offers the most memorable line of the album: “Bitch, you know I turn piss into lemonade/ Turn shit into sugar, that’s chocolate pudding.” The latter track features an impressive hook from Ashanti and an incendiary verse from Megan Thee Stallion; both ladies outshine DaBaby, leaving listeners wondering who the featured artist really is.

DaBaby has become such a mainstay in hip-hop that it is hard to believe his debut album was released only a little over a year ago. His comedic one-liners are refreshing in a genre that often takes itself too seriously, and his charisma and unwavering confidence make it very hard to dislike him. The “Suge” rapper is also no stranger to controversy. In 2018, he was involved in a shootout in which a 19-year-old man was killed and more recently came under fire for slapping a fan at his Tampa concert.

Through it all, DaBaby has remained unrepentant for his actions, often drawing from his contentious narrative for new material. On “BLAME IT ON BABY,” he boasts that “Ya favorite rapper say he fuckin’ with Baby, somebody lied/Play with ya kids, ‘cause the last n**** played me, somebody died.” DaBaby has perfected the unaffected persona of a rapper who knows he’s on top, but fans searching for any real sentiment on this album are sure to be disappointed.

For the record, DaBaby hears the criticism against his rhymes loud and clear. “As far as, like, switching the flow or anything like that, I have no problem rapping circles around any one of these n****s,” he asserted on The Breakfast Club. “I’ll make a conscious album right now … at the end of the day … you gotta milk the game. You gotta take advantage of it. I switch it too quick, you ain’t gonna like it.”

On “BOP,” a single from his previous album “KIRK” and his biggest song to date, DaBaby asks himself the question on everybody’s mind: “Ayy, when you gon’ switch the flow? I thought you’d never ask.” The answer to that question does not lie within this album, and fans and critics alike will be sure to “BLAME IT ON BABY.”