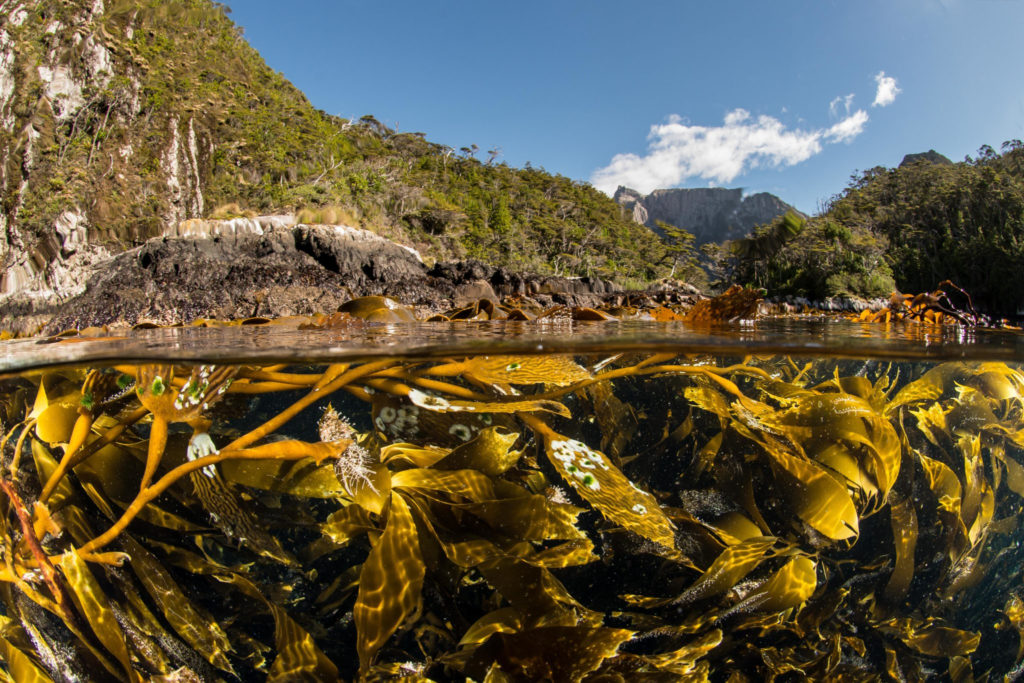 As the southernmost kelp forest in the world, this ecosystem is geographically isolated and difficult to access, making it relatively unaffected by human activities. Courtesy of Enric Sala

In southern South America, there exists largely undisturbed giant kelp forests. As the southernmost kelp forest in the world, this ecosystem is geographically isolated and difficult to access, making it relatively unaffected by human activities.

While losses of kelp forests are occurring in a swiftly warming ocean, these changes are spatially variable. Studying kelp forests in different regions can help researchers better understand how they function and how to improve their conservation. In particular, studying kelp forests in remote areas could allow investigators to tease apart human impacts from natural changes. This can improve understanding of human influences on local ecosystems.

Researchers, including some from UC Santa Barbara, collaborated on an international study to compare conditions of the kelp forests at the southern tip of South America 45 years apart. The paper is published in PLOS One.

In 2018, the Southern American kelp forests were resurveyed as part of National Geographic’s Pristine Seas project to study ecosystems in areas with low anthropogenic impacts. It was the first long-time examination of kelp forests in this region. Paul Dayton from UC San Diego’s Scripps Institution of Oceanography was involved in both studies.

“We wanted to follow up on [Dayton’s] extensive notes, which he took, and records to see whether or not the kelp forest community and the kelp forests in general had changed over the last 45 years,” said Tom Bell, a project scientist at UCSB’s Earth Research Institute and co-author of the paper.

Bell and his colleagues used the Landsat satellite imagery that was available starting in 1998 to analyze how kelp canopy density may have changed over a 20-year period. They saw no significant difference in density between then and now. However, they did notice that the kelp density dynamics were based on roughly four-year cycles which appear to be negatively correlated to the El Niño–Southern Oscillation (ENSO) index, during which tropical eastern Pacific Ocean sea surface temperatures warmer.

“We found that the kelp density kind of follows those climate cycles, which are mostly natural cycles … When the El Niño–Southern Oscillation index is high, it usually means warmer waters with less nutrients,” Bell said.

During the ENSO period, the southern Argentinean kelp canopies typically have reduced density. This pattern is seen in Californian kelp forests as well, according to Bell.

The researchers examined the kelp forest communities in the remote region. Courtesy of Manu San Félix

The scientists also conducted diver surveys to gather information about the kelp forest’s benthic communities and fish assemblages. Their data showed that the kelp forest ecosystem did not experience many changes over the past 45 years, which Bell called “encouraging.” The relative abundance and assemblage structure of sea urchins, and the abundance of kelp and sea stars remained similar.

“We have seen climate change negatively affect kelp systems in some parts of the world, like off the coast of Australia and New Zealand. However, we did not find that here,” Bell stated.

According to Bell, a lack of direct anthropogenic stressors in this largely isolated region may have allowed conditions of the kelp forests to keep “fairly stable” during the study period, despite the near four-year ENSO oscillations.

“[These climate cycles] should be studied more closely before we look at global dynamics of kelp from one time point to the next,” Bell remarked. “If the team had gone down there in two years, like two years from now or if they were down there right now, they might see a completely different picture of the kelp forest and would have surmised that the kelp has declined a lot in the last 45 years.”

But through using Landsat imagery, the group could obtain a time series of the kelp canopy even when it might have been difficult to dive for measurements.

“That allowed us to see these oscillatory cycles of the kelp forests that we wouldn’t have seen normally,” Bell said. “I think that it really shows the power of using remote sensing to generate a continuous time series of data to really understand the system.”

Although ocean temperatures in this region are predicted to increase more slowly than in other areas, other factors,such as the possibility of kelp harvesting, will likely have eventual impacts. In their paper, the researchers propose creating a marine protection network in this region to conserve its biodiversity and ecosystem services.

The scientists will continue to monitor and amass data for kelp forests. Bell stresses the importance of projects like this to study areas around the globe for greater understanding of our ecosystems.

Backed by The Nature Conservancy, he is working on building a global dataset of canopy-forming kelp species to assemble a time series of 20 or more years for kelp forests in different regions around the world.

“We can better understand how these changes in ocean dynamics control these systems and identify areas where we would expect that anthropogenic impacts have changed kelp forests,” Bell said.