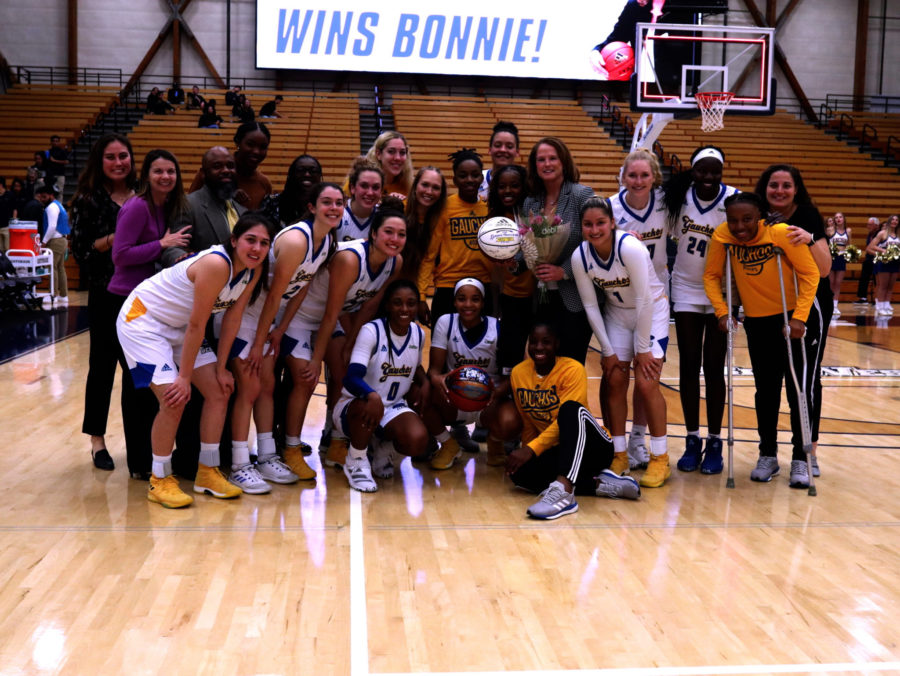 The day before a game, the UC Santa Barbara women’s basketball team always gathers to watch film on the upcoming opponent. Before its first 29 games, the team identified strengths and weaknesses of the opposing team, running through the game plan to make sure everyone understood their responsibilities.

March 12 — the day before the team’s 30th game — was no exception. The Gauchos gathered in an Anaheim conference room to scout out their Big West Conference Tournament semifinal opponent: Hawai’i. Just eight days earlier, the two teams faced off in a dramatic, nail-biting affair, with junior point guard Danae Miller’s buzzer-beater giving the Gauchos the victory — as well as the second seed in the conference tournament.

But by the time Head Coach Bonnie Henrickson and her coaching staff entered the room, it was clear the team had more to talk about than the Rainbow Wahine.

“We were in contact with our administration, and we actually moved film back to 10:15 because conference officials were meeting at 10,” Henrickson said. “We already knew the games were going to have no fans, but all morning I watched on my phone as the Big 12, Big Ten and ACC cancelled their tournaments, thinking we were likely next.”

Sure enough, Big West Conference officials made the decision to cancel the tournament at the 10 o’clock meeting, leaving Henrickson with the unenviable task of communicating that decision to the team.

“For us, it was a combination of easing their fears as much as we could, before quickly turning it around and talking about what a great finish we had and how important the seniors were,” Henrickson said. “It was what we would normally say after the last game in a locker room, not necessarily in a room getting ready to play.”

Understandably, the room was emotional. After winning five of their last six games, there was a real belief within the team that they could make a deep postseason run. For seniors Coco Miller, Tal Sahar and Celeste Salazar, their collegiate basketball careers were over without any warning.

“It was definitely disappointing once when we officially heard the news,” Coco Miller said. “We finished in second place in conference this year, giving us two byes in the tournament, which was the best finish that the team has had in my five years of being here, so that was really exciting. We had a lot of momentum going into the tournament and we were ready to make it to the NCAA tournament this year.”

Later that day, the NCAA officially announced the cancellation of the 2020 women’s basketball tournament.

Despite the sudden ending, the UCSB women’s basketball team has plenty to be proud of this season.

After slumping to an eighth-place finish in the Big West last season, the Gauchos were tipped to finish dead last this year in the media preseason poll.

Instead, UCSB turned in one of its finest seasons in recent memory, finishing the season with a 9-7 conference record — good for a tie with Hawai’i for second place in the conference.

On paper, there didn’t seem to be much separating this year’s squad from last year’s, save for the addition of two freshmen. But one of those freshmen — 6’4’’ forward-center Ila Lane — would go on to have arguably the most impressive freshman year in the history of the program.

In her collegiate debut, Lane chipped in 15 points to help lead the ‘Chos to an opening day victory over Utah Valley. In her third game, Lane recorded a 10-point, 16-rebound double-double — the first of the 19 total double-doubles she would record this year.

In total, Lane averaged 15.3 points per game while shooting 57.6% from the floor. On the boards, however, Lane put up even flashier numbers, leading the entire nation with her 13 rebounds per game.

“We knew coming into the season that [Lane] had the physical attributes to be special,” Henrickson said. “She didn’t have a lot of bad habits in high school, so she got better fast. She has high expectations of herself, she’s committed to doing the work and she doesn’t want to disappoint her teammates and coaches. You put all of that in a bottle and shake it up — that’s special.”

At the end of the season, Lane earned the accolades to prove just how special her season was. When Lane was named to the Associated Press (AP) All-American Honorable Mention team, she became the fourth student-athlete in program history to be named to an AP All-American team. In addition, Lane was named the Big West Freshman of the Year, as well as a First Team All-Conference member.

As good as Lane was this season, a big can only dominate if she receives good passes into the post. Enter guard Coco Miller — a veteran leader who led the Gauchos in scoring last season with 12.2 points per game.

This year, with better offensive weapons around her, Coco Miller switched into a facilitating role. Coco Miller led the team with 4.1 assists per game and finished ninth in the country with a 2.78 assist-to-turnover ratio. A bit of a swiss-army knife, Coco Miller also led the team with 2.1 steals per games despite frequently guarding the opposing teams’ best players. In a particularly memorable performance against UC Riverside, Coco Miller blanketed First Team All-Conference member Jannon Otto; at halftime, Coco Miller had more steals (5) than Otto had points (4).

“[Coco] checks a lot of boxes for us,” Henrickson said. “Her post-passing, her consistency — it’s going to be very odd to start next year without her.”

Inconsistent performances plagued UCSB at the beginning of conference play; after five games, Santa Barbara found itself in seventh place with a 2-3 record.

But every time the Gauchos’ season threatened to go off the rails, a different player seemed to step up and provide exactly the spark the team needed — especially on the road.

In Fullerton, with Lane deep into foul trouble, sophomore Megan Ormiston provided 13 points off the bench, shooting an efficient 6-7 from the floor.

At CSUN, with the team struggling mightily on offense for most of the night, guard Sahar scored 9 fourth-quarter points to spark a late-game run.

And, of course, there was Danae Miller’s game-winner in Hawaii — a difficult shot that underscored just how much the team was rolling to end the season.

“We persevered and never let the losses go to our heart and the wins go to our head,” Henrickson said. “It was an incredibly unselfish and humble group that really figured out why we were winning and how to win.”

That shot, unfortunately, would be the final shot any Gaucho player took this season.

Alongside Lane’s accolades, both Coco Miller and Danae Miller were named to the All-Big West Honorable Mention team. In addition to her late game heroics, Danae Miller finished 10th in the conference with 13.3 points per game during conference play.

Still, for Henrickson, there will always be a question mark over this season, a pondering over what could have been with this group. Before the team traveled down to Anaheim for the conference tournament, Henrickson had already asked around to see where the team would potentially be seeded on selection Monday if they won the tournament. It wasn’t cocky — there was a real belief within the team that this could be the year they made a run.

“It’s heartbreaking for the seniors, but it’s the right decision in the grand scheme of things,” Henrickson said. “It’s basketball games, not lives.”

Unknowingly, that Hawai’i game would be the last ever collegiate game for Coco Miller, Sahar and forward Salazar. While Coco Miller expressed her disappointment with the outcome, she found a sense of closure in the way the season ended.

“Although I was disappointed the way it ended, once I came to terms with our season being over and not going to the tournament, I realized that we were kind of lucky the way it ended,” Coco Miller said. “Most teams end their seasons with a loss, whether you lose in the Big West Tournament or the NCAA tournament, but because we didn’t have the opportunity to play in either, we ended our season with two big conference wins. Both of the games I was surrounded by family and friends so I ended my career with the memories of those wins.”