I never understood the power of an email until now.

Even as COVID-19 spread across the globe, the word “pandemic” seemed like a faraway concept. I heard about the growing death toll and rising numbers of contracted cases every day, but none of it felt real. I never imagined it would touch the United States so widely, until it did. I never imagined it would affect our lives at UC Santa Barbara so directly, until Chancellor Henry Yang’s email was sent out Tuesday, March 10.

I remember the exact moment it came. I was sitting in my dorm room worrying about the upcoming finals week, when suddenly my social media went haywire. Everyone was messaging about an email Chancellor Yang had sent informing us that the rest of winter quarter, and the beginning of spring quarter, would be online. The entire university went into a state of panic. 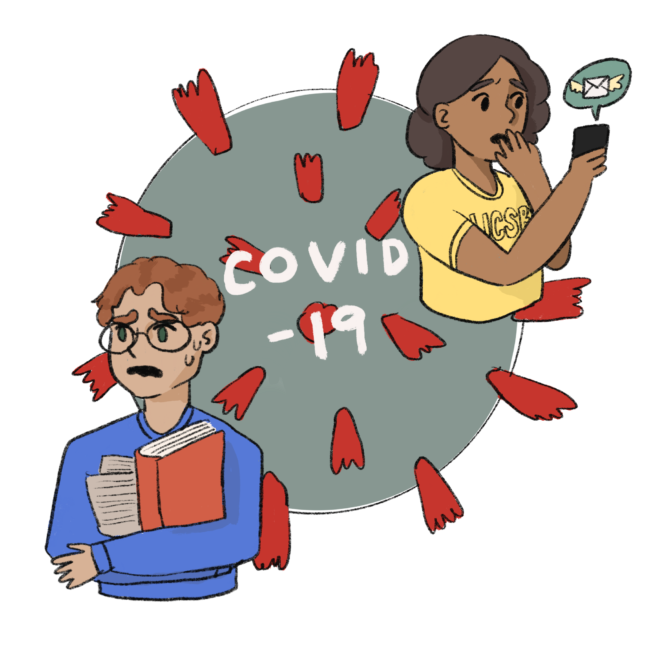 No one knew what to do; I had never contemplated that our college would be among the ones to shut down in-person instruction. At the beginning we were only told to stay away until the end of April. The thought of leaving the campus even for a month was crushing.

While UCSB attempted to handle the situation as swiftly as possible, I believe they could have approached the circumstance with more clarity and guidance. With every email, students received overwhelming new information, and were often left confused about the next course of action.

Professors, just as jarred by this news as we were, scrambled to rework their remaining lectures and final exams. The decision was necessary for ensuring our school’s safety, but because professors had no preparation, there was a lack of consensus across different departments.

In the following days, students received a flurry of emails from the university and professors, all taking various approaches to the upcoming finals week. While some teachers canceled their finals altogether, depriving students of a chance to improve their grades, others insisted on offering an in-person final.

This disparity resulted in some students receiving generous curves and early endings to their quarter while others were mandated to remain on campus for rounds of testing amidst the chaos. One freshman, Rachel Lam, devoted all her time and energy to studying for a chemistry final she was obligated to take on campus a week after the Chancellor’s email was released.The lack of consistency regarding testing policies left students like Lam in a hectic state as they struggled to juggle all the new changes. In the end, her professor cancelled the final, after she had vigorously studied days before.

What this virus has shown us is how unprepared universities are for mass crises. Each email left students more and more baffled about how to proceed when deciding whether to go home or remain on campus. On top of all this confusion, students had to take on the daunting task of completing papers and final tests in the midst of the mental and emotional strain caused by a worldwide emergency.

What this virus has shown us is how unprepared universities are for mass crises.

While professors began changing their plans to cater to the university’s instructions, another major problem arose. The housing situation proved to be the most difficult problem of them all. As a freshman at UCSB, I resided in Santa Cruz Residence Hall. Students living in the dorms had no clue whether to move out for the month of April or plan to continue staying on campus. There were plenty of debates over which course of action was the safest and how the residence halls were going to adjust costs for us.

Then, on Saturday March 14, students were informed that remote instruction would be extended indefinitely until the end of spring quarter. Now, everyone living in university housing had only days to permanently move out for the year.

This news came too late for those who had already gone home earlier in the week. The last minute change forced students to return to campus to collect their remaining belongings, potentially exposing more students to the virus, countering the administration’s goal.

Thousands of students departed campus with tears in their eyes. Our time together was being cut short. Many students — especially seniors — were not yet prepared to say goodbye.

While some of the freshman class wanted to argue against the university’s decision to move us all off campus, it was difficult to fight back during this time of confusion and panic. Many worried about their chances of contracting the virus, and what that would mean for their families, to whom they would be coming home.

Now more than ever, we have an opportunity to ask the university for a tuition adjustment. As classes are being held remotely, and students are leaving campus, it is up to undergraduates to demand an appropriate reduction to our fees to reflect the services and resources that will be unavailable during remote instruction.

This year has been very chaotic for UCSB students just trying to receive an education. Many of us are facing a multitude of challenges, as we attempt to find our new sense of normalcy. I encourage all students to not stay silent during this time of need. The university made a commitment to all of us, to help foster our development and success in our education. It is in these situations where their actions will speak louder than words.

Sara Rubin is a strong advocate for social distancing!