The Daily Nexus
News
Should I Stay or Should I Go? UCSB Students Grapple With I.V. Leases After University Recommends Moving Home
March 17, 2020 at 8:59 pm by Evelyn Spence and Sanya Kamidi

Isla Vistans looking to break their leases in light of UC Santa Barbara’s decision to make all spring quarter instruction remote will find it nearly impossible without facing repercussions from their landlords, according to Isla Vista Tenants Union lawyer Robin Unander. 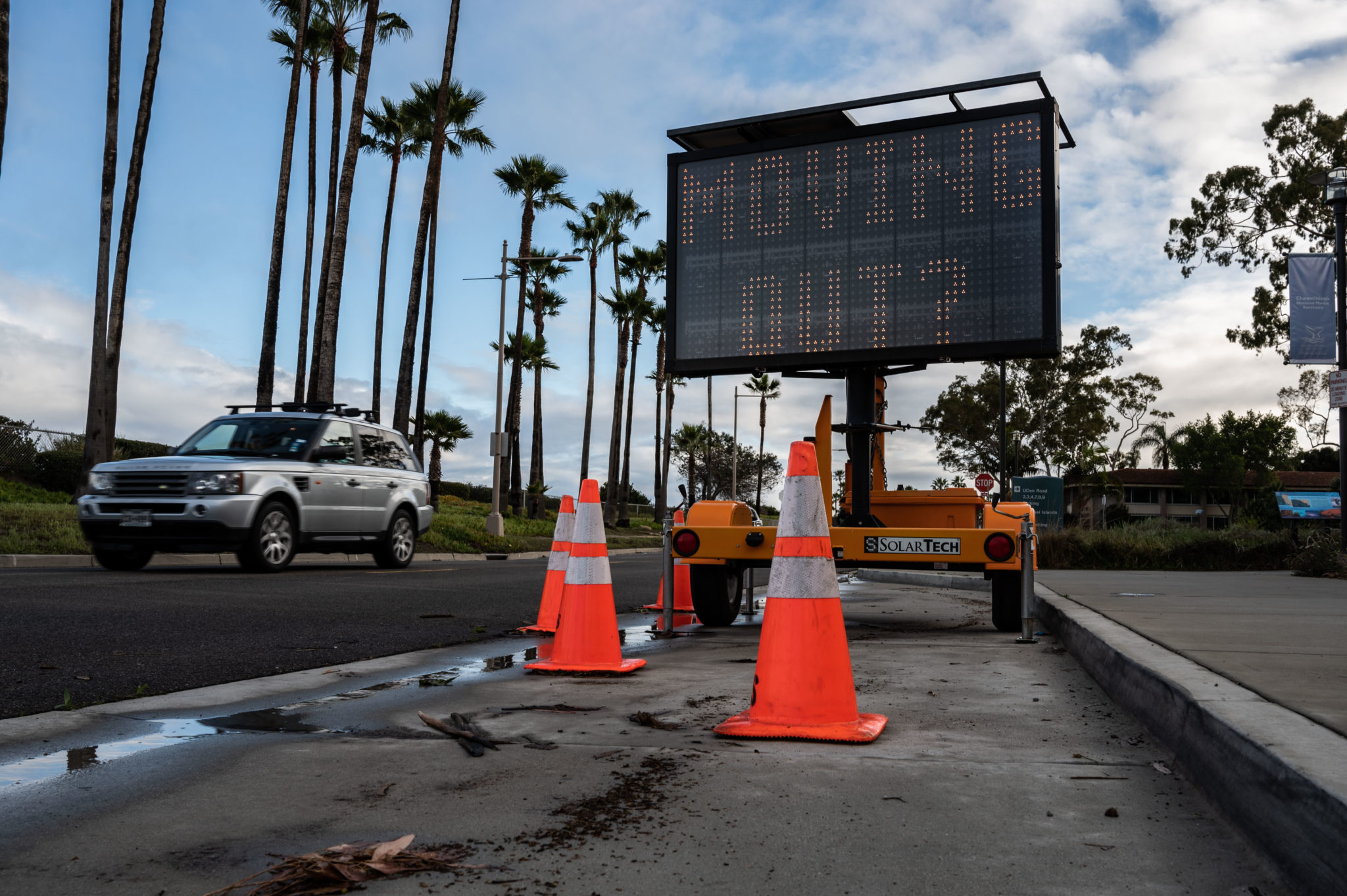 While it may be nearly impossible for I.V. residents to break their leases, UCSB-specific Facebook groups have been flooded with posts from students looking to sublease their rooms for the quarter. Max Abrams / Daily Nexus

Unander — who is working with the university to send a memo to UCSB students about their housing options — said she has primarily seen two legal terms cited online by tenants who are hoping to argue their way out of their leases.

The first is a term called “force majeure,” which allows either a tenant or a landlord to be excused from the leasing agreement if it becomes “physically impossible” to continue the lease due to circumstances that are “not the fault of either party,” Unander wrote in her memo.

Historically, this clause has been used in the event of natural or human-caused disasters such as earthquakes, terrorist attacks or worker strikes, she said.

“[Parents and students] aren’t understanding exactly what they’re reading. Some of it depends on state to state because every state has different laws. This isn’t a federal law. In California, if there’s nothing in your contract that supports, ‘Hey, if there is an act of God situation, then you can excuse yourself from your contract,’ then it doesn’t apply,” Unander said.

The second term Unander said she has seen used is called a breach of habitability, which can be used if the location is unfit for human occupation or affects the safety of the tenants.

But Unander said this term also does not apply because the decision to cancel classes, as well as the spread of the virus, “doesn’t make the house uninhabitable,” even if an Isla Vistan is diagnosed with the virus.

“The water works, the electricity works, the heating works, the lighting works — assuming there are no problems with the apartment to begin with. But otherwise, the fact that they might be self-quarantining or being quarantined does not make the unit uninhabitable,” she said.

While it may be impossible for residents to break their leases, Unander noted that, depending on the specific lease, tenants can find someone to temporarily or permanently take their places, although Unander emphasized that there is a difference between the two.

In a more permanent situation, where a new tenant takes over the lease completely, the original tenant is “assigning” all of their rights and interests to the person taking their place, meaning the security deposit changes hands and the original tenant will no longer have any relationship with the landlord, Unander explained.

I.V. residents must check their leases to see what their landlords’ policies are on allowing replacements, Unander said, adding that landlords have the “absolute right” to say that tenants cannot sublease, or that tenants cannot have someone take their places unless they have the landlord’s written consent.

If tenants leave and refuse to pay their rent, or if they sublease without the landlord’s prior consent, landlords are well within their rights to pursue legal action against the tenant, Unander warned.

She emphasized in the memo that the decision “to not let you out of your lease is not personal or intended to take advantage of the situation.”

“Please keep in mind that most landlords have mortgages and bills to pay arising from your apartment, regardless of whether you are currently occupying it. Most or all cannot afford to cancel your lease and absorb loss of rents,” Unander wrote.

While it may be nearly impossible for I.V. residents to break their leases, UCSB-specific Facebook groups have been flooded with posts from students looking to sublease their rooms for the quarter.

Joana Gutierrez, a third-year history of public policy and feminist studies double major, said she couldn’t justify the cost of rent in I.V. when she had the option to move home.

“If I’m not gonna be here, why am I gonna pay overpriced rent, you know?” she said, adding that she felt like she needed a break from I.V. culture.

“Everybody’s super excited about not having classes face-to-face, but that leads to a lot of binge drinking, and it’s stuff that I’m really trying to stay away from for my mental health,” she said.

While she hasn’t had luck in finding a subleaser yet, Gutierrez said she has mostly been asking her friends who live in university housing, versus looking for someone on social media. Gutierrez added that her roommate also hadn’t found a subleaser but has already gone home and would continue to pay rent through his financial aid refund check.

“A lot of people are probably gonna be doing that, and that’s probably what I’m gonna end up doing if I don’t find a subleaser, but financially, it would be better to find someone,” she said.

Other I.V. residents are planning on staying in Santa Barbara for the duration of the quarter, citing harmful home environments, jobs or other responsibilities in the area.

Justice Dumlao, a fifth-year global studies major and Associated Students (A.S.) senator, said he was staying in I.V. to continue working and to avoid a “toxic” home environment.

“While my job is kind of up in the air, whether it will be completely open or how we can get hours, I just don’t have a job back home and that means I won’t be able to make money to pay my rent,” Dumlao said.

“Additionally, home is just not super healthy,” he said. “The idea of being there for an extended period of time that’s not just a break sounds pretty bad for my mental health.”

Tyler Ferguson, a second-year pre-political science major and another A.S. senator, said that in addition to staying because he was “locked into [his] lease,” he wanted to be able to continue carrying out his senatorial duties and supporting other students staying in I.V.

Ferguson noted that for him, staying in I.V. instead of finding a subleaser — which would require him to pay $500 to his landlord — was the best economic decision.

“I’m also wanting to get a job out here,” he said. “Being low-income, I definitely need work, and back home there’s not really many jobs available.”

Is this UCSB recommendation to residents of their dormitories or to the entire Isla Vista community? Also why would someone move to a “hot” area when there are fewer cases in SB County?

Because the density is too high in IV. Anything that gets started will spread like wildfire.

How would this apply to a lease starting in July for the 20-21 year? We’ve already signed. If the online classes mandate stretches into the fall quarter we won’t need housing in July. I assume we are locked into the upcoming lease as well?

If you can live at home and get your degree online, why wouldn’t you? The landlords aren’t going to have any legal recourse for people breaking their leases. This is not business as usual.

This is incorrect. If they fail to abide by the leasing contract they signed, then their landlord has the right to take action against them. This includes withholding deposit, debt collection, damages to their credit score, and court-ordered garnishing of their wages for years thereafter. Please do not provide false information to these students, the damage you could be causing in their lives is immeasurable. It is best for them to find a legal way to either sever their lease with their landlords approval, or to find someone to take over their spot, again with their landlords approval. Please leave… Read more »

Listen to the lawyers, yeah, that’s working out.

Has Chancellor Yang actually recommended students in IV go home? IMO it has just been to students in campus housing to return home( for IV residents just to social distance), in which case I think this headline is misleading

Reading between the lines, this thing isn’t going away in a couple weeks, this is the new normal. High density student accommodations are no longer a safe way to live.

Already gone. I’d be an idiot if I stayed in IV for a pandemic.

Why is the Isla Vista Tenants Union lawyer taking the side of the landlords. People are dying and this is no time to cram in 3 to a bedroom for beer pong tournaments. Leases are unenforcible under the circumstances. The landlords won’t stand a chance suing students over returning home during a deadly pandemic. Simply move out and stop paying. Worst case you lose your security deposit.

Tbh it doesn’t seem to me like they are. I feel like they just don’t want everyone to get screwed if they bail out and then can get sued or something. I’m glad to know that I can’t actually just leave, was planning on it but would rather not go to court over it

A lawyer representing their clients should provide advice on how to exit the lease. This lawyer isn’t helping.

Most landlords own the home they live in.

Rent strike. Organize all the tenants in your building. Organize all the tenants in all the other buildings the rental company owns. This should happen on campus housing, in Isla Vista, and hopefully throughout the nation. Fight any evictions. Demand arbitration. Demand group arbitration. Threaten class-action lawsuits if your landlord tries to fuck around.

hope you get your credit ruined

Bad credit is the best defense against identity theft and debt peonage. It should be embraced.

hold that thought for your next application to rent

Everyone needs to gtfo. Go home, no one wants you here.

What a crappy article, just tell everyone to obey the slumlords? Go to the media and public shame them for taking advantage of a deadly virus to make money off of broke college students. Go for Bartlien and co first!

I don’t really think they’re taking advantage. Are the grocery stores taking advantage by allowing you to buy canned food? They’re literally just doing their jobs and also have bills and mortgages to pay. I was pissed at first, but i feel like now we’re just being unreasonable. If theres anyone I’m mad at, it’s the government for not helping us pay our rents.

The government does pay student rent with financial aid. Maybe taxpayers should be mad.