The Daily Nexus
Music
White Reaper Wakes Up Santa Barbara With Concert at SOhO
March 10, 2020 at 1:59 pm by Kristina Valencia 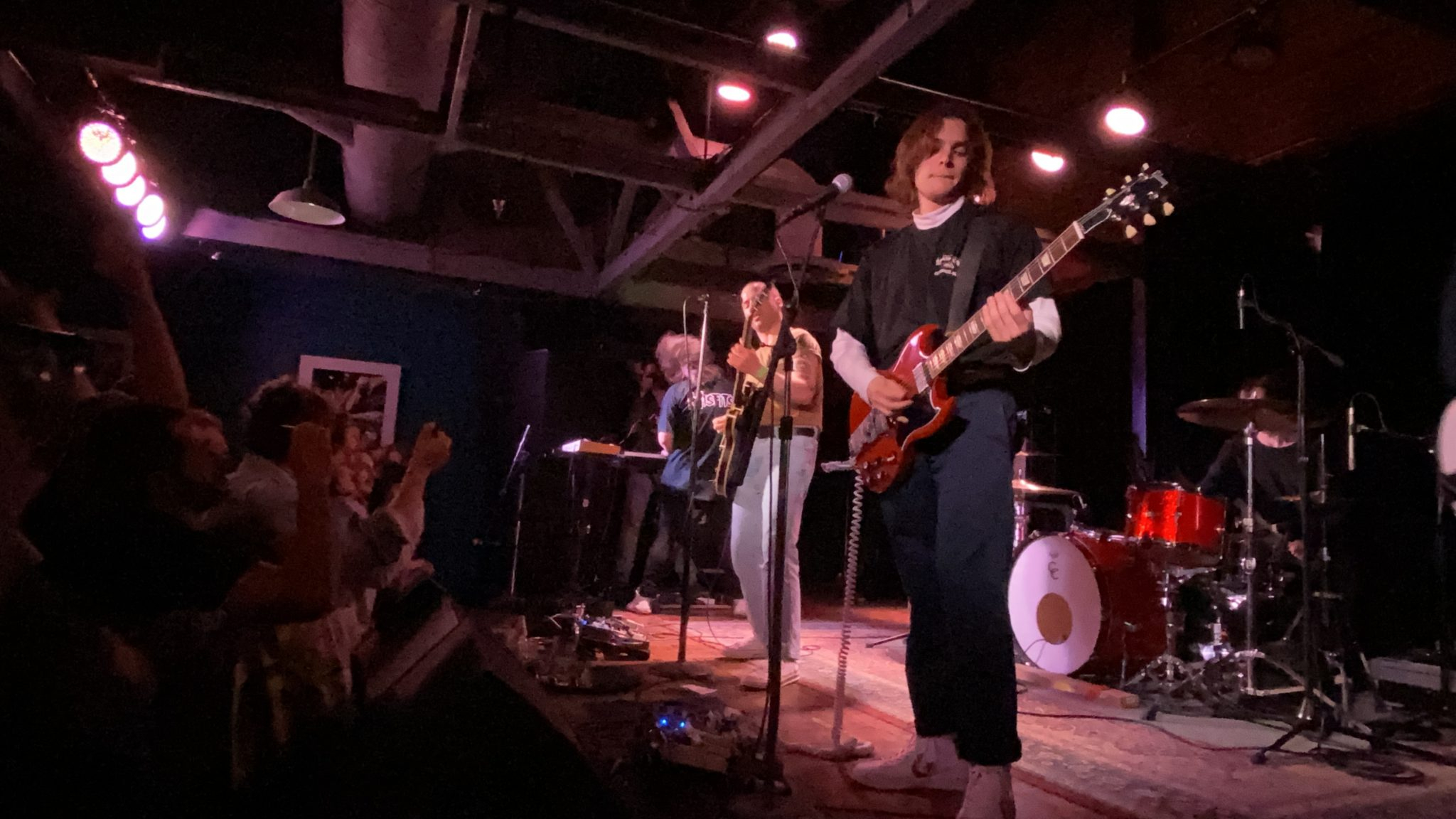 Though winter quarter is coming to an end, the music scene here in Santa Barbara is just beginning to wake up and stretch out its arms in anticipation of the upcoming springtime festival season. Recently, White Reaper, a Kentucky-based quintet rock band, headlined a concert at SOhO Restaurant & Music Club downtown along with supporting acts The Aquadolls and Native Sun.

Opening up the night was Native Sun, a fast-paced rock band from New York. Self-described as, “unabashedly reimagining the sound of white Americana through their (mostly) brown mouths” and “empowered by the will to make music against all hostility,” the four-piece band is comprised of all immigrant members: Danny Gomez (lead vocals and guitar), Jake Pflum (guitar), Mauricio Martínez (bass) and Alexis Castro (drums).

As they made their way on stage and got familiar with their designated instruments, the dance floor of SOhO began to quickly fill up with excited fans, eager to begin moshing the night away.  Immediately, Native Sun set the mood for the night with their first song, “Hippie Speedball,” a popular track from their 2018 EP “Always Different, Always the Same.” While Santa Barbara is usually a place for the calm and quiet, singer Gomez brought a vibrant energy to the SOhO stage with his unwavering voice and aggressive guitar playing skills. Native Sun continued their set with more tracks like “Palindrome,” “Juarez” and “Oedipus Race,” and successfully got the crowd on their feet and hyped up for the next two bands.

After a quick break, The Aquadolls soon took the floor and didn’t hesitate in building off the energy generated by Native Sun’s performance. Comprised of founding member Melissa Brooks (lead vocals and guitar) and new additions Jackie Proctor (backup vocals and drums) and Keilah Nina (backup vocals and bass), The Aquadolls are currently on tour promoting their most recent 2019 single, “Suck on This,” and their second album, “The Dream and the Deception,” which was self-produced and recorded on Aqua Babe Records in October of 2018. With an all-female roster, The Aquadolls brought a sense of femininity to the SOhO stage that worked to amplify their unique, DIY, heavy surf-rock sound. 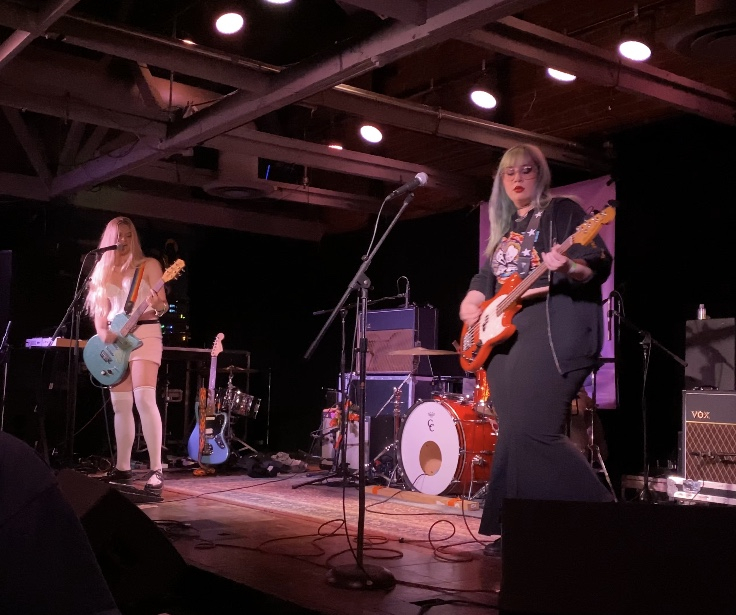 Full of confidence and excitement, Brooks often incited the crowd to sing and dance along to their set, shouting, “Alright Santa Barbara, put your hands up! Put ‘em up, put ‘em up!” during instrumental breaks in their songs. Enthusiastically playing throughout their allotted time, The Aquadolls played a majority of their discography, including older songs like “Rich Boyz” as well as newer ones like “Runaway (The Jam)” and “Cigboi.” As if their musical abilities weren’t enough, The Aquadolls strutted the SOhO stage adorned in spunky yet girly outfits; with lead singer Brooks sporting white knee-high socks, black and white platform creepers and a beret that was soon head-banged off her endless, wavy blonde hair.

Finally, it was time for the headliner to come onstage: White Reaper.

Unlike The Aquadolls, White Reaper is composed of an all-male ensemble: Tony Esposito (vocals and guitar), Hunter Thompson (guitar), Ryan Hater (keyboard), Sam Wilkerson (bass) and Nick Wilkerson (drums). Since the release of their most recent album, “You Deserve Love,” White Reaper has been relishing in the spotlight with their hit song, “Might Be Right,” which reached the No. 1 spot on the Billboard Alternative Songs Chart this past February. However, while this may currently be White Reaper’s most popular track, their recent appearance at SOhO proves they are more than one-hit wonders. 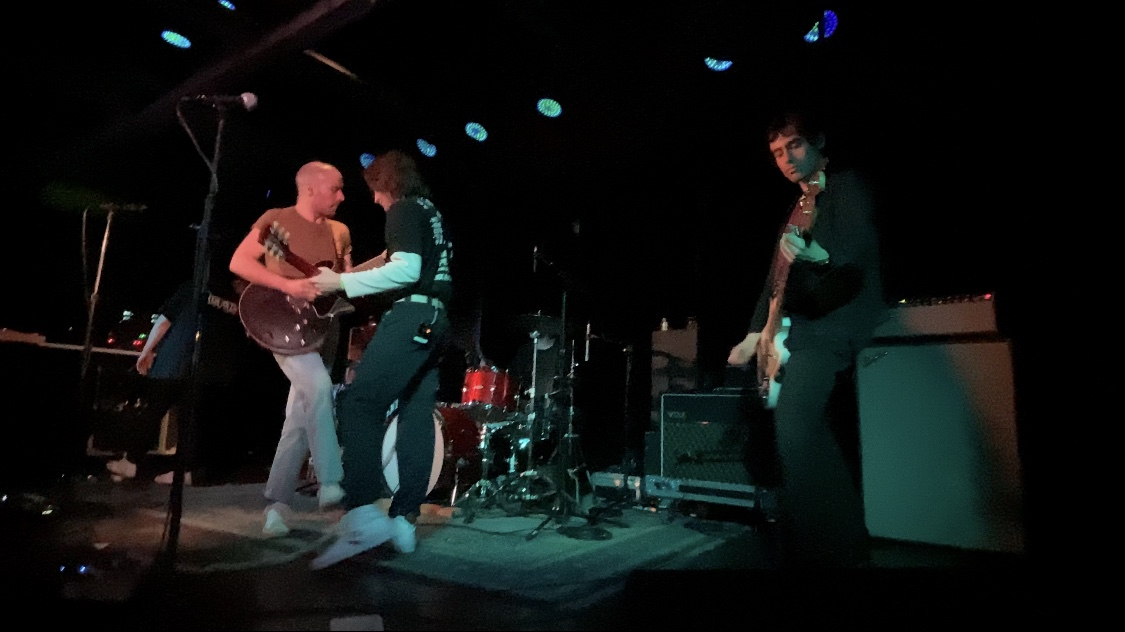 Eventually, when White Reaper made their way onto the colorfully lit stage, they were quickly welcomed by a swarm of cheers and claps from the standing audience. Their casual attire and mellow attitude as they picked up their instruments seemed to emit a subtle calmness to the crowd, which was soon disrupted as they began to perform “Headwind,” the opening track of their 2019 album.

Soon enough, the packed SOhO night club (which is located on the second story of the building) was jumping along with the music of White Reaper, and I grew frightened at the thought of falling through the floor — I guess that’s how you know it’s a good show. In between the intense rock songs, lead singer Esposito often requested the band be brought shots of tequila while they caught their breath, scanned their setlist and joked around with their fans. Upon receiving his shots, Esposito said with a laugh, “I mean I’m holding a tequila shot… How much worse could it get?”

As the night went on, White Reaper continued to connect with their fans throughout their hour-and-a-half set with witty banter. “You guys like Dave Matthews or what?” guitarist Thompson mused. “Well, yeah, we’re in Santa Barbara.”

Although White Reaper maintained the audience’s interest as they played through their discography, the anticipation for “Might Be Right” felt almost palpable throughout the dance floor. Soon enough, Hater said into his keyboard mic, “I think I start this one, guys,” and the enchanting synth introduction to the hit song flooded the SOhO speakers as the stage became entrenched in blue light. “You like that?” Thompson prodded. Oh, yes we do. 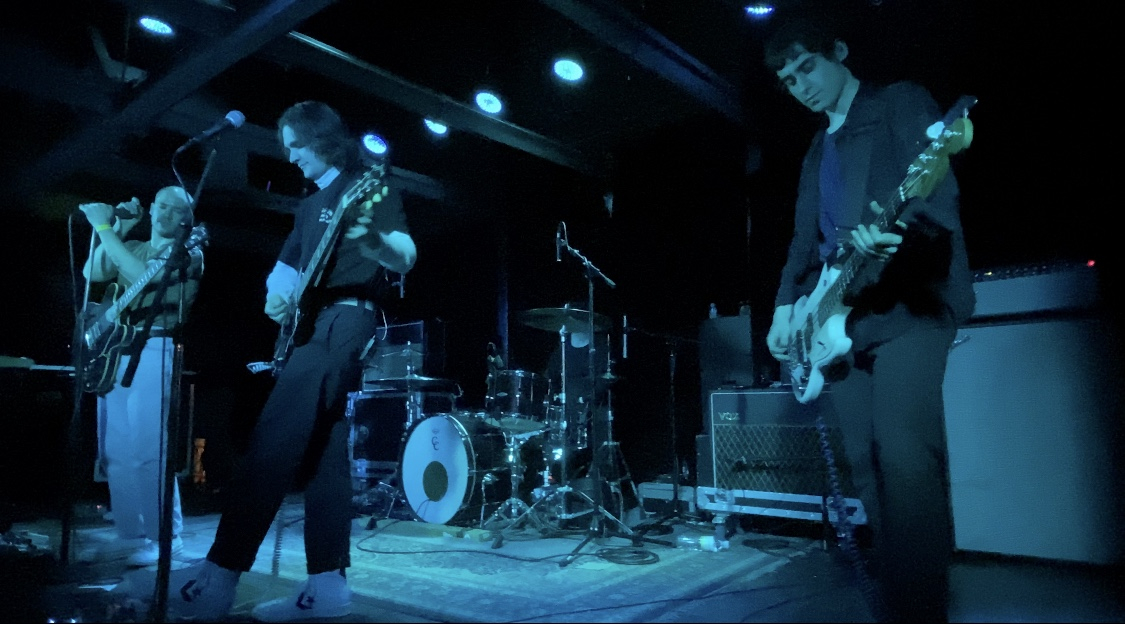 While the live rendition of “Might Be Right” sounded a little slower than its studio-recorded counterpart, White Reaper demonstrated their true musical capabilities as they jammed through the widely loved track. And, all too soon, the once colorful and bright lights turned black, and it was time for White Reaper’s set to end… Or was it?

Ultimately, White Reaper followed their fans’ commands and trotted back onstage for a final encore performance of blink-182 covers. Though they weren’t playing their own music, this was a rather fun way to end such a rockin’ show, and it was refreshing to see the band not only not taking themselves too seriously, but genuinely enjoying themselves along with the rest of us in attendance. Ending the night with nostalgic bangers like “All The Small Things,” White Reaper left fans with high energies and blissed-out grins on their faces as the SOhO show came to a close.

I remember when ariel pink played there. Now that was a show. Loved the article. Keep it up!!