These are just some of the lovely things I heard growing up as a girl with thick, dark hair. Growing up, we are all indoctrinated with specific beliefs about body hair: Hair on girls is gross, and boys without hair are gay. This makes perfect sense — when you’re 12. 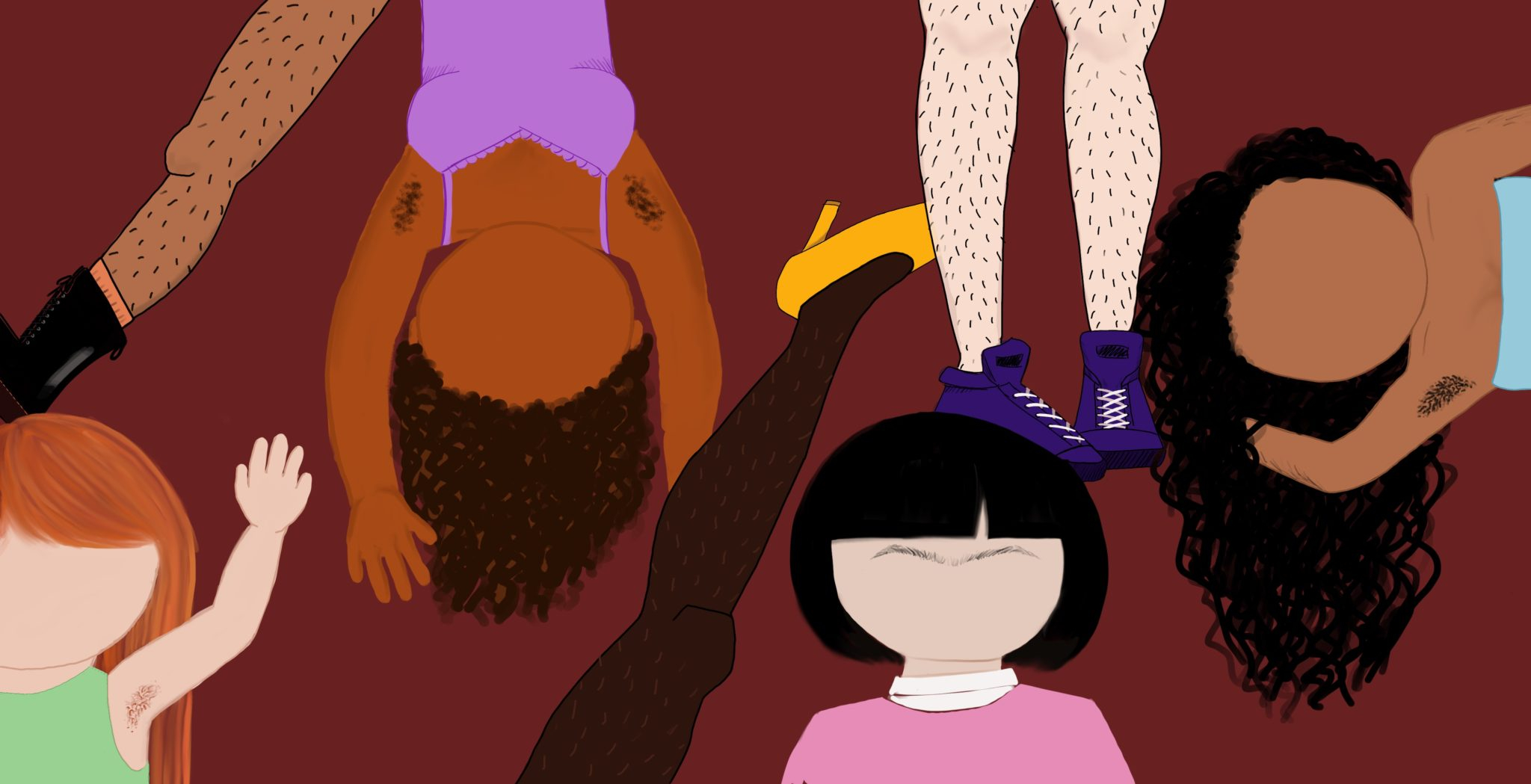 I spent my middle school years feeling pretty bad about my hair. My arms were hairy, my legs were hairy, my eyebrows looked like caterpillars — the whole works. I’m proud to say that by the time I got to high school, I was already kind of over it. Who the fuck cares if I have hair on my arms? Of course, every so often a blunt child I was babysitting would still point it out, but it just didn’t bother me the way it used to. I assumed that anyone else who had suffered these insecurities was probably over it by now, too. It wasn’t until I learned that one of my best friends shaved her arms about as frequently as she shaved her legs that I realized this was still a problem for women my age.

Why do we care so much about regulating female body hair? It all starts with razor companies. Gillette patented the safety razor in 1904. As it grew in popularity, being clean shaven became a symbol of basic hygiene. This made at least a little sense at the time: Because many people were living in close quarters and had limited access to bathing, shaving was seen as a way to prevent lice and bacteria. This idea was heavily marketed to men; to be clean shaven was to be a hygienic and civilized man.

In the 1920s, things began to change. With a new decade came new fashion trends, and we all know what the 20s are famous for: flapper dresses. This meant that women’s hairy armpits and legs were on full display. Razor companies saw this as an opportunity to sell more razors and began telling women they needed to be smooth. The epidemic spiraled from there, and now generations of women are worried about everything from the hair between their eyebrows to the knuckles of their toes and everything in between. A century later, men can have beards and still be sexy, but women are expected to look like prepubescent children.

I knew I wasn’t alone in feeling this way, so I decided to talk to other women about their relationships to their body hair and how they may or may not have come to embrace it.

A century later, men can have beards and still be sexy, but women are expected to look like prepubescent children.

The first woman I talked to was Nisha Jagota, a fourth-year student here at UCSB. One memory that Jagota shared was from fifth grade, when she and her friends discussed what they should and shouldn’t shave before a pool party. “We all got together as a group, like, ‘okay, what’s acceptable, what should we do?’ Nobody had it figured out. Nobody has a good idea of what’s ’right’ so everything’s really convoluted,” she said.

From as young an age as 10 or 11, girls already know that they will be judged. They know that there is a “right” and a “wrong,” but the standard is so arbitrary that they’re left guessing.

Jagota told me that she hasn’t worried too much about her body hair since coming to UCSB. One of the biggest moments for her in the journey of her changing relationship with her body hair was participating in the Vagina Monologues and spending time with other women who wore their hair however they wanted to. “It was really great being surrounded by all different types of women, and nonbinary folk as well,” she said. “And visually seeing women who had unshaved armpits wearing tank tops and bras … I’m not gonna say they were making a statement, because maybe they’re not, maybe it’s just for them, but for me, it really was them making a statement.”

Madi Braum, another student here at UCSB, had a similar experience after leaving high school. “I started shaving my legs consistently when I was in sixth grade, before I even really needed to,” she said. “But for years after that, I refused to go outside the house in shorts if my legs weren’t shaved.” After graduating from high school, however, Braum said something “clicked,” and she hasn’t shaved since. It’s been three years since she put a razor blade to her shins.

Dana Laufer is a third-year student at UCSB, and her first memory of being shamed for her body hair is from fifth grade. “I raised my hand in class to answer a question, and a girl said, ‘Oh my god, Dana has armpit hair.’” When she went home that day, she told her mom what happened, and she taught Dana how to use Nair to remove the hair from her armpits, resulting in painful burns that kept her from attending school the following day.

Once Dana got to high school, shaving felt more like an option than a necessity. “My brother used to say it was gross when girls don’t shave their legs,” she said, “but in high school, my friend and I used to have competitions to see who could go the longest without shaving their legs.”

I have no interest in telling anyone how they should maintain the hair on their body. I personally like it when my legs are smooth. However, had I not been socialized to believe that hairy legs are gross, it might be a different story. More than anything, I want every person to be able to make choices that work for them without being subjected to any outside pressure. Let’s just let hairy girls live.

Anabel Costa wants women to do whatever they damn want with their body hair.

Anabel Costa
Anabel Costa is an Opinion staff writer. In her spare time you can find her mastering the art of Google Docs and bringing her own containers of salsa to Freebirds.
4 Comments
Inline Feedbacks
View all comments

Like it or not, men and women are different, physically and psychologically. And as such, we have different expectations placed upon us. People love to try and tear down gender roles, and it’s true that some people have genetic hormone imbalances that make them different, but for the vast majority of people the role you’re born in is the one you will most naturally fill. You don’t have to do it, but you shouldn’t expect to not stand out or receive criticism for it. In other words, you don’t get to deliberately act different and also be insecure about it.… Read more »

Hairy armpits and hairy legs on a woman are gross. If you dont care and want to embrace it fine, but dont cry when I look at you in disgust.

It disgusts me, when people treat others disgustingly,for people being their NORMAL self. That is disgusting.