Deron Burkepile, a professor in UC Santa Barbara’s Department of Ecology, Evolution and Marine Biology has been working in southern Africa for longer than a decade, monitoring the complex and diverse plant communities which populate the region.

Burkepile first began doing field work in Kruger National Park, South Africa about 15 years ago, working with other researchers in order to better understand the relationship between large herbivores and the plant communities that host them, as well as how these interactions could be influenced by a third variable: fire.

In a paper published in the journal Ecology, Burkepile and his collaborators describe the striking ability of an ecosystem to recover after periods of severe drought and how the differing frequencies of fire affect the manner in which plant communities respond to drought.

“Fire is one of the other big structuring forces of plant communities,” Burkepile described. “We set up this experiment where we put up herbivore closures, big fences to keep them out of certain areas of the savanna. Then we set up the enclosures in areas that have been manipulated with different fire return times.”

Through this restructuring of fire regimes, researchers have been able to experimentally observe how different frequencies of fire influence herbivores, and how both of these affect plant species diversity, nutrient cycling in soils and the encroachment of woody vegetation.

Then, a fourth variable came to light. During the 2015-16 wet season, southern Africa experienced a severe drought which parched the landscape, inhibited the growth of plants and resulted in massive animal die-offs.

“What we saw that year, obviously, is nothing grew. Most of the plants died. A lot of herbivores died; there’s actually a lot of mortality of elephants, especially because of the lack of water.” 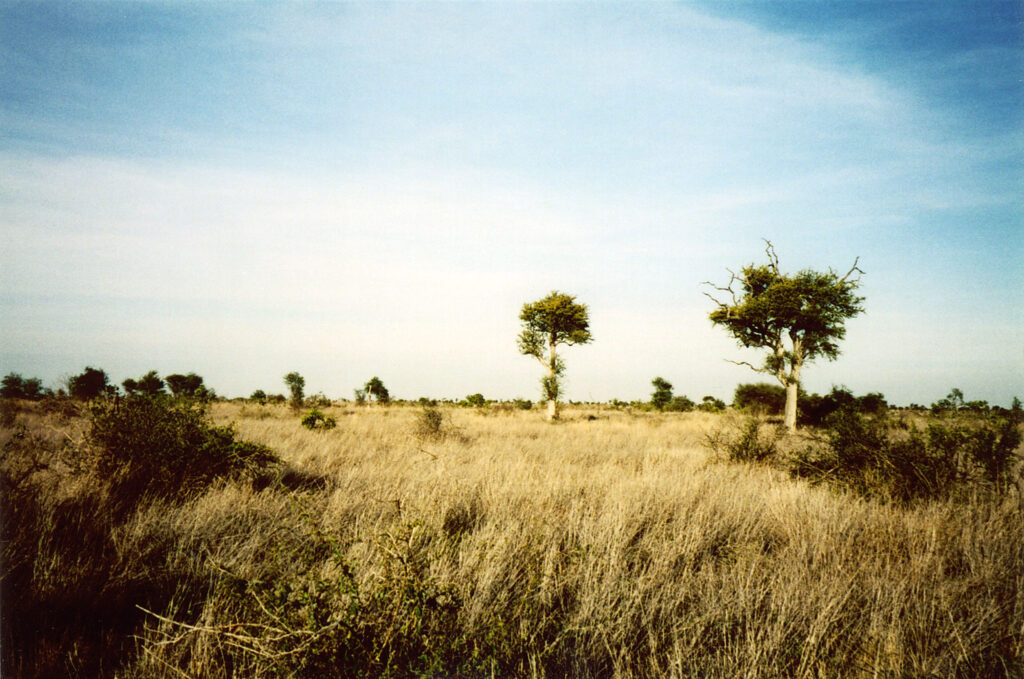 The researchers, including Deron Burkepile, studied resiliency mechanisms of ecosystems in response to climate extremes, which are predicted to occur with greater regularity and intensity. They examined the consequences of a significant drought between 2015 and 2016 in southern Africa. / Courtesy of Wikimedia Commons

Burkepile and his collaborators were able to secure a Grant for Rapid Response Research from the National Science Foundation, given to researchers to study extreme events such as natural disasters or other anomalies.

In observing the long-term impact of the drought on these plant communities, Burkepile was surprised by what they found.

“What we expected to see was this real legacy of the drought that happened. In a normal year the grasses which grow big and fast, and represent most of the biomass and most of the primary production, they seem to be hit hardest by the drought.”

Given this, the prediction would be that after the drought, when rainfall returned to normal, there would not be as much plant biomass as compared to before the drought.

However, this was not the case. Instead, within as little as a year, the aboveground net primary productivity of the plant communities recovered fully.

The “why” of this surprising resilience depends on the fire frequency of the plot observed.

In areas subject to more frequent burning, the stunning recovery could be attributed largely to forbs and woody vegetation, which were able to grow rapidly following the retreat of grasses.

“The surprising thing that happened was that the forbs, small little flowering plants, and small little woody vegetation actually took over from grasses to become the dominant plants there,” Burkepile said.

This is likely because once the grasses died, there existed an opportunity for the forbs to take advantage of the new light and space, according to Burkepile.

Meanwhile, in the unburned areas, grasses still remained the dominant plants in the community even after a period of severe drought. They were able to maintain their productivity as previously subdominant annual and perennial grasses compensated for the reduced productivity of more common grasses.

Now, Burkepile and his collaborators are looking to continue research, focusing on the impact of megafaunal remains, such as elephant carcasses, on their surrounding environment.