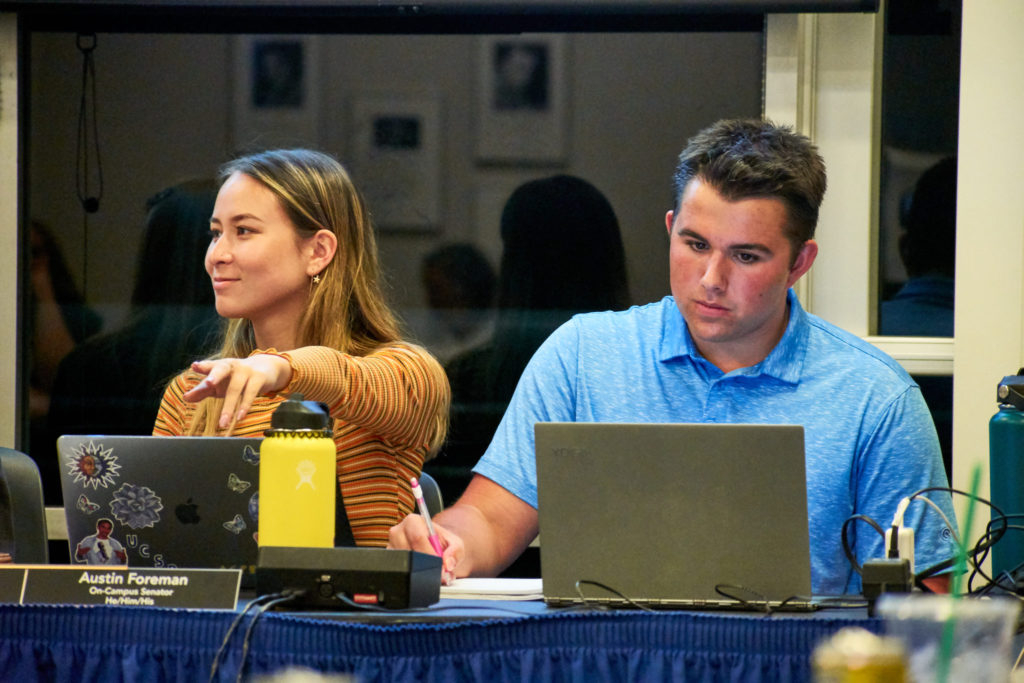 White said in an interview that she feels the needs of graduate students are left out in the greater conversation of student needs. Ida Kazerani / Daily Nexus

With the exception of UC San Francisco, cost-of-living adjustment (COLA) movements are being organized at every UC campus.

UCSB 4 COLA is calling for a COLA of $1,807.51, but the amount UC graduate students are asking for is contingent on local housing costs and varies from campus to campus

“It is unacceptable that Graduate students, the backbone of the UC educational system, should have to live rent-burdened and in poverty, forced to resort to a wildcat strike in order to advocate for a dignified wage,” the Senate resolution supporting graduate students read.

The resolution, authored by Off-Campus Senator Tianna White and Letters and Science Senator Olivia Campos, reaffirmed that the Senate is in “full support” of all UCSB 4 COLA demands. It also calls on UCSB Chancellor Henry T. Yang to “email UCSC administration and the UC Office of the President denouncing the threats to terminate wildcat strikers and request[s] that UCOP opens negotiations on a COLA for graduate students at all UC campuses.”

White said in an interview with the Nexus that she feels that the needs of graduate students are sometimes left out in the greater conversation of student needs.

Campos, who first learned about the COLA movement after one of her TAs “took the time to educate us on the issue” by holding her class’s section at the 16-hour-long Cheadle Hall sit-in last Friday, said “it’s insane that [a COLA is] a fight that our grad students have to go through because we feel so blessed to be at this institution, but so many people are struggling to make things stay afloat.”

“I’m a student who solely relies on financial aid through UCSB, as well as whatever FAFSA is able to provide me. So I’m just trying to fathom how I would barely be able to scrape by and have a healthy living situation,” she added.

Beyond giving graduate students support from the resolution, White said that Associated Students (A.S.) also paid to reserve Corwin Pavilion for the COLA General Assembly meeting on Monday, where graduate students voted to begin striking on Thursday. In addition, Off-Campus Senator Kimia Hadidi said during Senate that the Internal Vice President’s Office will “fund COLA for up to $1,000 for supplies.”

Off-Campus Senator Daniel Segura-Esquivel, a student sponsor on the resolution, was outspoken about the Senate’s lack of engagement with not just the COLA movement but with student activism this year, slamming his fellow senators.

“People continuously come up to me, asking me, ‘Where are the elected representatives that we supposedly look up to?’ With the COLA movement going on, it’s not just enough for a couple of us to be showing up,” Segura said to the Senate.

Campos and White, who both confirmed they will be present at Thursday’s wildcat strike alongside graduate students, emphasized the need for undergraduate support as a pipeline to create awareness about this issue and to rally the student body to support a COLA.

“When the strike at Santa Cruz started, they did not have a lot of grad students striking. They didn’t have any documentation of faculty support or undergraduate support. I think a really cool part about our [COLA] movement is that we’ve already started to document all this undergraduate and faculty support,” White said.

“And I think it’s going to be really helpful moving forward in our dealings with administration,” she added.

White also made note that although the lifestyles and responsibilities of graduate students are different from those of their undergraduate student counterparts, they are not mutually exclusive.

UCSF. Guess they are all too busy working 16 hours a day saving lives.

Interesting that the Associated Students Senate are supporting this while being blind to the 17,000 undergraduate students who aren’t receiving the education that they are paying for. I’m just glad to know that the AS Senate doesn’t stand with nor supports me. This situation makes me question my enrollment to any UC affiliated college.

Oh, I think being with COLA will be a life experience.

The sad fact is that the UC does a better job than the majority of research companies (er, Universities) in the education department. At U of Illinois, for example, undergrads occasionally teach intro courses.

You’re right! This has caused a real disruption for the undergrad students. These striking students are under a contract negotiated by their union, which includes a no strike clause. In the real world, when you refuse to do your job AND cause further disruption, you lose that job. I’m glad that the administration finally did it. Everyone in Santa Cruz is dealing with the high cost of living. Do your job a-holes. These jobs actually pay pretty well, and aren’t that hard. I know students that would do those jobs for free for the experience and their resumes.