The Daily Nexus
Sports
Red-Hot Gauchos Blow Out Highlanders in Third-Straight Victory
February 25, 2020 at 10:22 am by Brandon Victor 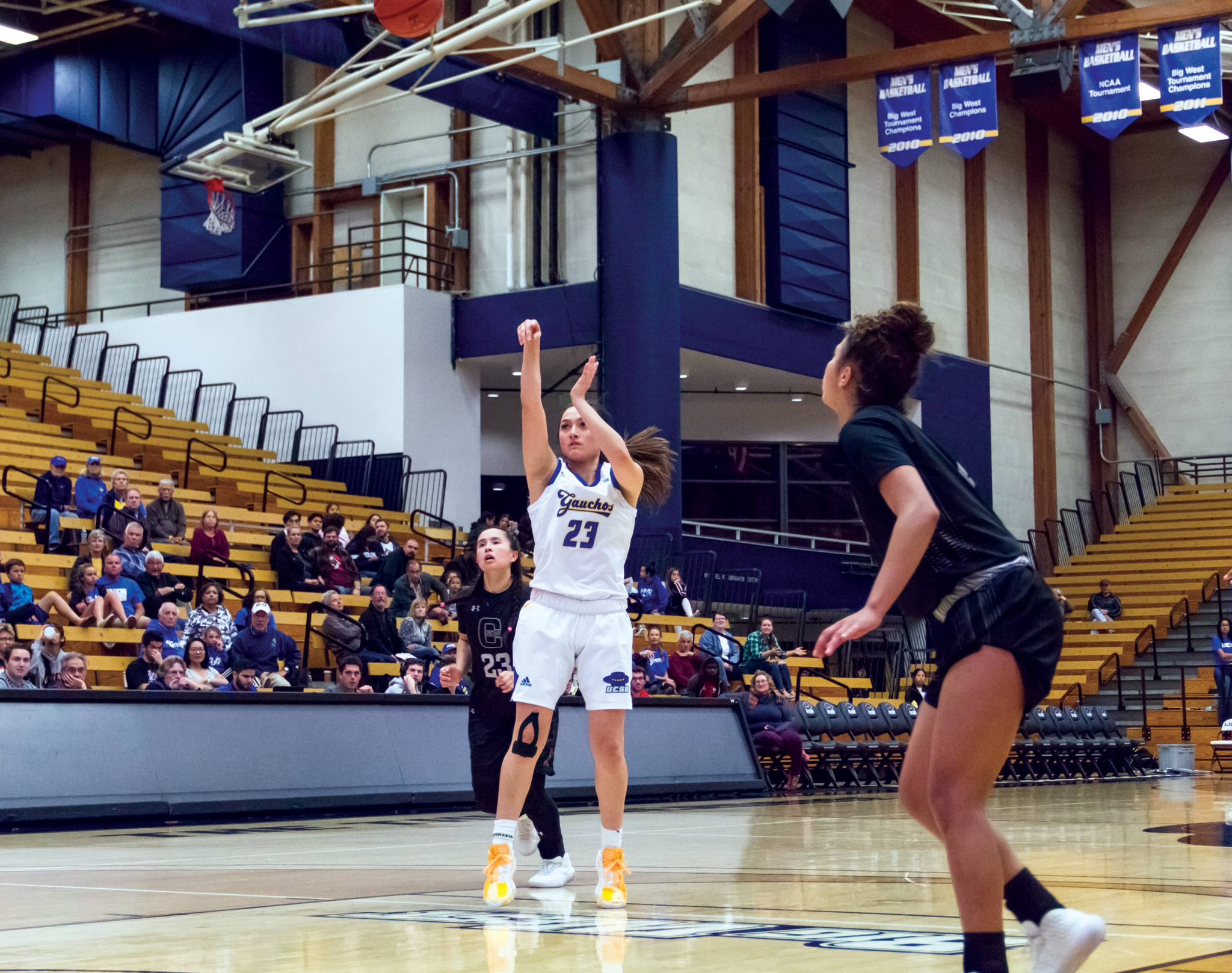 After defeating Cal State Northridge on Thursday, the UC Santa Barbara women’s basketball team turned in one of its most dominant performances of the season on Saturday, blowing out UC Riverside 65-47 in front of 265 supporting fans.

For the first time all season, UCSB strung together multiple conference wins in the same week. With the victories, the Gauchos (12-14, 7-6) move into sole possession of third place in the Big West Conference, while the Highlanders (8-18, 4-8) fall into eighth place.

In the first matchup between these teams — a 66-61 victory for Riverside — the Highlanders’ backcourt dominated for much of the game. In that game, junior guard Keilanei Cooper led the way with 23 points, while star redshirt-senior guard Jannon Otto chipped in 14 points as well.

This time around, the Gauchos’ perimeter defense completely nullified the two guards. On the night, Cooper finished with a mere 2 points, shooting 1-11 from the floor in one of her least efficient performances of the season.

But perhaps the biggest reason for the ‘Chos blowout victory was the defense of redshirt senior Coco Miller, who was tasked with the unenviable job of guarding Otto. Coming into the game, Otto ranked second in the conference with 16.6 points per game. An elite scorer, Otto has been highly efficient all year, shooting 35% from deep and 86% from the free-throw line.

None of that mattered to Miller on Saturday — she completely nullified Otto in the first half. At halftime, Miller had collected 5 steals; in comparison, Otto had only scored 4 points on 2-7 shooting.

“I thought [Miller] was unbelievable on defense,” Head Coach Bonnie Henrickson said. “She stayed with Otto like velcro.”

While Otto actually finished the game with 17 points on the night, a majority of that production came with the game well out of reach. With Otto struggling to find her footing on offense, the Riverside offense limped to only 15 points in the first half.

Conversely, the Gauchos had one of their finest offensive first halves in recent memory, with the team scoring a resounding 40 points in the first half. Yet again, freshman Ila Lane demonstrated her resounding talent on Saturday, contributing 17 points and grabbing 12 rebounds en-route to her 17th double-double on the season. After the performance, Lane now leads the nation with 13.1 rebounds per game on the season.

“So much of post play is positioning; [Lane] was good early and the passes were on time and on target,” Henrickson said.

Another player who excelled all night was freshman Johnni Gonzalez. While the stat sheet won’t reflect her overall impact, Gonzalez helped to control the tempo of the ‘Chos offense all night — especially when junior guard Danae Miller left with an injury. In total, Gonzalez finished the game with 8 points on 3-6 shooting, including a deep buzzer-beater 3-pointer that gave the ‘Chos a 25-point lead at the half.

Senior guard Tal Sahar also continued her recent hot streak on the offensive end, scoring 16 points off the bench on Saturday. In one of the most impressive plays of the entire game, Sahar hit a dream-shake fadeaway jumper that gave UCSB a 54-25 lead in the third quarter.

While Riverside chipped away at the Gaucho’s lead in the fourth quarter, it was ultimately a story of too little, too late for the Highlanders.

For the first time all season, UCSB sits in sole possession of third place in the conference after winning its third straight game on Saturday. Next, the Gauchos travel to Cal Poly on Wednesday, looking to sweep their rivals. Tipoff is scheduled for 7 p.m.