The Daily Nexus
Sign of the Times
Why Elizabeth Warren is the Ultimate Progressive Reformer
February 21, 2020 at 10:26 am by Sara Rubin 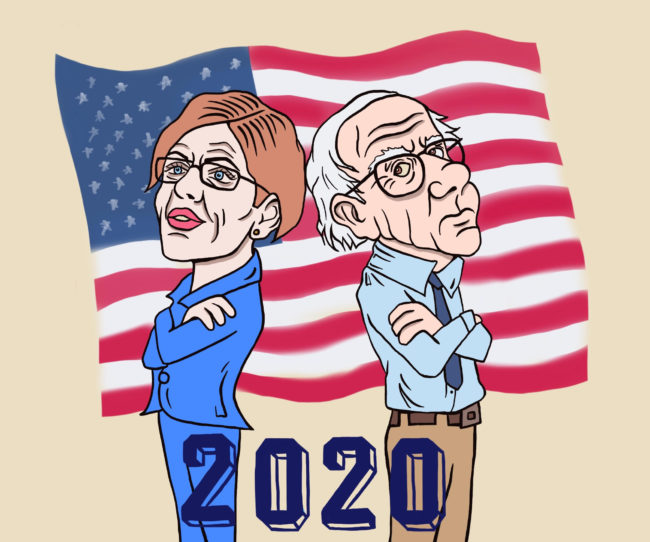 Senators Bernie Sanders and Elizabeth Warren are often called two sides of the same coin due to their similar policy stances. While these two candidates may seem one and the same, certain defining values play an important role in distinguishing between them. Sanders upholds the ideals of a democratic socialist, while Warren stands by capitalism in a well-regulated economy. Sanders defends the notion that the current economic structure is “rigged” and must be abolished completely in order to establish a government that reinvents justice. Senator Warren embraces policies of change to the current system, and offers a remedy in her economic patriotism agenda. She pledges a commitment to fundamentally change the government’s approach to the economy, by placing American workers and middle-class prosperity ahead of large corporations and Wall Street.

As exhibited by their policies, Sanders and Warren represent two vastly different approaches to changing the injustices present in the American system of government. The leftist stance that Sanders presents is founded on the notion that the United States must abolish the system that enables economic disparities, while Warren seeks to reform the system from the inside.

One issue that is at the forefront of this election is the student debt crisis affecting 44.7 million Americans, according to a 2018 report by the Federal Reserve Bank of New York. The $1.5 trillion dollars of student debt in the United States is an issue that the Democratic party pledges to eradicate. However, Senators Sanders and Warren offer varying remedies that demonstrate the divisions between their idealistic and realistic approaches, respectively.

Warren understands the urgency of these national issues, but her policies are comparatively pragmatic and cost-effective.

Senator Sanders pledges to relieve all student debt by raising money through a Wall Street tax that would add fees to the sale and trade of bonds and stocks. This ambitious effort benefits people of all classes, but asks the government to raise vast amounts of money through means of taxation. This unrealistic plan fails to earn enough revenue to support this initiative, and stands to affect middle class workers. While the tax is aimed at Wall Street investor offices, the debt would fall upon investors themselves when making a transaction. This would discourage trading and hinder the capitalist opportunities that this country is powered by. Senator Sanders proposes high aspirations that in theory would help shape the country. However, these methods of funding fail to meet the demands his programs call for. A sensible candidate such as Warren recognizes the practical approach that must be taken in order to enact real change in the government.

Senator Warren, on the other hand, presents an initiative to focus on students who come from lower income households. Her plan proposes to cancel $50,000 in student loan debt for every individual with an income under $100,000. For those with an annual income between $100,000 and $250,000, she promises substantial debt reduction. Warren plans to fund her program with a “wealth tax,” which levies a 2% tax on fortunes over $50 million, and a 3% tax on individuals who have more than $50 million. Her objective allows for a more affordable plan than the one Senator Sanders advocates for. The Vermont senator’s bill would cost the government $2.2 trillion over the course of 10 years, while Warren’s would only cost $1.25 trillion over the same timespan. This approach to the higher education crisis in the United States demonstrates the dream-like idealism characterizing Senator Sanders’ policies. Warren understands the urgency of these national issues, but her policies are comparatively pragmatic and cost-effective.

Warren not only seeks a more practical approach to politics, but she has demonstrated with her extensive track record the effort it takes to successfully implement one’s policies in a bipartisan government. A good indicator of a politician’s potential for presidential success is their ability to pass bills while serving in the House or Senate. During the 2017-2019 congressional terms, when both the House and Senate were controlled by the Republican party for a year, Warren introduced five bills that passed in both houses. Senator Sanders was unable to pass any bills.

While Sanders preaches idealistic dreams of change, it remains unclear whether or not his policies can actually be enacted.

Warren embodies a candidate that can decisively enact her policy reforms and bring about change to the political system. She stands by abolishing capital punishment and private prisons; raising the federal minimum wage to $15 an hour; free college education and Medicare For All. She is committed to investigating large corporations and their leaders, and taxing the wealthy to support welfare programs for all.

While Sanders preaches idealistic dreams of change, it remains unclear whether or not his policies can actually be enacted. Issues in governmental law cannot be solved by just one bill or proposal of change. In order to eradicate the major crises affecting the country today, the United States needs a leader with a clear head who possesses the ability to negotiate with the opposition. Radicalism only goes so far as its opponents will allow, and with a Republican majority still existing in the Senate, it is difficult for mass reform movements to mobilize. Slow and steady wins the race, and Senator Warren plans to enact reform through the strategy of cooperation in order to avoid facing large roadblocks that will result in political gridlock.

Both politicians are leaders of progressive reform; however, Warren has not embraced Democratic socialism to the extent that Senator Sanders has. She promises to stand for compromise and uphold the values of a free market in the United States. It is time for a woman to fulfill the role of the President of the United States and carry her message to the White House.

Sara Rubin strongly advocates the election of Elizabeth Warren to the White House.

Sadly, neither of the two will prevail against Trump. We need to start thinking outside of our little microcosm and start considering who is electable in the country at large.

incumbency is a bitch

Go Trump. How can anyone say no to Trump at this point in time with the way the stock market is doing? These radical left wing ideas of Warren and Sanders will never clear the senate… not in a million years.

What progressive reform do we even need at this point? The only thing bad about this country is people’s delusional, doomsday mindsets leftover from 2016, and even that’s starting to fade.

I’d love for Trump to protect the National Parks/environment a little more, but aside from that there’s literally nothing to complain about. Things are better for everyone.

ever heard of the saying if you don’t have anything nice to say keep your mouth shut?

Just saying that the argument is flawed lol that’s not an insult…..

Elizabeth is alright, certainly a better option than Bernie, who just talks out of his anus and never explains how he will pay for anything. Warren is a professor, and even though I disagree with her mostly, she has credentials and integrity, plus she understands how the banks operate. Bernie doesn’t understand the Fed. Abolishing the private option for healthcare is McCarthyism. I think Bloomberg is a prick but I’d prefer him over Trump. I’m neither dem nor rep, but he has that edge and power. And I didn’t vote for either Hillary or Trump in 2016 because I thought… Read more »