The Daily Nexus
Sports
UCSB To Face CSUN, UCR in Key Conference Matchups
February 20, 2020 at 9:59 am by Brandon Victor 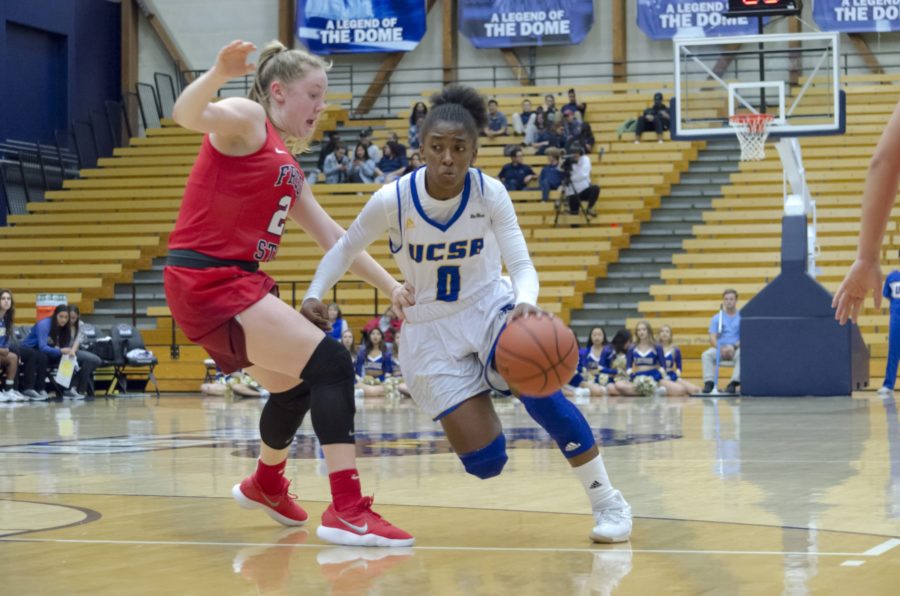 After yet another split last week, the UC Santa Barbara’s women’s basketball team (10-14, 5-6) sits in fifth place in the Big West conference — one game behind third-place Long Beach State, but only one game ahead of eighth-place UC Irvine. With a logjam in the middle of the standings, UCSB will need to string together a win streak if it hopes to improve its seeding for the conference tournament.

First, the ‘Chos will take on the Matadors on Thursday in a rematch of last Saturday’s game — a 65-55 road victory for Santa Barbara. That game was in large part dominated by freshman phenom Ila Lane, who finished the game with 16 points and 17 rebounds. On defense, Lane played a key role in shutting down CSUN’s leading scorer — senior De’Jionae Calloway, who finished the game with only 4 points on 2-12 shooting from the floor.

Senior guard Tal Sahar also turned in one of her best performances of the season, chipping in 18 points off the bench for UCSB. In the fourth quarter in particular, Sahar left her stamp on the game, drilling three 3-pointers and shooting 75% from behind the arc in the quarter.

Still, the Matadors were able to keep the game tight for much of the night. In particular, sophomore  guard Jordyn Jackson had an excellent night, finishing the game with 16 points on 6-9 shooting. In addition, despite a rough shooting night for CSUN’s starters, the team’s bench excelled all night, scoring 20 of the team’s 55 points.

While UCSB will have the home-court advantage this time around, don’t expect Calloway to shoot 17% from the floor this time around. The Matadors will also likely double and triple-team Lane in the post this go-around, meaning the Gauchos will need a significant contribution from their backcourt on Thursday.

While senior Coco Miller didn’t shoot the ball particularly well on Saturday — finishing the game with 8 points on 3-13 shooting — her contributions extend far beyond her field-goal percentage. Currently, Miller ranks fourth in the country with a 3.1 assist-to-turnover ratio. Against the Matadors, Miller finished the game with 8 assists and only 2 turnovers and will need to continue that level of production and efficiency if the Gauchos are to walk away victorious on Thursday.

On Saturday, UCSB will take on UC Riverside (8-16, 4-6), looking to avenge their loss from earlier this season.

In that game — a 66-61 victory for the Highlanders — Lane struggled mightily with foul trouble, only logging 26 minutes on the night. Without the focal point of their offense, the Gauchos struggled from the floor, shooting only 36% on the night.

This time around, UCSB will need to make a concerted effort to slow down UCR’s backcourt. In the previous matchup, junior guard Keilanei Cooper roasted the ‘Chos all night, finishing with 23 points on an efficient 8-13 shooting split.

Most importantly, Santa Barbara needs to limit the production of redshirt senior Jannon Otto — who ranks second in the conference with 16.6 points per game. One of the best players in the entire conference, Otto can score from anywhere on the floor, shooting 36% from deep and 88% from the free-throw line.

If the Gauchos can stay out of foul trouble and limit the production of UCR’s backcourt, they should have a good chance to finish the week with a crucial victory. Riverside has struggled mightily away from home this season, with only one of the team’s conference wins coming on the road.

UCSB will take on Cal State Northridge on Thursday at 7 p.m. at the Thunderdome, before finishing the week against UC Riverside on Saturday at 2 p.m.