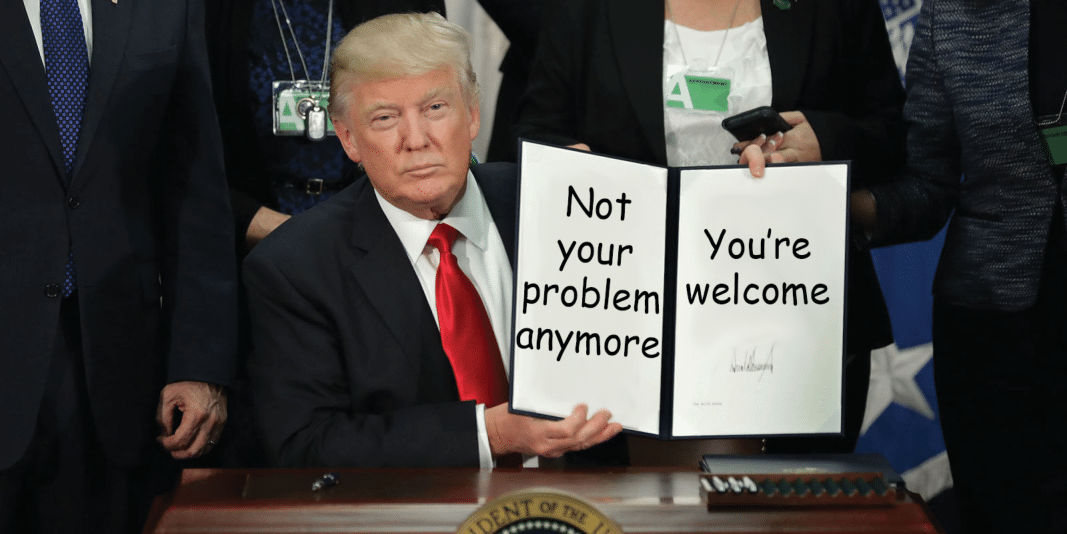 On Wednesday, President Trump signed an executive order requiring the U.S. Department of Education to create a new student loan deferral program allowing students who find themselves in more debt than they can handle to simply pass on their financial burdens to their unborn children.

A few moments later, Trump was quoted saying, “The Democrats don’t care about students, but I saw the polls, and with the young people the numbers were not great. I realized I had to do them a huge favor.”

In an administration full of surprises, this has only been the latest unexpected development. Anonymous sources have indicated that Trump got the idea to solve one generation’s debt problem by allowing them to indebt their offspring after one of his advisors explained to him how Social Security works.

The program will not only offer students a new way to relieve themselves of debt, but will also allow them flexibility in choosing how they sign away their children’s futures. The burden can fall exclusively on the first-born child or, as long as the student has more than one child, it can be divided among them. Do you want to motivate your children to succeed by playing favorites? The program will allow for that too, as parents will be able to allocate their debt however they see fit, until their children turn 18.

In today’s economy, parents are increasingly often finding themselves unable to leave an inheritance for their children. Fortunately however, the threat of crippling debt will be an effective new way to incentivize good behavior.

When reached for comment, Robert O’ Brien, Trump’s national security advisor, was effusive in his praise of Trump’s policy decision.

“It’s a great day to be an American. I have always said the best solution to the national security challenges that we face is having more Americans. Now that student debt will compel young people to have children instead of discouraging them from doing so, we will continue to have the supply of bodies we need to maintain global order.”

The new deferral program will certainly contribute to the continued preeminence of the U.S. military. Children who find themselves on the receiving end of the debt their parents accrued with abandon will be able to have it forgiven if they enlist.

At a time when falling birth rates in highly developed countries are threatening their national security and economic stability, this program will make the combination of an educated populace and out-of-control population growth more than just a pipe dream. At the very least, it was an act of procrastination executed with a deftness that would make any college student proud, the repercussions from which we won’t have to concern ourselves with for decades.

Chance Hope is excited for his fertile loins to finally do some good for this world.