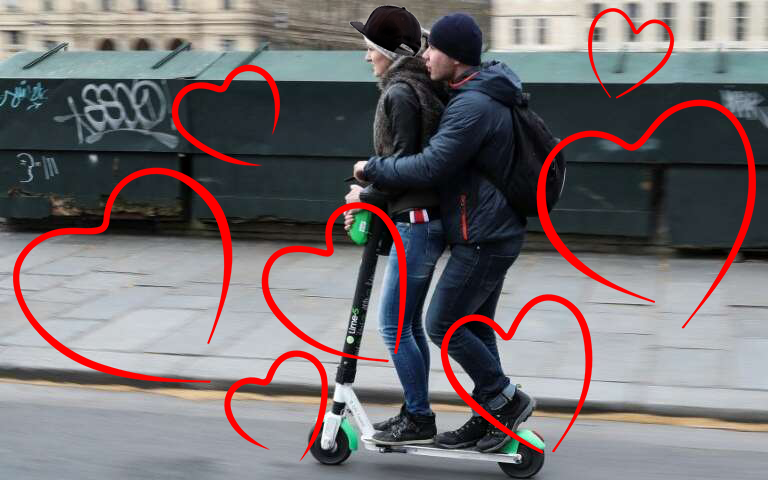 We often find love in the strangest places, whether it’s 11 shots deep at Sandbar or in the 8 a.m. Friday section where you look more like roadkill with a pulse than a college student. For second-year student Justin Surt, holding onto his friend’s waist during their tandem Lime ride was when he first felt the spark of romance to be.

“We just got some burgers at Deja and were trying to mob back to our house,” Surt told Nexustentialism. “But there was only one Lime so we decided to hop on it together –– if only we had known what was to come.”

They hopped onto the Lime scooter and rode it “Bound 2” Kimye style. Surt took the back of the scooter while his friend Bryce Kuriuse took the front of their veritable chariot. The ride was going smooth, but the situation changed when they hit the 66 block of DP.

“Everything seemed perfect in the moment and he smelled like Gain detergent and Natty Daddys,” Surt recounted. “I didn’t know what to think then, but now I think I love him.”

Being the diligent reporters we are, Nexustentialism wanted to follow up with Kuriuse about his perspective on this Isla Vistan love story. When questioned, he became visibly upset: “Wait what the fuck, dude? Justin said that was his phone touching my ass.”

With this story in mind, we at Nexustentialism are wondering if the Lime scooter ride will be mentioned in any wedding vows in years to come.

Ryan Milton always makes sure he is the bottom — um, front on multi-passenger Lime rides.