Last week, Katherine Mirica, an assistant professor of chemistry at Dartmouth College, held a seminar at UC Santa Barbara about molecular engineering of materials for chemical sensing and microelectronics. 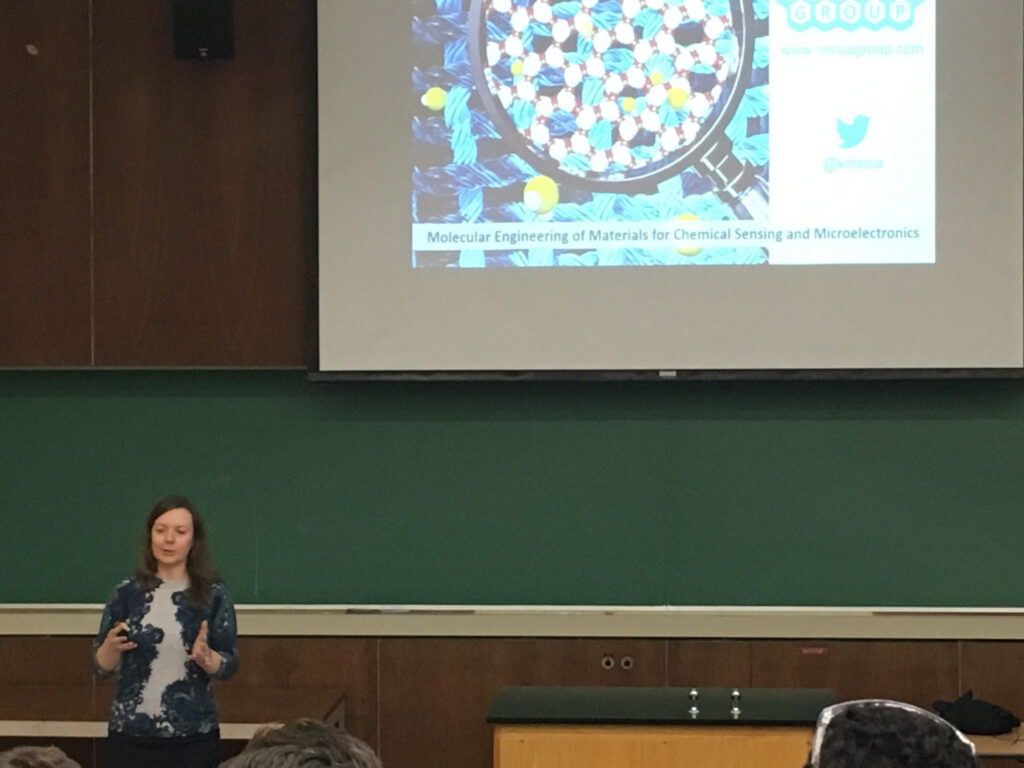 Mirica briefly discussed her academic background and upbringing. She was born in Ukraine and later moved to the U.S., where she obtained her undergraduate degree at Boston College and her Ph.D. at Harvard University. Following this, she served as a postdoctoral fellow at the Massachusetts Institute of Technology for over three years, after which she became a member of faculty at Dartmouth.

The researchers are able to accomplish this through three research thrusts: using multifunctional materials for electroanalysis (a process by which potential or current is measured through an electrochemical cell containing an analyte, or substance of interest), utilizing molecular solids as a temporary adhesive and examining electroactive materials.

During the seminar, Mirica focused on specific advancements she and her group made in the first two thrusts.

With regards to the first thrust, the group studied a special class of materials known as conductive two-dimensional metal-organic frameworks (MOFs). They noticed that many of the core aspects of these materials were still unknown, and thus, “many opportunities for fundamental science were available to pursue.” As a result of this, the group was able to develop highly sensitive MOF-based sensors that could detect small concentrations (subparts per billion) of gaseous analytes such as ammonia, hydrogen sulfide and nitric oxide in the presence of water.

Mirica underscored the implications of such research, stating that “designing new materials to detect certain gases would change the way we view these gases,” specifically within the pharmaceutical industry.

Mirica also discussed the creation of self-organized frameworks on textiles (S.O.F.T. devices) and their effectiveness in the detection of gases. Even in the presence of increased heating, application of detergent and other pervasions, S.O.F.T. devices maintained high conductivity and flexibility.

S.O.F.T. devices also provide a means to successfully capture and filter these gases.

Hence, Mirica elucidated how they are particularly applicable in the creation of thin layers of protective equipment such as gas masks, alerting wearers if harmful chemicals, even in small concentrations, are penetrating said equipment. These devices also have implications in the development of portable electroanalytical systems and smaller wearable devices, as large carbon-based electrodes can be scaled down and advanced with “novel materials and processes.”

Mirica states that now, we should “build circuits as we do skyscrapers” and pursue a three-dimensional approach in design, something which seems to be working as the tech industry is getting better at packing more layers into a device.

However, one of the constraints that the industry faces lies in the adhesives they use. As a result, Mirica and her group investigated the use of polycyclic aromatic hydrocarbons (PAHs) as sublimable adhesives, adhesives which are rapidly removable through sublimation but maintain their adhesive properties in their solid state. She then examined other molecular solids and found that camphor had high success “in the realm of temporary adhesion,” which she states is ideal for bonding bumpy structures prevalent within the semiconductor industry.

Despite making several breakthroughs within chemistry, Mirica and her team are nowhere near done. She is continuing to pursue her research in the hope that she can help develop more “robust energy devices” in a multitude of different fields and industries.