The Daily Nexus
News
From “The Central Park Five” to “The Exonerated Five”: Yusef Salaam Speaks at UCSB About Criminal Justice System
February 13, 2020 at 12:13 am by Megan Ramsey

“The words ‘guilty’ echoed so many times in that courtroom I lost count.” 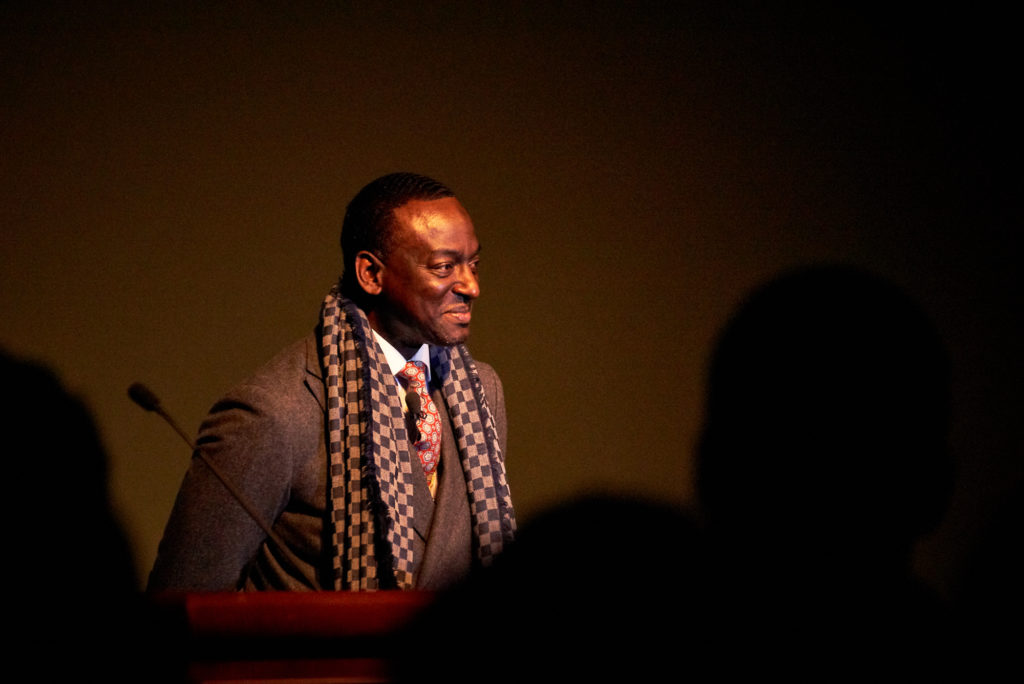 Salaam emphasized in his talk that he believed the 13th Amendment needs to be reformed in order to fix the criminal justice system. Siavash Ghadiri / Daily Nexus

Salaam, along with four other teenagers, was wrongly convicted at 15 years old for the rape and assault of 28 year-old Trisha Meili in April 1989. He spent six years and eight months in prison before the real perpetrator — Matias Reyes — confessed. In 2002, Salaam and the rest of the Central Park Five were exonerated.

Following their release from prison, the exonerated five received a settlement of $41 million from New York City in 2014. In 2019, the limited series “When They See Us” was released on Netflix, tracing the story of their convictions and bringing their cases back into the limelight.

During his talk on Tuesday, Salaam talked about his experience in prison, describing the Clinton Correctional Facility, which he was transferred to in 1995, as one of the hardest prisons in New York state. It was there where he met members of the Black Panther Party who told him that he was the 1,113th new prisoner in the span of two months, Salaam said.

Stemming from his experience at the facility, Salaam emphasized in his talk that he believed the 13th Amendment needs to be reformed in order to fix the criminal justice system.

“The true meaning and understanding of the 13th Amendment cannot truly be understood until you look at it in a light of the prison industrial complex,” Salaam said.

“Many of us come from communities where we have been told that we are going to be dead or in jail before we reach the age of 21. And more importantly, we actually believe that,” he continued.

Salaam focused on the disproportionate rates of incarceration of people of color during his talk, noting that the 13th Amendement allowed slavery to continue to exist.

“They said, ‘Okay, we’re going to figure out how we’re going to keep slavery by just adding it to the 13th Amendment and we’re going to make sure that they don’t even realize that slavery is alive and well until they get caught by the system,’” Salaam said.

Salaam said that society needs more people fighting on the inside and outside of the criminal justice system in order to eliminate systemic injustice towards people of color. He added that as long as the 13th Amendment states that slavery is acceptable as a punishment for crime, people of color will remain marginalized and subjected to injustice under Constitutional oppression.

“People who are exonerated receive no services as return citizens. As a matter of fact, when I left prison, the officer literally said to me, ‘I’ll see you later,’” Salaam said.

Salaam recounted the Exonerated Five’s time in the courtroom, particularly when they were convicted and given no time to say goodbye to their families.

“Every single day I would go to court and I would face a mob of angry eyes, peeling my life apart, describing me in ways that I had not known, and had not accepted. To me, the American Dream was still alive. There was still something to attain. I had not yet truly understood this nightmare that I had woken to,” Salaam said.

Six months into his sentence, Salaam said an officer asked him a question that changed the trajectory of his life.

“The most powerful question that was asked of me — ‘Who are you?’ — I began to unravel the riddle of me,” Salaam said.

“Society tends to tell young people in particular, you’re worth nothing. And if young people believe that, they begin to move about their life as if they were a mistake. But you’re worth everything and you matter,” he added.

Salaam said that he used the perseverance and strength that his mother gave him to stand up for himself when he was on trial. He recalled speaking the words of Malcolm X, followed by a rap poem he wrote, which resulted in a furious judge and a news article titled “Salaam Baloney.”

“Dr. Maya Angelou provided us some advice before she left this world. She said you should be angry, but you must not be bitter. She said bitterness is like a cancer. It eats upon the host,” Salaam said.

In 1989, now-President Donald Trump put out ads in several daily newspapers with the headline “Bring Back the Death Penalty. Bring Back Our Police!” in reference to the alleged crimes of the five teenage boys, Salaam told the audience.

After his exoneration, Salaam recalled trying on suits for a job interview and unknowingly wore a Trump suit — which he quickly threw off once discovering its maker.

“You have to surgically remove whatever it is that’s holding you down because imagine me one day waking up, turning on the news and the man who took out a full page ad calling for the state to kill us is the president of the United States. If I keep thinking about him, and the apology that I want, I’ll be living a miserable life,” Salaam said.

“[Forgiveness] allows you to move forward and release all the negativity and pain that’s holding you back,” he added.

So will the left finally admit that innocent men are sometimes punished for rape? You champion the Central Park Five (or “Exonerated Five” or whatever) but you create an environment at UCSB every day that leads to the same sort of thing happening. UCSB’s track record on this issue is terrible. Only two years ago, the former UCSB Director of Judicial Affairs hid evidence in a Title IX case against a student of color. Where was the outrage about that? On the contrary, most of the campus left piled on the wrongfully accused student and helped demonize him.