More than 150 graduate students met in front of the University Library on Monday afternoon and then marched to Cheadle Hall to present their demands to UC Santa Barbara administration for a cost-of-living adjustment – an adjustment that would help alleviate the rent burden that many graduate students face, as emphasized during the Monday rally. 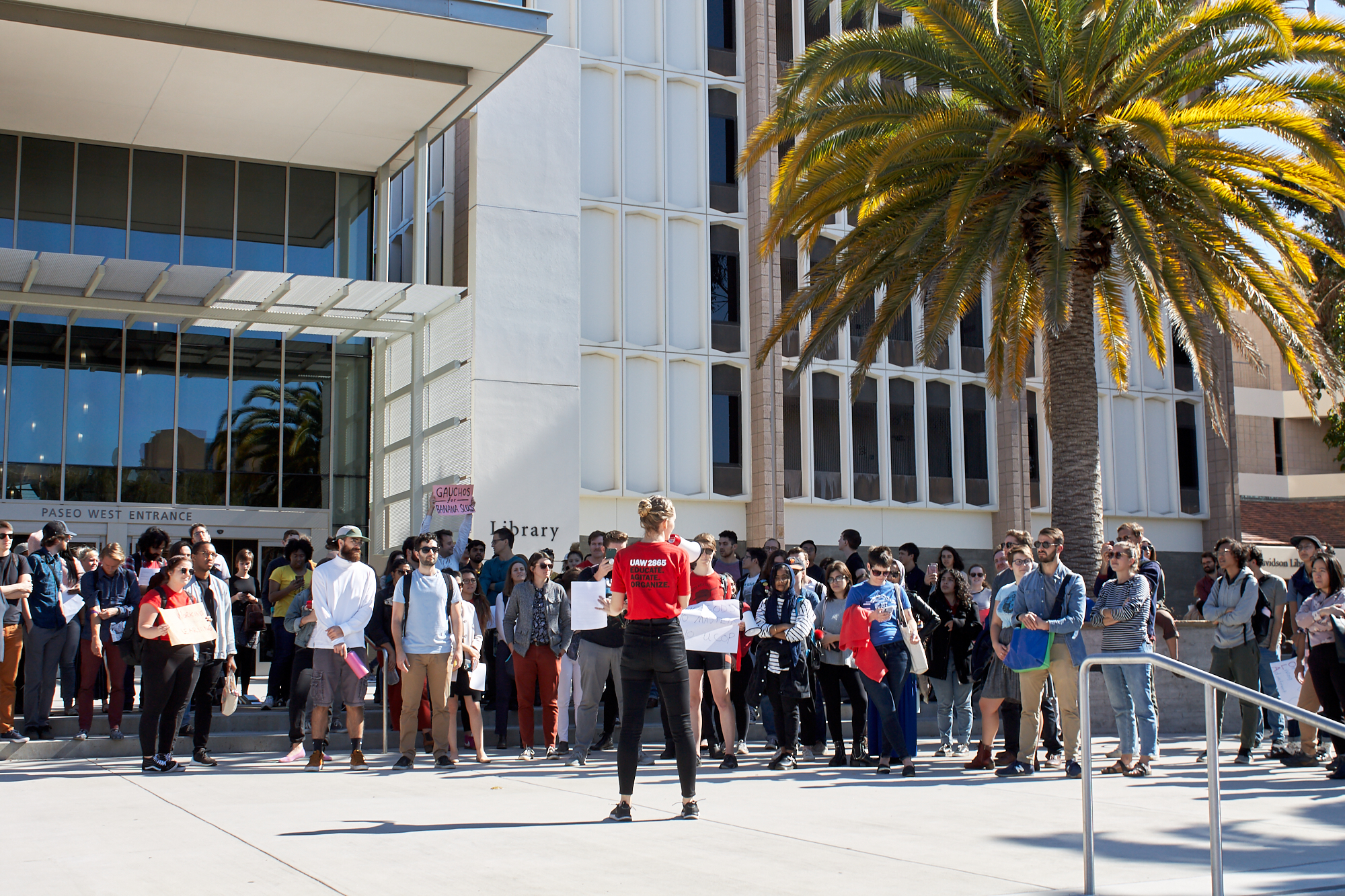 UCSB’s march for a cost-of-living adjustment was part of a larger movement across the UC; the movement is spearheaded by UC Santa Cruz, as UCSC graduate students began a wildcat strike – meaning a strike not authorized by their union – Monday morning, indefinitely halting office hours, sections and grading.

The presentation of official demands marks a turning point for the UCSB COLA movement. Graduate students have been organizing the demands since Jan. 21, when students held a “sick-out” in support of UCSC.

Emily, a first-year sociology graduate student who declined to give her last name, spoke to the crowd at the University Library on Monday about how the list of demands was created, noting that it was important that as many graduate student voices as possible were included.

“We read all the comments on the 994 surveys we got, we took it into consideration, we wrote these and this is what we came up with,” Emily told the crowd.

“All campuses across UC are organizing in some way for this COLA, and that’s how we’re going to get strength and prove to the administration that something’s got to change if we stand together.”

Lex Taylor, a third-year political science and economics major, also spoke to the crowd in front of the library, representing a handful of undergraduate students who marched in solidarity with graduate students.

“We are mostly taught by grad students. These are the people making sure this university is working … that we are going into our classes getting the education we deserve,” Taylor said.

Taylor also referenced the three-year long strike efforts by American Federation of State, County and Municipal Employees (AFSCME) union as a sign that COLA efforts can be successful too.

“AFSCME, for the last three years, striked on and off, and they won. Right now at Santa Cruz, grad students are starting to strike, we are about to give our demands all across the UCs and grad students are showing what they can do,” Taylor added.

After Emily read the demands aloud and several graduate students spoke regarding the need for COLA, the group marched from the University Library to the fifth floor of Cheadle Hall, where students presented the list of demands to Executive Vice Chancellor David Marshall.

Beyond asking for a COLA, the students’ demands included several stipulations: that the COLA amount will be recalculated annually to account for increases in housing costs, that a COLA will not come from an increase in graduate or undergraduate tuition, that the university will not retaliate in any form against those supporting or participating in the demand for a COLA and that the university will accommodate the higher financial needs of graduate students with children or dependent adults.

The demand letter also highlighted the COLA’s necessity and explained that the amount comes from calculating average graduate student income and housing costs in the local area, to determine what amount is necessary per month to keep graduate students from rent burden.

The letter explained that the baseline for a rent burden is 31%, meaning that 31% or more of an individual’s income goes towards housing. However, the average rent burden for graduate students at UCSB is 51%, as calculated by UAW 2865.

The stipend necessary to alleviate rent burden at UCSB is the fourth-highest stipend estimate in the UC system, behind Berkeley, Santa Cruz and Los Angeles, according to the UAW report.

Graduate students earn their income from a variety of different funding sources, such as fellowships, grants, teaching assistant positions and research. Because sources of income vary from student to student and may change on a quarterly basis, UCSB graduate students emphasized in the demands letter that they are asking for a cost-of-living adjustment that is dispersed each month through the year.

All UCSB graduate students, “regardless of their graduate program, department, year in program, residence, visa category, documentation, funding source, and employment status,” will receive the same COLA amount, according to demands.

In an email statement, UC Office of the President Associate Director for Media Relations Andrew Gordon stated that the strike at UCSC is “illegal,” adding that it “does not further the discussion on how to increase housing affordability for student employees.”

Gordon explained that the university reached a four-year contract with UAW in August 2018 and that the contract is in place through June 2020. He said that “while the University does not plan to reopen the signed and ratified contract with UAW, we did recently hold a meeting to discuss legitimate student concerns regarding housing.”

“UC appreciates the information provided by the UAW and the ongoing dialogue regarding affordable housing.”

Additional photos and coverage of the strike can be viewed here and here.

Grad students are perfectly free to find another job — no need to accept a job at the university if you feel like it doesn’t pay enough.