The Daily Nexus
Tennis
UCSB Continues Tough Non-Conference Stretch With Loss to No. 23 Arizona
February 10, 2020 at 12:53 pm by Annika Pearson 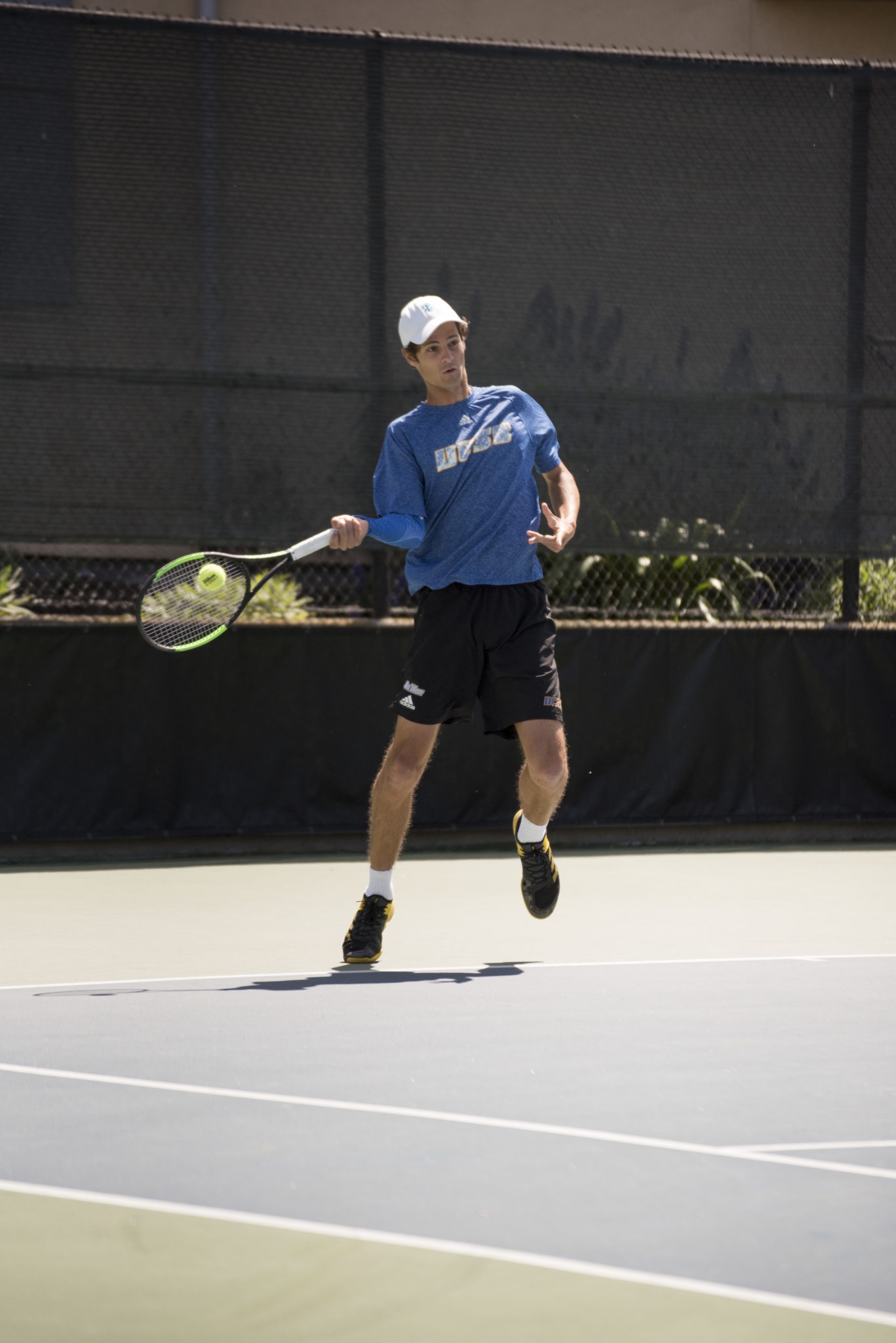 Set up for a nice serve. Siavash Ghadiri/Daily Nexus

The UCSB men’s tennis team took a brutal blow this Sunday from No. 23 University of Arizona. The 0-7 final score only added salt to Santa Barbara’s growing wound, pushing their record down to 2-6 on the season. The Wildcats, on the other hand, continue to boost their near-perfect record which now sits remarkably high at 9-1.

Still, Sunday’s showing proved to be a wake-up call for the Gaucho lineup that was knocked at every match of the day. Admittedly, as Arizona strutted into the dual match boasting an unmatchable range of statistics, it seemed the odds had already settled on the wrong side of the court. Before playing SB, the Wildcats’ singles and doubles records were each above .600.

Throughout the season and against the Gauchos as well, Arizona’s singles competitions have largely been led by junior Filip Malbasic, freshman Nick Lagaev and senior Alejandro Reguant — each of whom’s singles record lies above .775.

Co-captain Joseph Guillin, whose performance so far had earlier earned him the title of Big West Athlete of the Week, saw his second official loss of the season. The senior faced #76 Malbasic, the junior out of Stockholm who, as of a week ago, carried with him an impressive 16-4 overall record, going 7-2 in dual matches. The #8 athlete fell in identical 5-7 sets to Malbasic, making it the Gauchos’ fifth loss of the day.

Juniors Joseph Rotheram and Victor Krustev battled fiercely on courts two and four, each driving their stellar opponents to a third tiebreaker set. Rotheram had come out strong against Lagaev, beating him 6-4 in set one. But the rookie regained control and held Rotheram to just 3 points in the second set and was finally able to secure the win in the third. Versus Reguant, Krustev pulled out a redeeming 7-5 victory in his second set but ultimately lost the momentum going into the tiebreaker.

Sophomore Luka Vukmanovic struggled throughout his match which opened the day’s singles competitions. Vukmanovic was planted on the No. 5 court to face Carlos Hassey, the only member of Arizona’s starting lineup to come in with a solo record not greater than .500. In the first set, the Swiss athlete managed only 2 points compared to Hassey’s 6; in the second, the junior Arizona native kept him scoreless.

Santa Barbara’s performance on the doubles courts once again offered no relief. Guillin and 2020 partner Alejandro Vedri left their unfinished match leading 5-4. The rest — consisting of pairs Krustev and Rotheram, and Alex Soto and Vukmanovic — were unable to get their scores above 3.

This loss undoubtedly dug the Gauchos a little bit deeper into the hole that’s been growing since the start of the season. Compounded by the fact that Santa Barbara has only had one week that didn’t consist of traveling since January, it may be that what we need is a change of scenery — and one that lasts longer than just a game. UCSB will play just two more away games until they return to their home court for seven — hopefully redeeming — matches. For now, the team will turn their attention to the University of Minnesota who they will face this Saturday, Feb. 15.