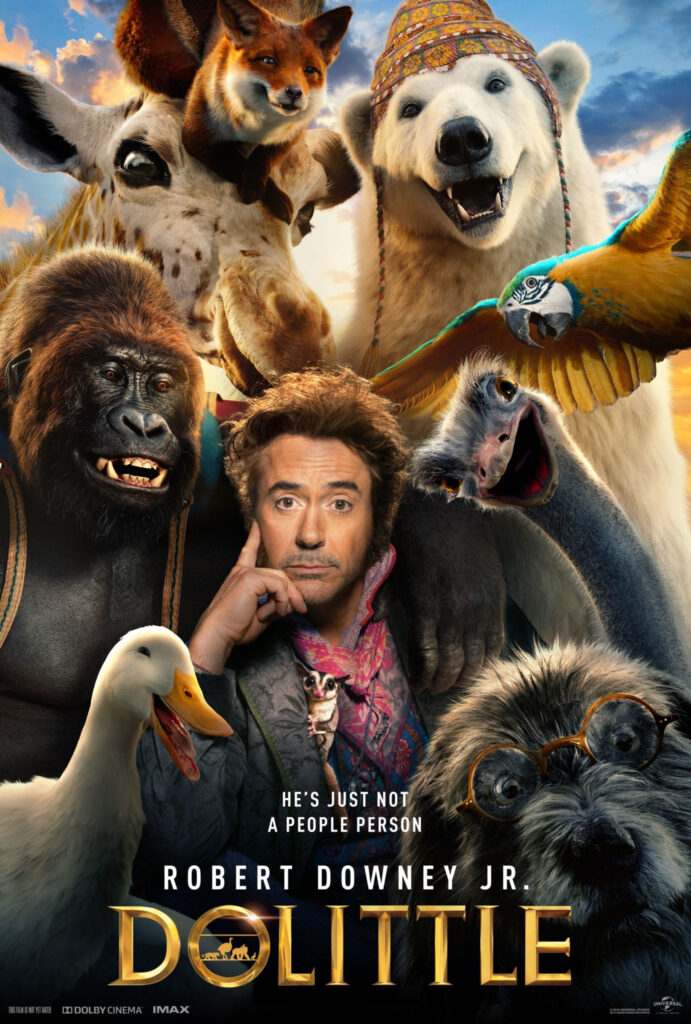 Robert Downey Jr.’s role as “Iron Man” has cast a very large shadow over his career. Downey’s time as Tony Stark, over a decade long, has yet to be beaten by the numerous other characters he has portrayed. I had wondered where Downey would go after leaving a multi-billion dollar franchise; never would I have guessed that the next character he would portray would be that of Dr. Dolittle. His new film, “Dolittle,” contains an all-star cast, including Selena Gomez, Antonio Banderas, Tom Holland, Emma Thompson and many more.

While Eddie Murphy’s take on the role is seen as a “classic,” at least through the eyes of a child, Downey’s take is very different — the entire story and its characters have no relation to Murphy’s 1998 “Dr. Dolittle.” The plot of the newest rendition consists of Dr. Dolittle living in solitude with his many exotic animals as he grieves the loss of his wife. He is then visited by attendants of Queen Victoria who seek Dolittle’s help in retrieving a cure for her. The action-packed film, with its both humorous and sentimental dialogue, primes it to be an enjoyable watch for all ages. With that being said, it does not exceed any more depth than that of a plain, generic family film.

The special effects were positively breathtaking, with every scene showcasing an abundance of vibrant colors. Though the scenes were stunning, they were often messy. The transitions between locations make your head want to spin, and they cram so many different obstacles in various locations that the development is completely lost.

As for Downey’s acting, his accent was different, and his overall portrayal was fun. Downey’s accent is not characteristic of a common British accent, but instead takes more of an eccentric approach. Halfway through the movie, you begin to realize why Downey doesn’t speak in the trailer — his accent is distracting, outrageous, and in other words, overdone. Playing such a serious and dramatic character for so many years, I can see why Downey agreed to join a project so light. Downey is a great actor and this role does not diminish his talent, but it also does not challenge him.

Stephen Gaghan directed “Dolittle,” which is quite a surprise considering that his past films consist of drama and crime, surely not that of CGI’d talking animals. Gaghan’s shots were very predictable and rather cliche in trying to draw out emotion from the audience. Gaghan’s jump to fantasy was a bit of a stretch, and he is much better suited within the drama and crime realm.

The music was scored by Danny Elfman, the same man who composed the music for films such as “Beetlejuice,” “Good Will Hunting,” the “Men in Black” franchise, Tim Burton’s “Corpse Bride” and the “Fifty Shades of Grey” franchise, just to name a few. The music for this film was objectively the best part of it. With such big movies already on Elfman’s roster, this comes as no surprise. The grand emotional strides of the strings and the suspenseful beats sweep you off your feet and wrap you in sweet and dramatic emotions.

Overall, a 6.5/10 rating, this movie is not something that anyone above the age of nine should be running to the theaters to see. This is simply another film looking for a profit, bringing nothing special or surprising to the table.

Correction: An earlier version of this article stated that “Dolittle” was a Disney film. “Dolittle” is a Universal Pictures film.