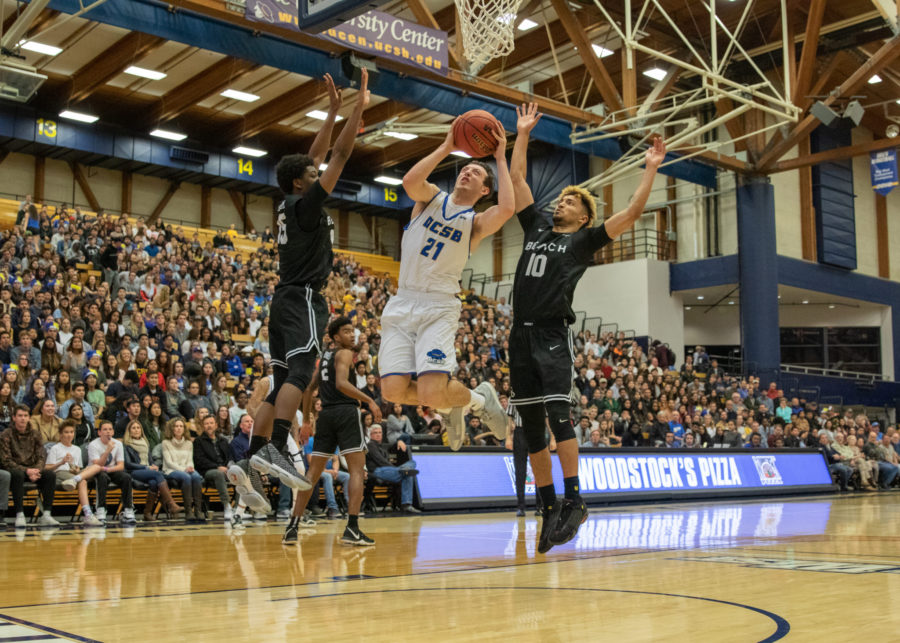 The last time the UC Santa Barbara men’s basketball team played Long Beach State, they lost thanks to one of the coldest shooting halves of the season. This time around, they couldn’t miss.

Graduate transfer forward Matt Freeman was the standard bearer for UCSB’s offensive explosion. Freeman finished with a season-high 24 points and seemed almost incapable of missing, going 9-11 on field goals and 6-7 on 3-pointers.

Freeman had struggled offensively in the games leading up to Saturday. The former Oklahoma Sooner hadn’t cracked double-digit points yet in 2020, but the turn of the calendar to February seemed to rejuvenate the stretch big .

The only flaw of Freeman’s game on Saturday was foul trouble, but even that was just a small roadblock. Limited to only six minutes in the second half, Freeman still managed to pour in 13 points on 5-5 shooting.

The Gauchos hardly skipped a beat, even with Freeman’s hot hand forced to take a seat. Senior guard Max Heidegger stepped up with 12 points and 7 assists in the second half and finished with a near triple-double of 14 points, 11 assists and 9 rebounds.

Sophomore big man Amadou Sow dominated the boards all game and finished with 14 total rebounds, 7 on offense and 7 on defense. Sow did most of his damage in the first half, but his presence inside helped open up opportunities for UCSB’s shooters.

The Gauchos helped their own case on offense by taking care of the ball better than they had all year. UCSB committed a season-low 8 turnovers and passed out 22 assists, tied for a season high.

The ball movement, hot shooting, post presence and a 21-24 team performance at the free-throw line all contributed to the 87-point performance, the Gauchos’ second-best scoring output this season. The 25-point margin of victory was UCSB’s largest of the season, a credit to the defense.

Long Beach State shot just 36.2% and committed 12 turnovers, which became 15 points for UCSB. The Beach didn’t shoot much better the first time they clashed with UCSB, but the Gauchos were a paltry 32% on their field goal tries that first time around.

It took UCSB over five minutes to crack double digits, and the two teams stayed more-or-less neck and neck throughout the first half, which ended with the Gauchos up 32-27. Both teams made just around a third of their shots, but Sow’s rebounding and Freeman’s shooting helped UCSB stay just ahead.

The second half was the Matt Freeman show from the first possession. Freeman scored on four of the Gauchos’ first six possessions and tallied 11 points in the first three and a half minutes of second-half action.

The aforementioned foul trouble forced Freeman to the bench in short order, but the damage was done. UCSB opened up an 11-point lead in those three and a half minutes, and LBSU never managed to close the gap again.

UCSB gets a few days off before hosting two games against the Big West’s best next week. The first is a Thursday matchup against Hawaii at 7 p.m. and the second is a Saturday game against UC Irvine, also at 7 p.m.