The Daily Nexus
Sports
TV Time in Northridge: UCSB Set for Quick Rematch Against CSUN
January 30, 2020 at 5:45 am by Nick DiPierro 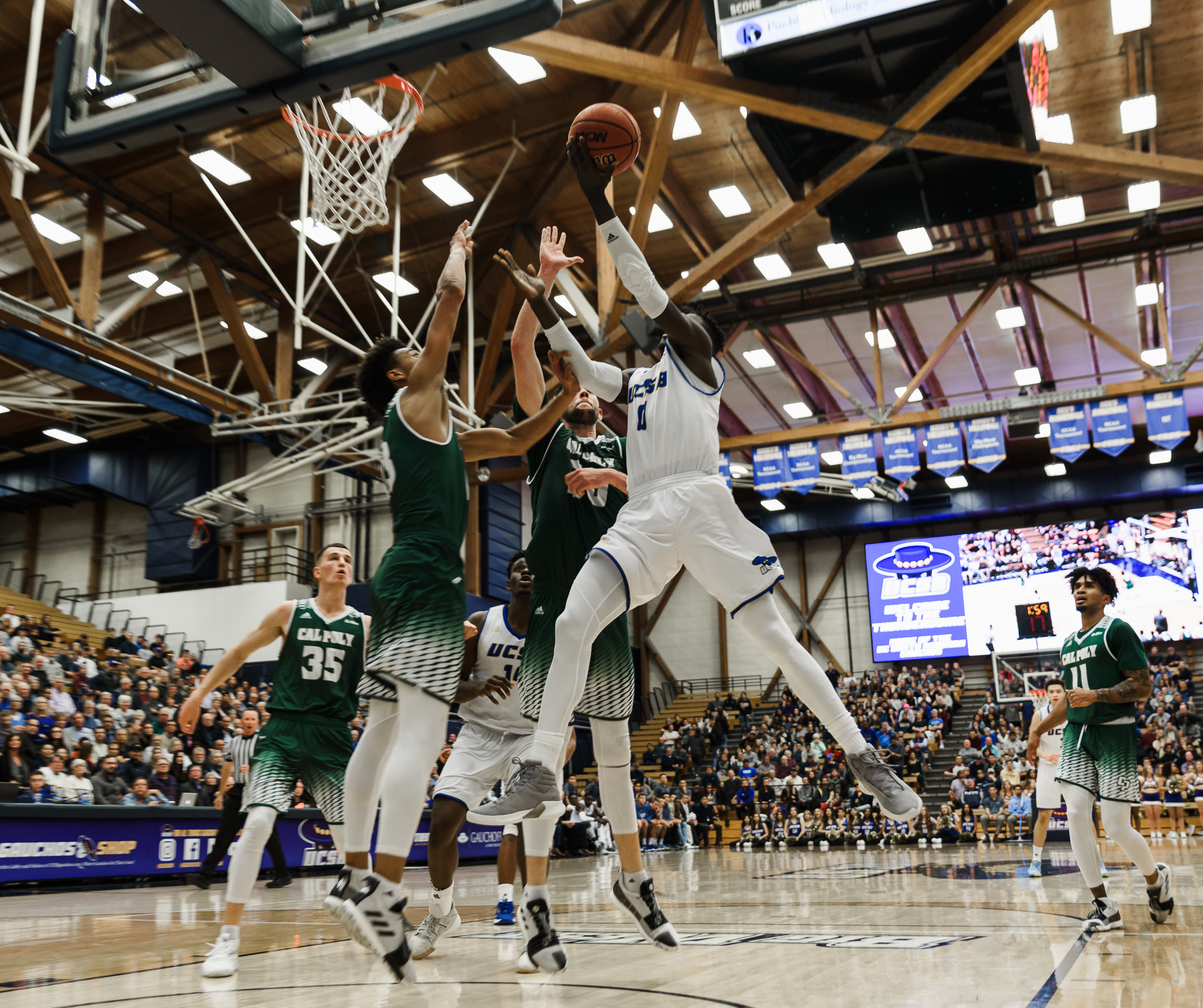 It’ll be TV time in Northridge Thursday night when the UC Santa Barbara men’s basketball team tips off against Cal State University, Northridge in a match televised on ESPNU.

It’s an 8 p.m. start time originally scheduled for 7 p.m., a change the Gauchos hope won’t interfere with their rhythm. Four of their last five games have tipped off at 7 p.m., the road match against Hawai’i being the only game to have started at 8 p.m. (HST).

UCSB will come into this match winners of their first game since the road opener against Cal Poly. In last Saturday’s Thunderdome throwdown against UC Riverside (UCR), the Gauchos climbed back from a game-long deficit to take their first lead at 54-53 with just 5:46 left to go.

Senior guard Max Heidegger’s 3-point dagger with 2.9 seconds left completed a comeback that was nothing short of great. With that basket, UCSB finished on top 65-63.

For himself, Heidegger is amidst an inspiring three-game run of form in which he’s averaged 19.3 points per game at a 55% clip. He’s also dished out 2.6 helpers and is hitting 34% from deep.

Of the past three games, Heidegger’s best performance was coincidentally the last meeting between these teams. In that game, despite losing, he finished with 21 points, 2 rebounds and 5 assists, and tied for second in the game in points.

Head coach Joe Pasternack is surely appreciating the rejuvenation he’s seen from his team since the introduction of the senior guard in the starting lineup. The main issue for the Gauchos seemed to be their efficiency from the floor, but Heidegger’s 55% showing over the past three games suggests he may be the answer. He’s one to watch in this Thursday’s game.

UCSB’s overall record hasn’t translated well to conference play yet and now they find themselves up against a Cal State University, Northridge (CSUN) team that has already bested them once. The Matadors’ 8-14 record goes to show that it ain’t just a cliche that anybody can win these games.

In fairness to CSUN, they’ve played much better than their overall record suggests, which is why looking at their performances in the more recent games can tell us a bit more.

Matador sophomore forward Lamine Diane is on fire right now, having scored 32 and 27 points, respectively, in each of the past two games after having missed his team’s matchup against UC Davis. Just prior to that, Diane led the way in CSUN’s dominant victory over UCR, finishing with 36 points, 9 rebounds, 1 assist, 2 blocks and 3 steals.

He’ll be a tough one to stop, but it’ll have to get done if the Gauchos are to steady the ship.

The Matadors have alternated wins and losses since their win over Long Beach State in the conference opener and sit at 3-3, in fifth-place in the Big West.

Diane is flanked by junior guard Terrell Gomez out of Los Angeles, California. Gomez, a member of last year’s All-Big West First Team, is bragging about his cover fire of 20.6 points per game.

He’s actually seventh on his team in FG%, but he leads the way with 36.9 minutes per game and is consistently knocking down baskets night in and night out. He’s also got a 93.5% clip from the line and still dishes out 2.5 helpers a game.

Other notable information to highlight include that Gaucho sophomore forward Amadou Sow has scored in double figures in five of the past six games and looks set to shoot with a green light on Thursday.

Junior guard JaQuori McLaughlin contributed, but struggled to have a more significant impact in the win over the Highlanders after sustaining a groin injury earlier in the week. Junior guard Brandon Cyrus, the probable replacement if McLaughlin needs a break, has made just 4 of his 20 shot attempts over the past four games. McLaughlin has averaged 14.8 points, 3.7 rebounds and 3.9 assists per game with a 48.9% efficiency from the floor and will surely be missed if he is not fully recovered.

UCSB will travel to CSUN for a match that tips off at 8 p.m. this Thursday. Match to be televised on ESPNU.