The Daily Nexus
News
RCSGD Personnel and Students Reconvene to Discuss 2017 Demands, Including Unmet Demand for New Building
January 30, 2020 at 12:25 am by Sean Crommelin

The Resource Center for Sexual and Gender Diversity hosted a town hall Tuesday afternoon, bringing together students and administrators alike to update the community on the progress of the demands made to the university in November 2017 after the controversial termination of the center’s former associate director Ale Muro. 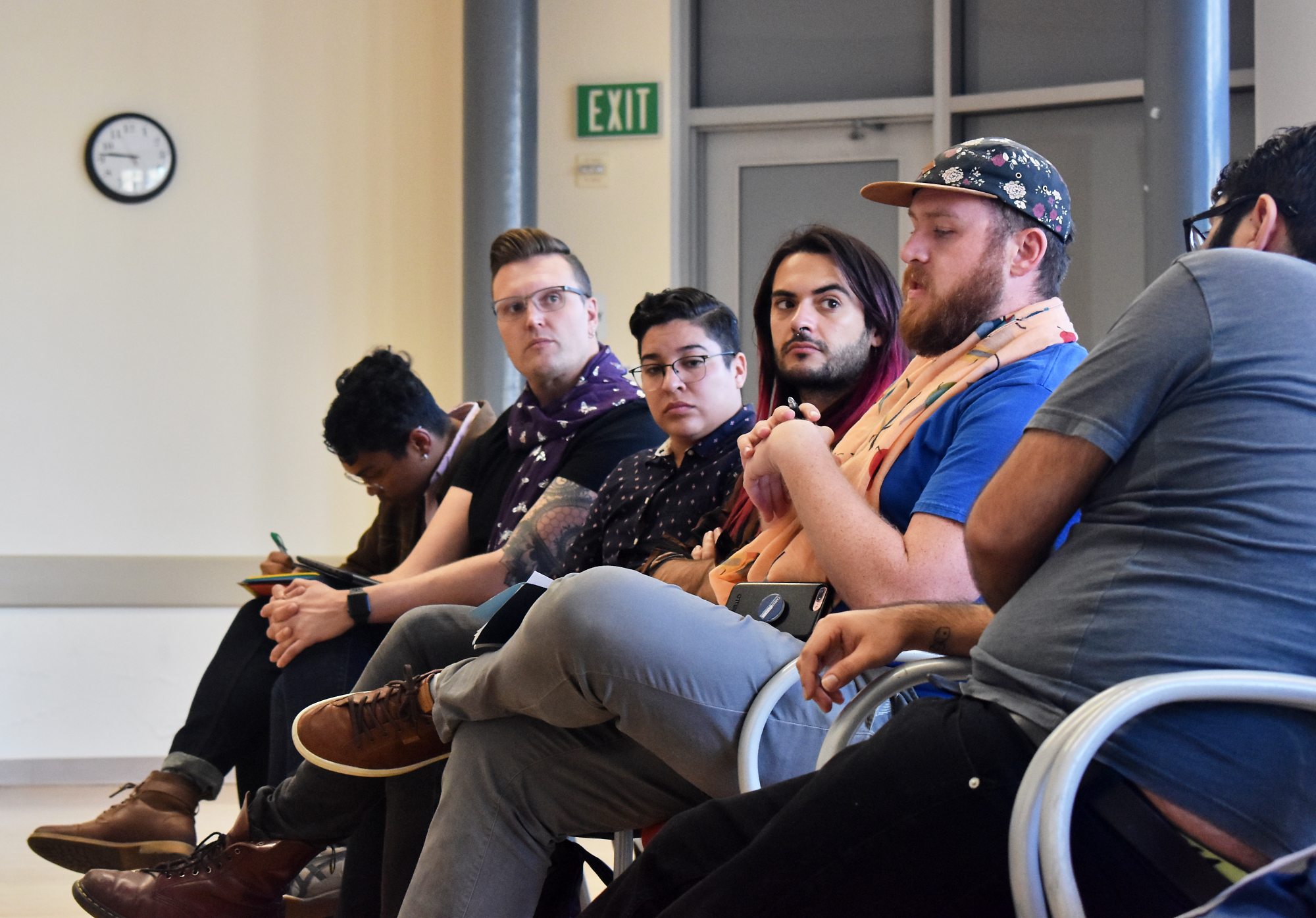 The discussion centered around how the RCSGD could go about finding a new location. Sean Crommelin / Daily Nexus

The demands in 2017 were written as a revision to a preexisting set of demands presented to Chancellor Henry T. Yang in 1998.

The 1998 demands called for the establishment of an LGBTQ+ resource center as well as a building in which to house the newly created organization and were meant to address the needs of LGBTQ+ students and provide more services and education, in addition to a space on campus for LGBTQ+ students. These demands ultimately resulted in the creation of the RCSGD in October 1999.

The 2017 demands called for the Resource Center for Sexual and Gender Diversity (RCSGD) to be separate from the jurisdiction of the Women, Gender and Sexual Equity Department (WGSE) — stating that their umbrella organization did not treat them fairly — for the RCSGD’s programming budget to be doubled and for the designation of a freestanding building for the RCSGD.

In addition, the demands called for a proper investigation into the circumstances surrounding Muro’s termination; the RCSGD and the WGSE disagreed about the extent of police presence during Muro’s firing.

Almost immediately, the RCSGD was removed from underneath the umbrella of the WGSE, and its programming budget was doubled.

Dwayne Mosbey, the programming coordinator of the RCSGD, said the center has seen an almost sixfold increase in growth between Spring 2019 and Fall 2019. In addition, event attendance has doubled in the same timeframe across 72 programs, which he pointed to as a sign of the program’s expansion.

“What this implies is that our center now has connections all throughout campus. So for students who find some of these services that are inaccessible on their own, we’re able to connect them with those resources,” Mosbey said.

Now two years later, with the majority of the 2017 demands met by the university, the largest and most costly demand is the last one left: the designation of a free-standing building for the RCSGD, which is currently housed in the Student Resource Building (SRB).

“This was one demand put on the list that we discussed with students at the time was going to take a while and [there] would be a much longer process [to it] than the other ones,” said Margaret Klawunn, vice chancellor for student affairs.

The discussion centered around how the RCSGD could go about either repurposing a building on campus, constructing a new building, creating multiple centers in various places in order to spread services across campus or even designate a location outside the bounds of the university in order to better serve members of the wider Goleta and Santa Barbara community.

Assistant Vice Chancellor and Dean of Student Life Katya Armistead suggested constructing a building to serve the aggregate needs of several organizations on campus. The Black Student Union has been calling for a freestanding center for Black students on campus for over 50 years; in March 2019, Yang agreed to provide funding for the creation of the Office of Black Student Development and to make the standalone building a priority in campus planning efforts.

“We have several groups, like the Office of Black Student Development, the Monarch Lounge; we’d like them to have some really nice space and then [it’d] probably be more cost effective to have another SRB for these groups.”

Armistead also discussed the possibility of establishing a location off-campus to serve as the RCSGD building, as well as potentially partnering with the Pacific Pride Foundation, an organization that provides “provides services to the HIV/AIDS and LGBTQ+ communities of Santa Barbara County,” according to its website.

Craig Leets, the RCSGD director, said the center could also establish temporary spaces on campus, which could be used by the RCSGD to provide better accessibility to students living in the Chi-5 residence halls and the eastern ends of campus, near the engineering building, for example.

“I know when I first got here, we had been talking about Isla Vista as where we needed more space, but I’ve noticed that here we seem to have some claim on this side of campus [near the SRB]. But I wonder about the middle of campus where Chi-5 is, and then the other side of campus,” Leets said.

“Honestly, where the engineering buildings are, I went there for the first time this summer. So like a year into my job here, I had never been over to that side of campus. I think we’re trying to think about how we can have temporary space in those places.”

Alexia Duran, a second-year undeclared student, suggested that the RCSGD allow students to have 24/7 access to the center “just for it to be a more accessible space for students,” citing the El Centro Arnulfo Casillas building.

“El Centro is open 24/7 and I’ve been there at 3 a.m. and I see people… [who] don’t have a house and students sometimes have to sleep on the couch. Having a space that would provide that for LGBTQ people would be necessary,” Duran said.

Armistead said the RCSGD could also be moved into a number of soon-to-be-vacated sites closer to the center of campus, allowing for greater accessibility and interconnectedness with the Chi-5 dorms.

However, several attendees objected to that idea, arguing that the buildings in that portion of campus were both old and in an undesirable state.

“You look at the Monarch Lounge, like it’s a pretty poor excuse for how we serve undocumented students. It’s a glorified portable, and relocating the RCSGD towards the center of campus will be probably within that space,” said Esmeralda Quintero, a third-year political science and sociology double major.

Armistead said that feasibility will be considered in the decision, but that support from students will be the deciding factor.

“We’re not moving the RCSGD at all without student support,” Armistead said.

“Do we have an exact plan? No. However, things are moving because of new development that’s happening. And so starting to identify our needs now will serve us well so that we can slide in and start moving towards a space that is going to be open in the future.”

Whenever I hear “demand”, I tune out.