The Daily Nexus
Sign of the Times
There Should Be No Expiration Date on Ending Sex Discrimination
January 23, 2020 at 9:50 am by Surya Swaroop

In the past week, Virginia has made significant progress in its push to ratify the Equal Rights Amendment. The Equal Rights Amendment (ERA) is an important amendment to pass because it establishes a crucial precedent that will firmly state in the Constitution that discrimination on the basis of sex is not allowed. As of now, the only aspect of the Constitution that even moderately represents an argument for equal rights is the Equal Protection Clause in the 14th Amendment. However, the clause does not explicitly prohibit discrimination on the basis of sex. The ERA also goes beyond women’s rights because it also applies to sexual orientation and gender identity. Adding the ERA to the Constitution would be meaningful for both women and the LGBTQ+ community. 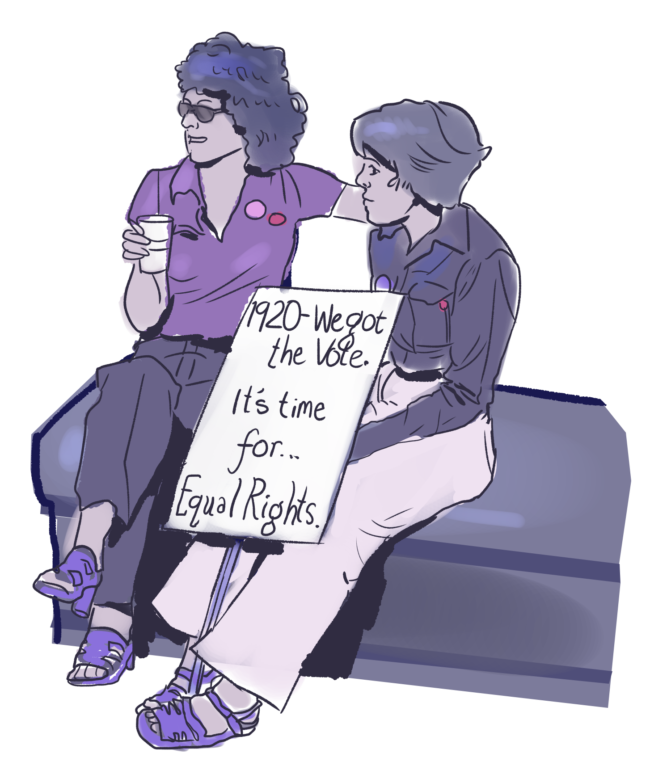 Virginia ultimately ratified the Amendment last Wednesday, Jan. 15, and became the 38th and final state needed for the ERA to achieve the approval it needs in order to become an addition to the Constitution. While this should be a moment of celebration, it is not that simple. The preamble to the ERA states that the amendment needed to be ratified by 1982, which has caused a huge debate as to whether or not the ERA can still be ratified today.

It is first important to understand the history of the ERA to get a better sense of why Virginia’s decision and the subsequent actions taken by Congress are so critical. The concept of having an amendment specifically for equal rights was first introduced in 1923 but took almost 50 years for it to pass Congress. It ultimately did so in 1972 and became the ERA that exists today. Thirty-five states were quick to ratify the amendment shortly after it was introduced, but the momentum tapered off in the ‘70s mainly due to the work of conservative activists like Phyllis Schlafly.

The resurgence of women’s rights activism due to events like the #MeToo Movement and the confirmation of Supreme Court Justice Brett Kavanaugh helped push Nevada and Illinois to ratify the amendment. Democrats in Virginia also tried to push the amendment through its state legislature in 2018, but the effort was unsuccessful due to the Republican majority in the state’s legislature at the time. Virginia is a recently flipped state, which means the Democrats are now in control of its legislature.

This was critical in the amendment passing last Wednesday. It is also significant that Virginia was the final state because Virginia has historically voted in a more conservative manner and it is a sign of progress that the state is moving in a new direction. In fact, it was United States v. Virginia in which Justice Ruth Bader Ginsberg wrote her now-famous majority opinion stating that discrimination on the basis of sex violated the Equal Protection Clause.

It is unacceptable that it has taken almost 100 years for the ERA to finally get the 38 states needed for its addition to the Constitution.

It is unacceptable that it has taken almost 100 years for the ERA to finally get the 38 states needed for its addition to the Constitution. It is even more unacceptable for the Republicans to use the weak argument of an arbitrary deadline to say that Virginia’s decision is essentially meaningless. The House Judiciary Committee is actively working on finding a way to eliminate the deadline. The solution they devised will likely pass the House, but it will have difficulty passing the Republican-controlled Senate. The Department of Justice issued a statement that said that Congress does not have the power to change the deadline. While this is certainly a setback in the momentum created by Virginia’s decision, legal experts are arguing that this is simply another barrier in a fight that has been riddled with obstacles.

It is also important to note that, when the ERA first passed in 1972, it received a good amount of bipartisan support. Unfortunately, over the years, the issue of combatting sex discrimination has become more of a partisan issue. This has rapidly increased under the Trump administration,  as Trump himself has made countless statements that portray women and the LGBTQ+ community in a negative and demeaning light. His appointment of Kavanaugh to the Supreme Court was perceived by many as Trump’s approval of the despicable manner in which Kavanaugh took advantage of and abused women. Additionally, Trump has attacked women’s reproductive rights through the passage of the Global Gag Rule, which is a measure that prohibits any government-funded women’s health clinic from discussing safe abortion practices.

Women deserve to be seen as equal rather than inferior. The United States needs to move away from its history of outdated social hierarchy and address the lack of equality plaguing its society. On a purely ethical level, it is deplorable that a woman in 2020 is still paid less than a man, does not have the ability to make her own decisions about her reproductive health, and is subject to blatant sex discrimination through no fault of her own.

The ERA is by no means a magic button that will automatically erase the systemic discrimination that has become a centuries-old practice in this country. It will, however, be a significant step in the right direction. The fight to add the ERA in the constitution — the fight for women to be represented in the document that is supposed to represent the values of the United States — is by no means over.

Surya Swaroop strongly believes that the Equal Rights Amendment must be added to the Constitution to eliminate unfair practices of sex discrimination.

We already have laws prohibiting sex discrimination. The problem with the ERA, which is why most states who originally ratified it would not do so again, was that it literally makes gender segregation of any sort illegal. This is why the most vocal opponents of it were women. Read a book please.

While pro-discrimination laws should never be tolerated, free handouts for the LGB (I didn’t say T because they don’t belong together) community doesn’t solve the problem, in my opinion, it only worsens it. Take the welfare state for instance. What started off as well-intended, has led to a sharp decline in the LFPR due to less incentives to work when someone will get paid to do nothing. The number of people on disability was 50:1 in the 00s, it is now 12:1. When there are more people in the wagon then there are pulling the wagon, the wagon is going… Read more »